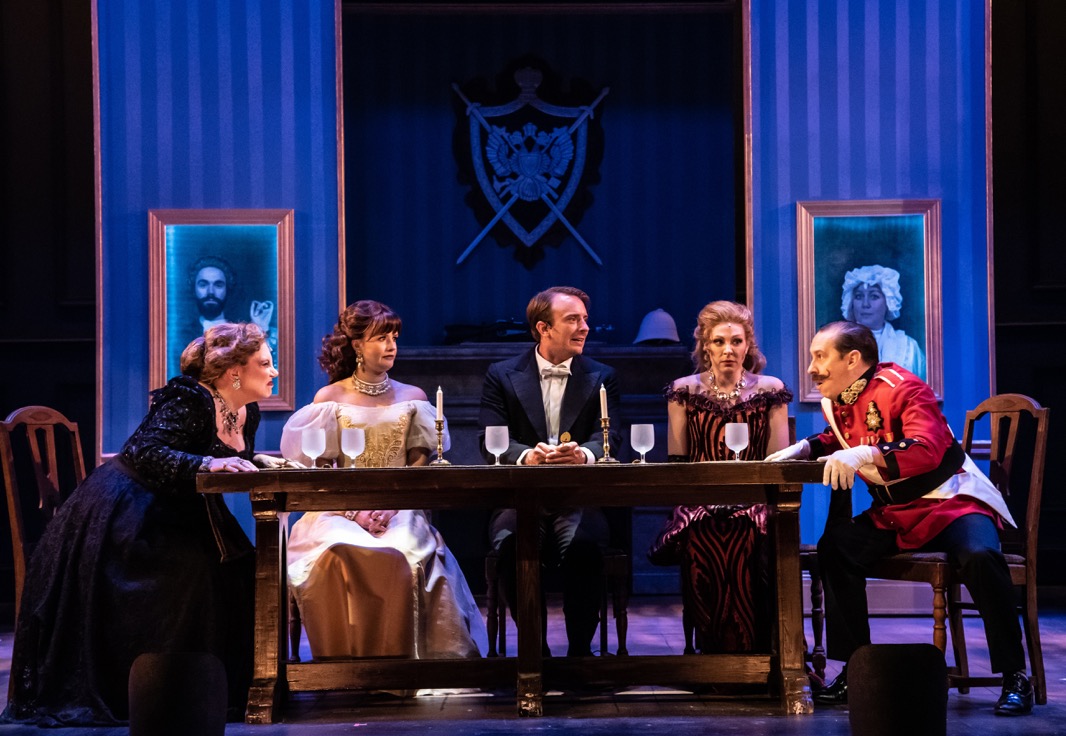 Scott Wichmann and Alexander Sapp share more than the stage in Virginia Rep’s current production of A Gentleman’s Guide to Love and Murder; they share a high level of energy and stamina that rivals an army of Energizer bunnies.

These two Richmond super-talents team up on stage along with a stellar ensemble cast to provide two-and-a-half hours of hilarity in this farcical whodunit.

The Tony Award-winning musical comedy tells the story of Monty Navarro (Sapp) who discovers when his mother passes away that he is part of the wealthy, aristocratic D’Ysquith Family (all members of which are played brilliantly by Wichmann) and related to the Earl. The family disowned Navarro’s mother when she married beneath the family’s stead in life.

To regain what is rightfully his, Navarro schemes to kill the eight D’Ysquith family members that stand in his way of becoming an Earl. Adding to the plot is a love triangle that puts Navarro is a precarious situation with the two women vying for his attention.

Kudos to director Kikau Alvaro for giving Wichmann and Sapp the room to weave their magic into the heart of this production and for casting choices and direction that make the musical shine.

Adrienne Eller (Phoebe D’Ysquith) and Grey Garrett (Sibella Hallward) play the two love interests of Navarro. Both have comic chops and powerful voices that soar to the balcony.

Debra Wagoner, who plays Marietta Shingle and is part of the ensemble, starts off the show on a high comedic note.

Sapp is quite dashing in his role as Navarro and takes the character on an arc that leads to a strange web of lies and coincidental murders. The fact that he’s onstage during the entire production is a feat itself, but he carries it off with a level of energy that doesn’t fade. And did I mention he has a divine voice?

Wichmann’s portrayal of eight D’Ysquith family members is a tour-de-force that leads to some hilarious situations. His roles are both male to female and require physical, vocal, and personality makeovers. And he does it with ease and finesse. Wichmann is a master when it comes to character acting and his work in this production shows you why.

I couldn’t end this review without mentioning other elements of the show. Wichmann’s costume changes – thanks to some fast dressers and costume designs by Sue Griffin – are pure magic. He goes off stage and returns in seconds as an entirely different character. It’s amazing. Chris Raintree’s scenic designs hit the mark and provide the flexibility to move with the action in a seamless manner.

A Gentleman’s Guide to Love and Murder provides the comic escapism that we sorely need in today’s society. It’s a goofy, fun production that will have you laughing. The show is suitable for twelve and up. It runs through October 20 at the November Theatre.