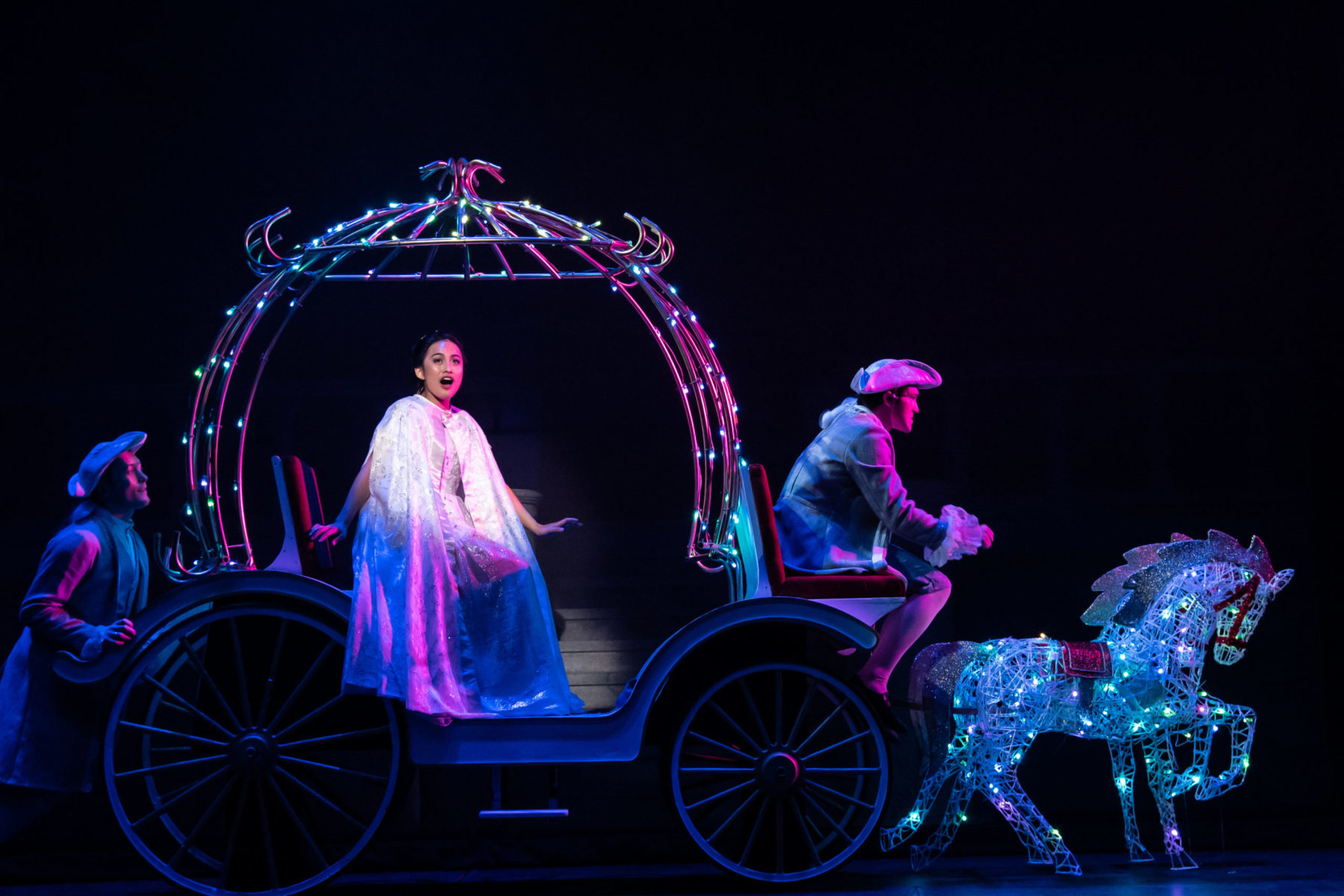 Enchanting and charming are two words often associated with the classic fairy tale, Cinderella. I would add amusing and inspiring to describe Virginia Rep’s production. Rodgers and Hammerstein’s Cinderella keeps the framework of the familiar tale, but adds its own messages of social injustice. As a Disney fanatic, I am no stranger to the iconic plot of the ash-covered maiden who resides with her evil stepmother and stepsisters. A string of events that include a fairy godmother, pumpkin, and glass slipper, ostensibly ends the chance of true love once the clock strikes midnight.

Gone are the days of two strangers falling in love after dancing at the ball one magical night. Audience members will enjoy seeing the development of not only Cinderella, but also Prince Topher, played by Edward L. Simon. We stand witness to the two’s first encounter, long before the ball. After meeting Prince Topher, albeit a bit silly and playful, we learn why Cinderella who goes by Ella, finds him so special. I must admit that I am a sucker for a love story that comes full circle; the seeds are planted from the very beginning that allow us to watch the relationship bloom.

Kindness has always been a lesson that Cinderella’s character has taught us. Rodgers & Hammerstein’s version provides viewers real-life examples that we all can follow, such as how to treat others who are in need. There are several examples of kind gestures sprinkled throughout Ella’s interactions with different characters which unite Cinderella and Prince Topher from the onset.

One thing that has remained true from the original tale is the evil stepmother barking commands; in comparison, it was refreshing to see one of the stepsisters, Gabrielle, (Havy Nguyen), display signs of sympathy and compassion to Ella. Though it usually didn’t last long, interrupted by the stepmother’s spite or retorts by the absolutely hilarious and overly confident stepsister, Charlotte (Audra Honaker).

Viewers get to see more of the backdrop of Prince Topher’s kingdom, and all isn’t pleasant on the home front. Many are unhappy with how the poor are being treated. In particular, one gentleman, who we learn is connected to one of Ella’s stepsisters, wants change. Ella wants to help her friend get the message to the prince, and what better time than at the ball? At this point, I found myself wanting to give Ella a high five! She wants to attend the ball not to meet the prince and fall in love, but to inform him about the injustices happening in his kingdom.

Before she can attend, she must change from rags to assumed riches. Although Ella’s fairy godmother experiences a makeover of her own (you must watch and see), she does an outstanding job of serenading us to believe that “It’s Possible” as clothing and creatures are transformed. Whenever Katrinah Carol Lewis (the fairy godmother known as Marie) and Quynh-My Luu (Ella) joined for a duet, we knew something magical was about to occur.

There are two love stories running parallel and both include forbidden love and someone who is considered ‘entirely unsuitable.’ As with any traditional fairy tale, true love (and friendship which is emphasized in this version), wins.

Audiences will enjoy watching Ella, the MVP, take fate into her own hands with an ingenious move involving her glass slipper. She definitely shows females that someone can fall in love with you for more than your beauty, and that together, you can change the world.

A perfect show for the family, audience members of all ages will experience a fun night complete with ballads and upbeat numbers. Kids (and adults) will enjoy the recurring appearances by a couple of furry creatures (be on the lookout). The seamless magical costume changes with the fairy godmother’s flick of her wand kept the audience entranced. The choreography was on point and only enhanced the talented ensemble’s performance. The mood is cheerful and the musical is laced with comedy that make it fun and joyful and a perfect fit for the holiday season. Just like a certain glass slipper!

Ashley Hewlett is a mom, educator, and the author of “Cailey’s Best Day,” a picture book about an energetic little girl who loves trying new things. An educator for thirteen years, she has enjoyed connecting with kids and families in her roles as an English teacher and specialty center coordinator. She lives in Chesterfield with her family.