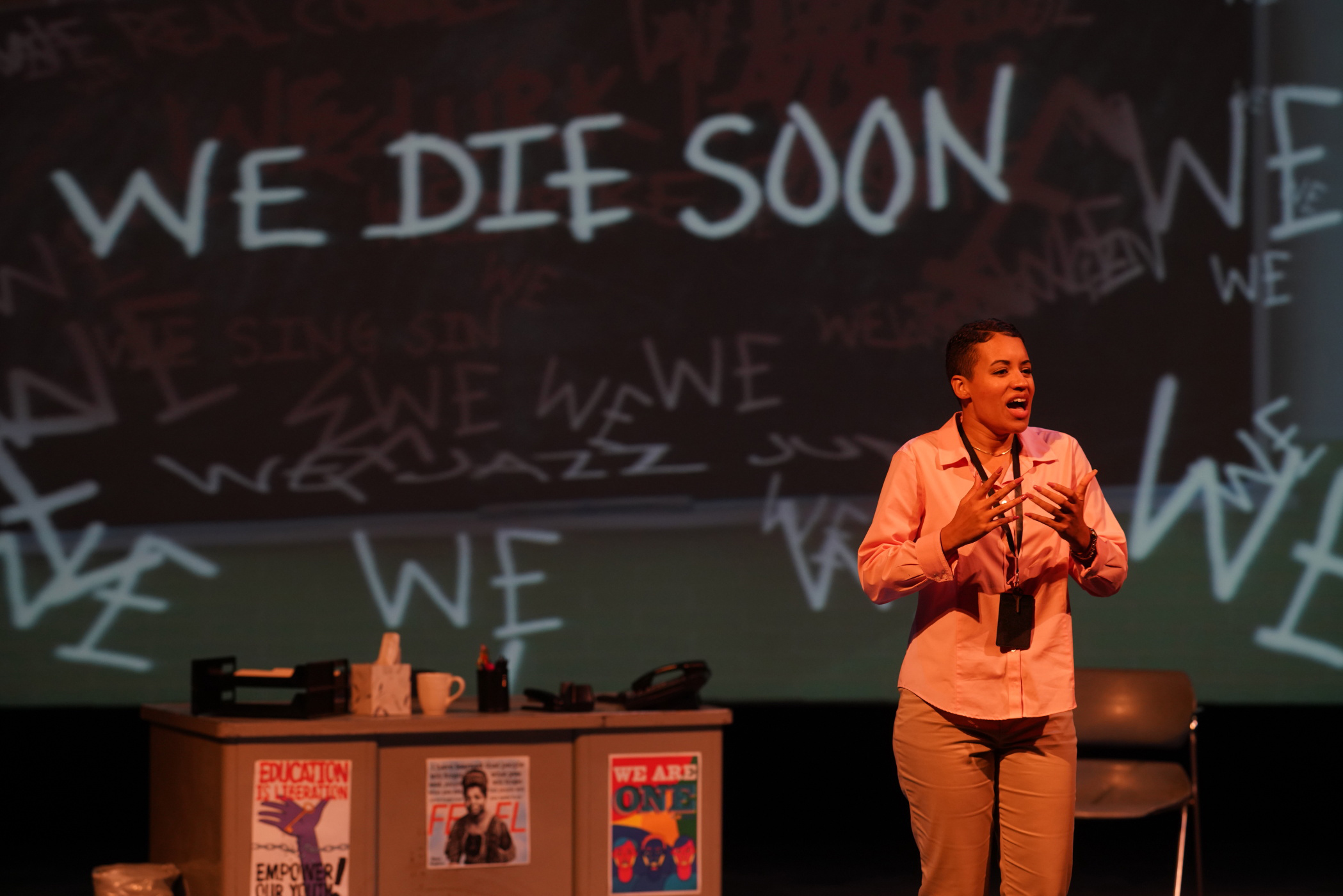 It’s rare to have the chance to hear the voices of people on the front lines of a violent school clash – the voices you might hear on the news. But through art, the voices ring clear as Virginia Rep offers audiences the opportunity to explore the humanity of those most impacted by the school-to-prison pipeline.

Written by award-winning playwright Dominique Morisseau, Pipeline is a searing drama centered on some of the underlying issues of race in education. Based on Morisseau’s own experience as a teacher in Detroit for sixteen years, we get to see multiple points of view as Naya, played by Sasha Wakefield and her son, Omari, played by Trevor Lawson, find themselves struggling separately in both an inner-city public school system and private education setting.

Naya is a public high school English teacher and a single mother whose son, we learn at the top of the play, is on the brink of being expelled for an altercation at the private school that he attends. Deeply layered into the conflict is the fact that Omari is one of few Black students at a predominantly white school. Naya wrestles with what ultimately might feel like a nightmare to any parent dealing with disciplinary action against their child, but in reality has far more life-altering implications for Omari. She is also attempting to console her fellow teacher in duress, Laurie (played by Laine Satterfield), and empower her own students to break down the barriers in a system that seems to be failing them.

As Omari deals with the ramifications of what has happened at his school, we get a powerful glimpse into the sources of his anger. Dun, a warm-hearted school security guard played by Todd Patterson, shares this wisdom about the emotional cauldron being stirred up in his workplace: “The source of these fights is older than the bricks in this building. You have to know the source of the rage.”

The scenic design by Brian Barker and lighting design by Steven Koehler does much to intimate the environment as well as evoke the looming presence of a space as dehumanizing as a public school building in an under-resourced and marginalized community. The set somehow appears both vast and isolating with an intriguing illusion of depth. A long stark hallway with a large gate upstage represents the prison bar-like gates that are often found in inner-city schools. At times, actors are confined to pools of light as they ruminate on their own limitations. There are moments where the urgency of Naya’s words, “He needs more space to be,” are keenly felt and supported by the environment created on stage.

Projections designed by Dasia Gregg envelop each scene. Flashing across the screen pre-show are book covers of some of the heavy hitters in the canon of racial justice fiction and nonfiction including: I Know Why the Caged Bird Sings, Native Son, The Hate U Give, The New Jim Crow, and Stamped. This places the play squarely in the category of other works that seek to promote understanding of how race plays a role in our human experiences. Throughout the show, other projections play an important supporting role in adding context to the drama on stage.

Naya’s story deeply resonated with me as a single parent who has spent many years navigating the murky waters of attempting to give my children the best opportunities within our educational systems. Indeed, the story highlights the very real fears and biases faced by many BIPOC families who choose to place their students in educational settings where they are in the minority. The character of Omari’s girlfriend, Jasmine, played by Jessie Jordan, is also carefully written not only as an ally to Omari, but as a powerful voice in her own right as to the experiences of young Black women in these settings.

One universal theme all parents will find relatable is a sense of hopelessness on what to do about and for our children in difficult circumstances. At one point, Naya sits back and declares: “I’m going to sit here and wait for the instructions.” There is a well-earned moment of solace for the audience near the play’s end, however. In fact, I got chills when Omari relays some guidelines he’s written that includes some of the best parenting advice I’ve heard to date.

Other themes of complicated family dynamics, belonging, young love, freedom, teacher burnout, and public versus private education are just as deftly woven throughout.

Under the direction of award winning actress and director, Katrinah Carol Lewis, the cast works hard to bring the urgency of this timely story to the audience with rapid fire delivery in ninety minutes without intermission.

Pipeline runs through November 7 at Virginia Rep’s November Theatre and is most appropriate for ages fourteen and up with strong language and themes. For families and educators, a study guide is provided online. For showtimes, tickets, and Virginia Rep’s safety protocol, go here.

Lucretia Marie Anderson (they/them) is a mother of two, a former middle school teacher, founder of Joyful Muse Co, LLC, and a certified life and mindfulness coach who specializes in conscious parenting and anti-racist coaching. They are also the manager of historical education at Maymont Foundation.