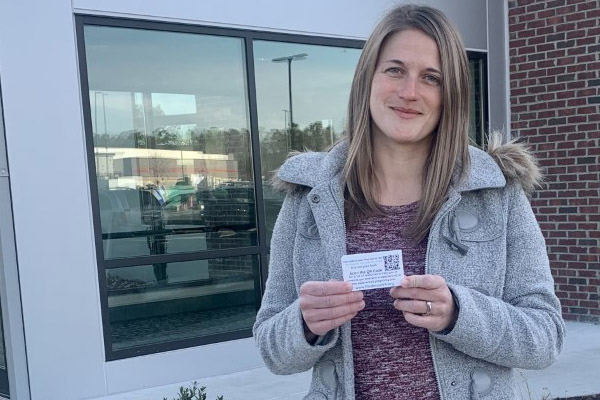 Virginia Physicians for Women patient Rachel Ramirez experienced three miscarriages in five pregnancies. Now she is sharing her story and the resources that helped her through it.

My name is Rachel Ramirez, and I have been a patient of VPFW and Dr. Mark Hyde since 2004. In the past four years, I have given birth to two sweet and healthy boys, but I’ve also experienced three first-trimester pregnancy losses. My mother had four miscarriages in the 80s – one in between each of her five children – so I grew up being aware of pregnancy loss and knew there was always a possibility for complications. But I always hoped and prayed that miscarriage wouldn’t be part of my story.

My older sister had three easy pregnancies and three healthy boys, so I thought that was a good sign that I might also have a smooth journey to motherhood. That sense of confidence was shattered when I started bleeding at six weeks pregnant with my first little one. I became pregnant again the very next month, but after a test of my human chorionic gonadotropin (hCG – also known as the pregnancy hormone) levels, it was evident that our second baby was not going to make it either.

My husband and I waited three months before trying again. Much to our delight, this time we went on to have an easy pregnancy with my oldest son who was born in August 2018.

We hadn’t even started trying for another baby when we found out I was pregnant in July 2020. After passing the six-week milestone, I felt like I was in the clear; but sadly, at my eight-week ultrasound appointment, I experienced the awful shock that no fetal heartbeat was detected. A missed miscarriage (one that happens without any symptoms such as bleeding or pain), and a dilation and curettage (D&C) a few weeks later left my head spinning.

Through genetic testing, we found out that this little one was a baby girl who had devastating chromosomal abnormalities that were not passed down from my husband or me but were completely random. Her tiny heart had stopped beating at six weeks, just like two of her siblings.

In January 2021, we found out I was pregnant again, and this time I gave birth to a little boy in September 2021. During this pregnancy, I reflected on how three of my five pregnancies had resulted in miscarriage and how I coped (and was still coping) with those losses. I had known miscarriage was a possibility for me, but I didn’t know the feelings of despair, grief and sorrow that would follow. Dr. Hyde assured me each time that it wasn’t my fault, and my husband and family provided comfort. But my heart had so many questions. I found answers scattered around the internet.

With everything I had been through and learned along the way, I wanted to help other women who were experiencing pregnancy loss. I created FindHopeVA.org, a simple website with a list of the most helpful pregnancy loss resources I had found, in hopes that it could bring information and a supportive community to others suffering when they needed it most. Check them out at FindHopeRVA.org and please share them with anyone who may need them.

To help women understand just how common pregnancy loss is and why it happens, I have also worked with Dr. Hyde at VPFW to answer some common questions about miscarriage.

Why does miscarriage happen in early pregnancy? (It’s NOT your fault!)

How common is early pregnancy loss?

Pregnancy loss happens in about 1 in 5 known pregnancies. Even though it is common, a lot of women don’t share or know how to share the news of pregnancy loss with friends and family. This is especially true if the loss occurs before she has even shared that she is expecting. Many women have found that sharing the news of a miscarriage with a few or many people can help relieve some of the feelings of isolation associated with pregnancy loss.

Is it possible to become pregnant again following a miscarriage?

Yes! According to ACOG, a first-trimester pregnancy loss is usually a one-time event. Most women go on to have normal pregnancies, and multiple losses are rare.

What are some things you wish you had known when you were going through pregnancy loss?

Although Dr. Hyde assured me each time that it was NOT my fault, I naturally questioned everything I had done during my pregnancy, from hikes to bike rides. After the genetic testing with my third loss confirmed the random genetic abnormalities, I was finally able to fully accept the truth that Dr. Hyde had told me from the first loss: “It’s not your fault.”

The online communities I have discovered where women have found the freedom to share their stories of loss have taught me that I am not alone.

What kinds of questions might a patient ask their doctor after a miscarriage?

I’d recommend asking whether there are any genetic tests that can be done, either with your baby or with you and your partner. You can also ask if there are any risk factors that you should be aware of. Lastly, you can ask if there is any need to give your body a chance to heal before trying to conceive and potentially becoming pregnant again.

Any advice for women who are experiencing pregnancy loss?

Women experiencing pregnancy loss need to know that they’re not alone, even if none of their family and friends have ever talked about this type of loss. If you or someone you love has experienced pregnancy loss, I recommend finding an outlet to talk about your story and all the feelings you may have had (or still have), such as sorrow, grief, guilt, or shame. Talking or journaling about the experience can help you process the loss and bring healing. One online community that helps women share their stories and find joy after loss is the Joyful Mourning. You can join the Joyful Mourning community here. I even shared my own story as a guest on the Joyful Mourning podcast.

What pregnancy loss resources did you find most helpful?

The resources I found were spread out all over the internet. It was this realization that inspired me to compile a list of those that were most helpful. I found medical articles, websites, podcasts, support groups, blogs, online communities, videos, music, books, and quotes.

You can see the full list of the most helpful resources I’ve found here. I hope it can provide the answers and support you need and that you’ll share it with others who are suffering. Feel free to reach out to me at FindHopeVA@gmail.com.

Virginia Physicians for Women patient Rachel Ramirez has been the Executive Director at the Lifelong Learning Institute in Chesterfield since March 2014. She previously worked in IT and as a Financial Team Manager for a nonprofit, an Assistant Branch Manager with First Market Bank in Richmond, and a Store Manager at Starbucks Coffee Company.

Rachel has enjoyed attending and serving with Cloverhill Church since 2004 and is grateful for the opportunities she has had to work with Give Hope 2 Kids, a children’s home in the mountains of Honduras. She currently serves on the Board of Directors for Give Hope 2 Kids and the Mercy Mall of VA.

Rachel earned a bachelor’s degree in Organizational Leadership and Management from Regent University and a master’s degree in Public Administration with a graduate certificate in Nonprofit Management from VCU. Rachel and her husband, Luis, live in Midlothian and love spending time with family and friends, traveling, hiking, and camping. They have a son who turned three in August 2021, and another son born in September 2021. Both were delivered by VPFW doctors.