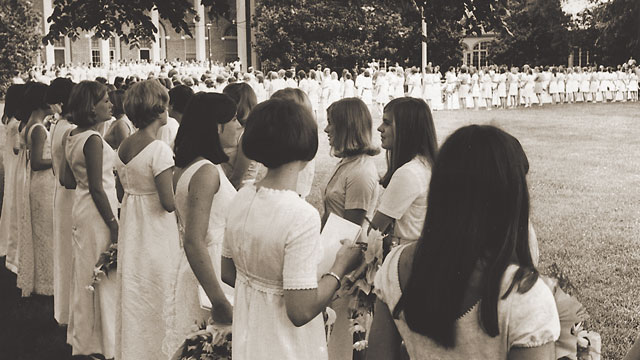 In 1890, Virginia Randolph Ellett opened a small school out of her home on Grace Street in downtown Richmond. Her students, many of whom came from the families of Richmond’s influential leaders, always referred to her as “Miss Jennie.”

Beginning with about a dozen girls and four boys, enrollment steadily increased, and by 1897, she had moved the school to Linden Row on Franklin Street. By that time, she accepted only female students.

Ellett developed a strong curriculum and set high academic standards with the establishment of St. Catherine’s School, especially in comparison to other girls’ schools at the time. She combined a classical curriculum with leading-edge methodology that included preschool programming, experiential learning, exercise, and outdoor play. From the age of six, girls were taught French and German, in addition to reading, spelling, writing, math, poetry, and geography.

As early as 1895, Bryn Mawr College recognized the school as one of the few southern institutions whose female graduates were prepared for college rigor. As a result of Ellett’s efforts, in 1904, Richmond became one of only eight cities in the world where the Bryn Mawr entrance examination (precursor of the college board) was administered to women. “Miss Jennie’s School” was the first school in Richmond to send girls to college.

In 1917, the school was incorporated and moved to its present site in the Westhampton area of Richmond. It was sold to the Episcopal Church in 1920 and renamed for the patron saint of young women. Miss Jennie, who had relinquished her post as head of school some years before, continued to teach and live at the school until her death in 1939. The school is still in operation today and renowned for its education.