A Visit to the Black History Museum

Our children are bombarded with news of racially motivated crime. White police officers killing innocent black men. Black men killing blameless police officers. How do we begin to explain the roots of racial intolerance to our children?

My friend, Susan, and I embraced a mission and set out to educate her 13-year-old daughter and a friend about the origins of prejudice and injustice in America. Our destination? The Black History Museum and Cultural Center of Virginia in Richmond’s Jackson Ward.

Susan and I are no strangers to African American culture and history. We both grew up during the Civil Rights Movement. Susan’s family lived in Wilmington, Delaware, in a poor, predominately black neighborhood where she stood out among her playmates, her milk-white skin and flaming red hair were easy to spot.

Raised in a segregated Virginia town in the 1960s, I understood at a young age that our housekeeper, Gertie, had to follow different rules. By the time I attended middle school, it was clear to me that being a Jew, and one of two Jewish families in the entire town, was much easier than being “colored.”

The group touring the museum that day – two moms and two teens – was a representation of America’s melting pot. Susan, with her fair Irish skin and strawberry-blond hair, was followed by her adopted daughter, Sophie Rose, a beautiful mix of African American, Asian, and Irish heritages. With us was Miles, Sophie Rose’s friend, a handsome African American teen with a high flattop of perfectly manicured hair. And finally, there’s me,
an olive-skinned Eastern European Jew, the obvious, but wrong, choice for being the mother of both teens.

In the museum’s sunlit foyer, we were welcomed at the reception desk and purchased our tickets. We decided to join a formal tour with a group of elementary and middle school students who were enrolled in a summer arts program. By the end of the tour, we knew that was a good decision. The tour guide did an excellent job of highlighting important historical information as well as entertaining us with interesting facts about the exhibits.

Interactive touch screens, a child’s playground for learning in today’s museum settings, displayed a pictorial history of black America – from the Civil War through emancipation, reconstruction, and the Civil Rights era. To prevent new information overload, it’s probably helpful for children to come to the museum with some basic knowledge of black history.

I was awed by the sculpted tree in the first gallery. The caramel-colored wood trunk and arched branches stretched from floor to ceiling, a symbol of the oak tree still standing on the Hampton University campus where the Emancipation Proclamation freeing slaves was first read on January 1, 1863. I waited to use the touch screens to learn more, while the children eagerly operated the high-tech monitors for a glimpse into the past.

Thirteen feet tall, white, and holding a tennis racket in one hand and a Bible in the other, a statue of Arthur Ashe dominates the next gallery. Our tour guide explained that this was the first model the artist created before completing the final statue on Monument Avenue. Though ironic, Arthur Ashe sculpted in white plaster seemed fitting for this courageous man who broke down barriers in order to participate in a white sport, then exceeded expectations by becoming a world champion tennis player. Even the most restless child on our tour stood quietly in front of this memorialized man who opened the door for other African American tennis players, like the Williams sisters and James Blake.

Flat-screen panels line the back hallway of the first floor. The group’s tour guide instructed us to touch one or more of the dates on any screen. Like magic, events in black history corresponding to each year popped up as mini-news stories – a delight to those interested in finding out what historical events happened on their birth date or other occasions. But consider yourself warned: This display could keep children entertained beyond the patience level of many adults.

Some of the most interesting exhibits for children were upstairs, where television shows, cartoons, children’s books, and comics depict the history of African Americans in the media. Sophie Rose and Miles recognized Scooby Doo and Fat Albert. I felt ancient as I provided some of the background behind The Story of Little Black Sambo, then listened to a film clip about why the book was banned, along with other books and films, once considered mainstream, which stereotyped black people.

At the end of the tour with the school children, I thanked our guide, a middle-aged African American woman, and shared my story. I told her about my family’s housekeeper, Gertie, and how we used to sit in the movie theater balcony. “Of course, she couldn’t sit downstairs during segregation,” I added. “I was only six, but I knew it was wrong.” A silent understanding passed between us, an unspoken intimacy. And in that moment, both of us were aware of the continuing struggle for black Americans.

On our own now and back on the museum’s first floor, Sophie Rose and Miles sat at the mock Woolworth’s counter. Susan and I explained the once-segregated eating areas and how African Americans living in Greensboro, North Carolina, in 1960 refused to move from the designated “white counter” to protest inequality. Sophie Rose and Miles appeared clueless as to why anyone would prevent a black person from sitting at a food counter. Their response gave me hope for the future.

In America today, children and young adults are aware of racism, they talk about its impact on our communities, and they’re developing appropriate ways of responding to it. It’s my hope that one day, when Sophie Rose and Miles witness an injustice precipitated by a person’s skin color, they will connect the dots to the history documented here at the Black History Museum and realize some people are still living in the past. In this new year, may we all strive to achieve a future that includes liberty and justice for all. 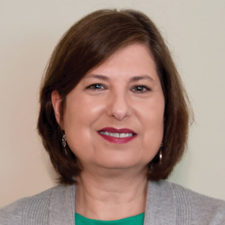 Raab Reibach’s stories about Gertie, the African American housekeeper she loved as a child growing up in the segregated South, have been published in the Richmond Times-Dispatch. She lives in Goochland and is the mother of two grown children.