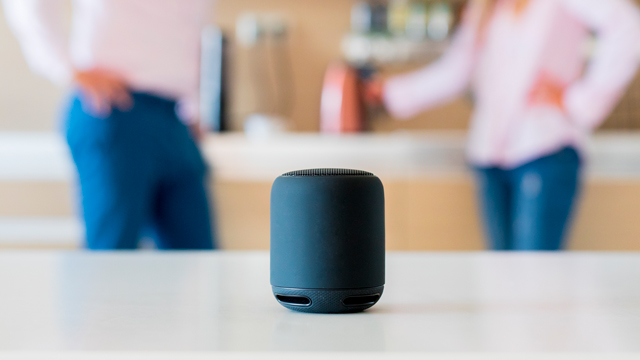 Imagine having a personal assistant follow you around the house adding items to your grocery lists, playing your favorite songs, and most importantly, turning off all the lights. Smart speakers like Amazon’s Echo, Apple’s HomePod, and Google’s Home can do all those things – and more. After nearly five years of having smart speakers in my house, I find that they have seamlessly integrated into my house, but I have had a few missteps regarding my family’s privacy along the way.

I ordered the Amazon Echo the first day it became available in 2014. I quickly set it up in the kitchen and started using features like the timer and shopping lists. My kids discovered that Echo could roll dice, share tongue twisters, or tell silly jokes. Within a year, I was using the Echo to control the television, lights, and thermostats in the house. By 2018, I had some version of an Echo in every room of the house including the bathrooms, and yes, you can purchase smart toilets that will flush on command.

When Google released its smart speaker, I quickly purchased two speakers believing that Google would bring a new set of features to the smart speaker world. Seeking an improvement, I ordered the Google Home Hub when it was released in the fall of 2018; it is a smart display and not just a smart speaker. The Home Hub has become indispensable in my kitchen because of its display, which I use often for finding and displaying recipes. My favorite feature is the ability to display Google Photos in a slide show (I synchronize all my phone camera photos to Google Photos). Each day, I see happy memories from yesterday displayed on the Home Hub.

When it comes to choosing smart speakers, start with what you want to do with them. If sound quality is important, consider Google or Alexa-integrated speakers from companies like Sonos or Bose. If you have an incredible sound system, consider skipping the smart speaker and purchasing an Echo Input that adds Alexa functionality to any sound system using a 3.5 mm audio cable or Bluetooth. Apple currently only has the HomePod, which has fantastic integration with Apple Music, but at $299, the HomePod is an expensive investment if you want to outfit your house. A low-cost alternative to purchasing smart speakers and displays is to repurpose old technology – like iPods, iPads, and Fires – to provide some of the same services.

When I first purchased a smart speaker, I knew that everything I asked it to do was going from my device to the Internet to a server somewhere and back to my device. I also had accepted the terms of use, which clearly stated what was being done with my data. I was okay with the app storing my commands because it gave me a giggle when I saw that my kids were streaming Queen or the Beatles. Had I read it more closely or checked the app associated with my Amazon devices, I would have realized that my devices were also recording random snippets of conversations I was having.

I recently discovered the following website: foundation.mozilla.org/en/privacynotincluded, which includes reviews on smart speakers and other smart devices. Each review includes a quick overview of the device’s privacy (sometimes called spying) features and a link to the device’s privacy policy. Take time to read about a smart speaker’s privacy settings. Most have options where you can turn off sharing your data with third-party advertisers. Tomsguide.com features tutorials on how to configure privacy settings for smart speakers. If privacy is a top concern, consider turning off the listening ability of the speaker (muting) and/or leaving the speaker on only when you need to use it.

To balance the convenience of a smart speaker with having younger children in the house and privacy concerns, I have modified a few settings. The most important one is that I have turned off the ability of my devices to record audio. I have limited access to explicit lyrics on Amazon Music and Google Music. I unplug devices in certain rooms except when I am streaming music from them. I continue to review the text commands to my devices to monitor what my kids are asking the speakers to do, and I verify that the devices are not over-listening. I also have added a personal information number (PIN) that is necessary for purchasing after what I call “the great Skylander fail” of 2014, when my son ordered nearly fifteen Skylanders using our original Echo.

Like any Internet-connected device, take the time to learn about the product before investing in it for your home or allowing your family to start using any smart speaker.

Shahwar Qureshi is the director of technology at The Steward School where she spends her days enhancing education through the use of technology. When she is not at work, she is searching for adventures of the unconnected variety with her husband and two children.