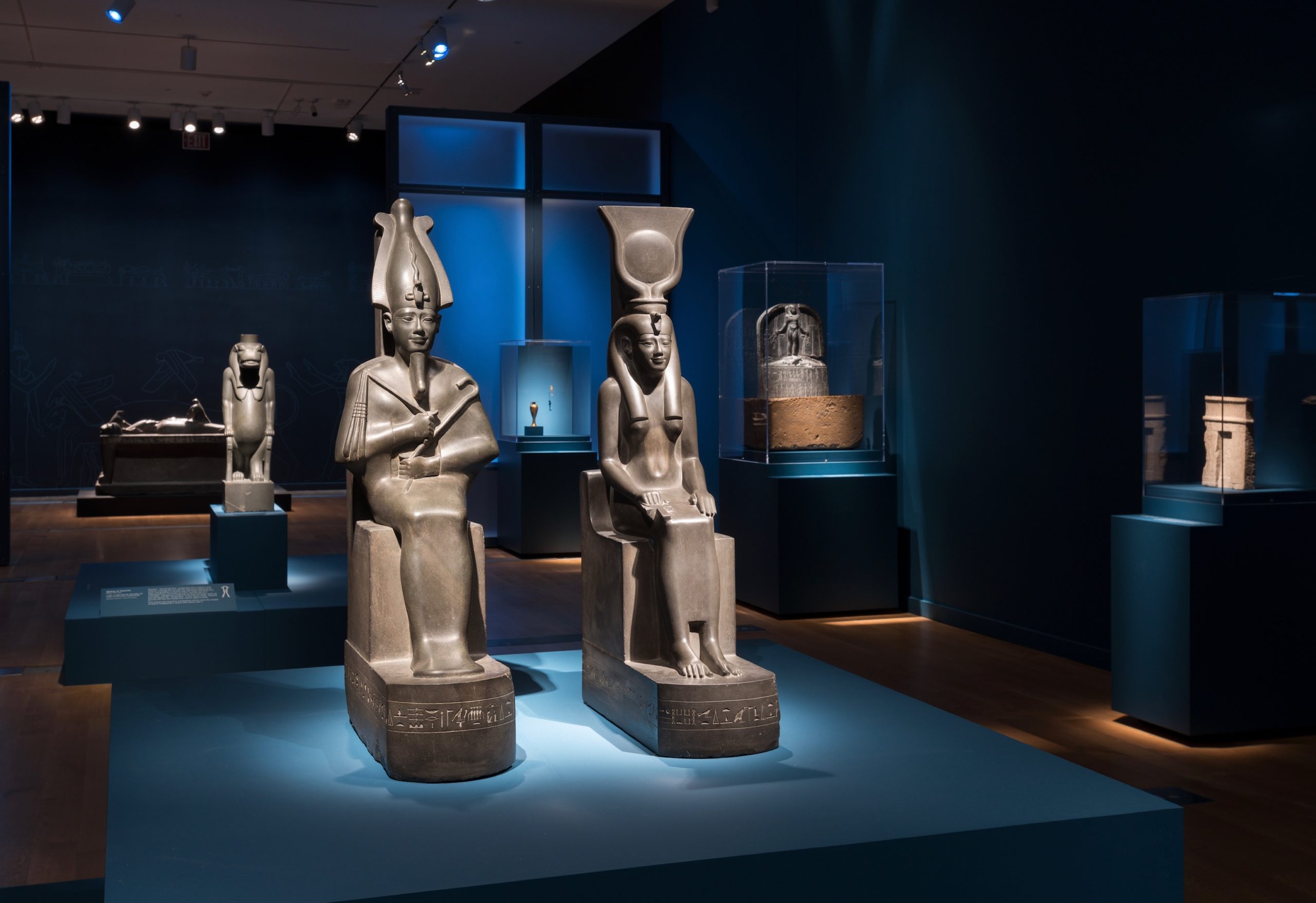 I have been to almost every special exhibit the Virginia Museum of Fine Arts has to offer in the past decade, traveling down those carpeted stairs to present my ticket and enter Napoleon’s court, imperial China, or the botanical world of Chihuly’s glass. This time, the journey truly transported me a quarter of the way around the world. 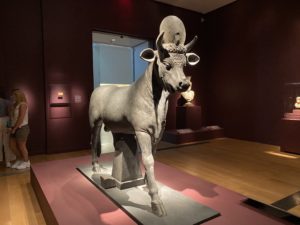 For Treasures of Ancient Egypt: Sunken Cities, the VMFA’s basement has been transformed into the underwater city of Thonis-Heracleion. It’s a city so mysterious that only within the last thirty years did archeologists realize the area was not home to the Egyptian city of Thonis or the Greek city of Heracleion, but the same city by two different names.

Devotees of Indiana Jones and Atlantis alike will find Sunken Cities enthralling and almost mystical. The exhibit, while technically exploring a civilization discussed in most third and eighth grade history classes in Virginia, combines mythology and archeology to give the impression of a world all its own. Though the stories of Cleopatra and Tutankhamun are interesting in their own right, Sunken Cities firmly places its focal point on a dual culture, not a single figure, which is refreshing.

Burgeoning historians in elementary school will find the exhibit design exciting (maybe even spooky, but in a good way) and the big-ticket items jaw-dropping. They will be familiar with the sarcophagi and statuettes of pharaohs. For a fun challenge, the towering steles provide an exciting opportunity to explore concepts of language and memorialization. If the hieroglyphs catch their eye, the museum shop has a machine to print your young scholar’s name in the ancient Egyptian script.

More advanced students in middle or high school, or even college, will enjoy exploring the creation and conflict that inevitably result from the confluence of two cultures. For example, the figure and symbology of a god named Serapis adorns busts, figurines, and housewares throughout the exhibit. An attentive guest would learn that Serapis was a tool invented by the founder of the Ptolemaic Dynasty, Ptolemy I, to foster a cultural connection between his Greek and Egyptian subjects. With an Egyptian-derived name and Greek-style aesthetics, Serapis served to bridge a cultural divide. The exhibit provides many examples of this phenomenon, and they’re worth exploring. 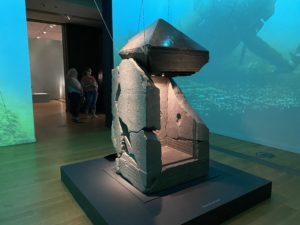 This exhibit stands out from other archeological exhibits because of its appropriate introduction to the team who did the decades of work it took to bring these findings to the surface, literally. As soon as the exhibit begins, a short and effective introductory video summarizes the excavation itself. We meet the team of professionals, led by archeologist Franck Goddio, charged with protecting and contextualizing the artifacts featured in the exhibit. Despite the opulence of the sarcophagi, coins, and jewelry, this introduction stood out as the crux of the exhibit.

There’s a reason the movie Titanic begins with the viewer meeting an archeological crew rooting around for evidence of Jack and Rose’s (entirely fictional) story. The connection the viewer has to the modern-day adventurers simultaneously establishes a connection to their findings. Learning about the Goddio team’s journey to find Thonis-Heracleion made me feel connected to its inhabitants from 2,500 or so years ago. To the humans who used the ladles, scuttled the boats, and prayed to the gods depicted in the adjoining rooms. The technique is powerful and, in this case, exceedingly effective.

Treasure of Ancient Egypt: Sunken Cities is a worthwhile archeological journey for the entire family. Whether your young scholar’s interest lies in archeology, history, mythology, or sociology, they won’t leave without learning about the vital connection between them all.

VMFA is the only East Coast venue and the last stop before the objects return to Egypt. The works of art on display include everything from jewelry and coins to utilitarian and ritual objects and from coffins and steles to the colossal statue of the fertility god Hapy, the largest discovered representation of an Egyptian god.

Treasures of Ancient Egypt: Sunken Cities offers a rare opportunity to experience firsthand the material culture of Ptolemaic Egypt, a golden age of human creativity in science as well as the visual and literary arts. Exciting film footage and photographs illustrate underwater expeditions and dramatic rediscoveries, as deep-sea divers solve a thousand-year-old mystery through archaeological research and innovation. Visitors will encounter these findings firsthand and witness a story that continues to unfold through ongoing excavations. Treasures of Ancient Egypt: Sunken Cities tells a riveting human saga of grandeur, complexity, wealth, and power, reminding us of the potentially devastating effects of natural disasters and the vulnerability of even the mightiest of human civilizations.