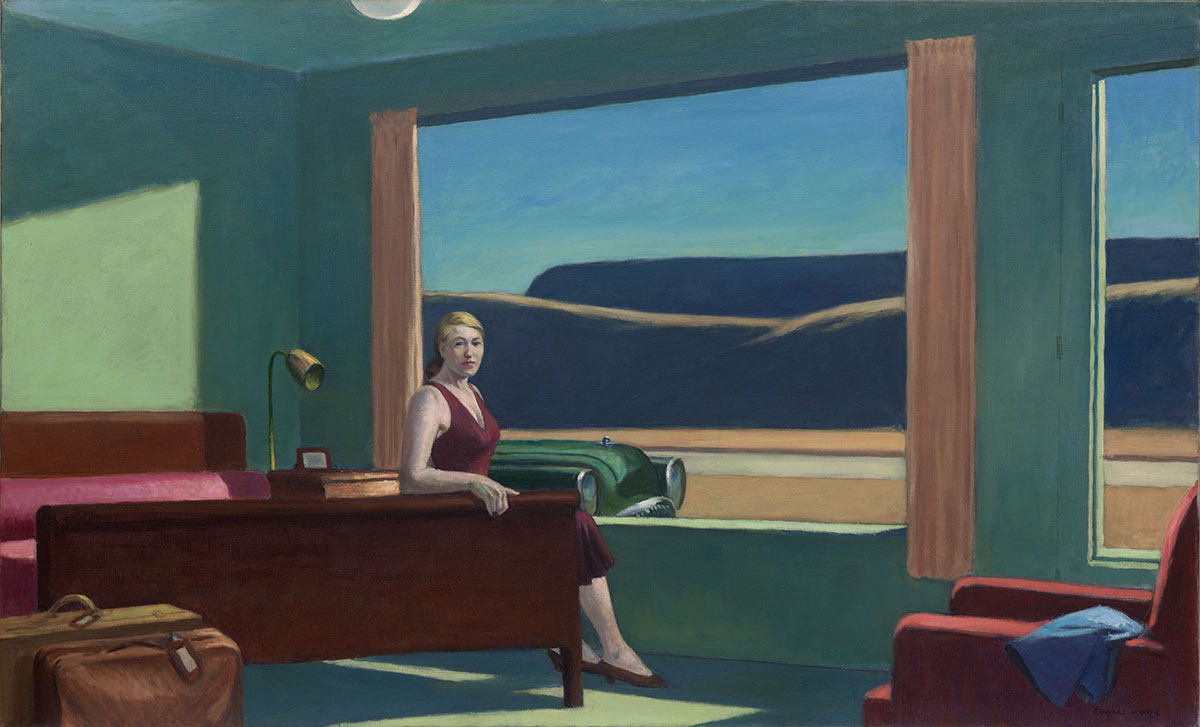 I was excited to see that VMFA was the first stop (and only East Coast venue) for an exhibition of one of the most celebrated American artists there is – Edward Hopper. As a fan since my college poster days, it was a real treat to see some of his works in person at the VMFA’s new exhibit, Edward Hopper and the American Hotel.

More than sixty of Hopper’s paintings, drawings, watercolors, and sketches are on display, along with rare personal items, such as maps and postcards from his travels and his wife Jo’s diaries, which were only recently made available to the public and provide meticulous details of their many road trips. Also in the exhibition are thirty-five works by other artists, including John Singer Sargent, David Hockney, Berenice Abbott, and others who explored similar themes.

I was fascinated to learn that Hopper’s early work included two stints as an illustrator for hotel trade magazines, which are on display near the beginning of the exhibition. These cover illustrations set the stage for Hopper’s continuing interest in travel and spaces of hospitality.

It was fun to follow the Hoppers’ routes using a unique interactive touchscreen map, which allow an exploration of the places the couple visited on three road trips from 1941 to 1953. You’ll even see that Hopper visited Richmond in 1953 and stayed at, where else – the Jefferson! The works have a voyeuristic appeal to them, affording us a glimpse into America’s cultural landscape in the early to mid-20th century.

Something I will remember forever that I’ve never seen before are two real-life replicas of the rooms from Hopper’s paintings, which are recreated adjacent to the paintings themselves (Hotel Lobby and Western Motel). You can even spend a night inside the painting – in the recreated room inspired by Western Motel – a first for VMFA.

The exhibition continues through February 23, 2020 and is free for VMFA members and children six and under. Ticket prices for non-members are: $16 Adults; $12 Seniors 65+; $10 Youth (7-17) & Students with ID. This might be a good time to look into a VMFA membership. For tickets and more information, go here.