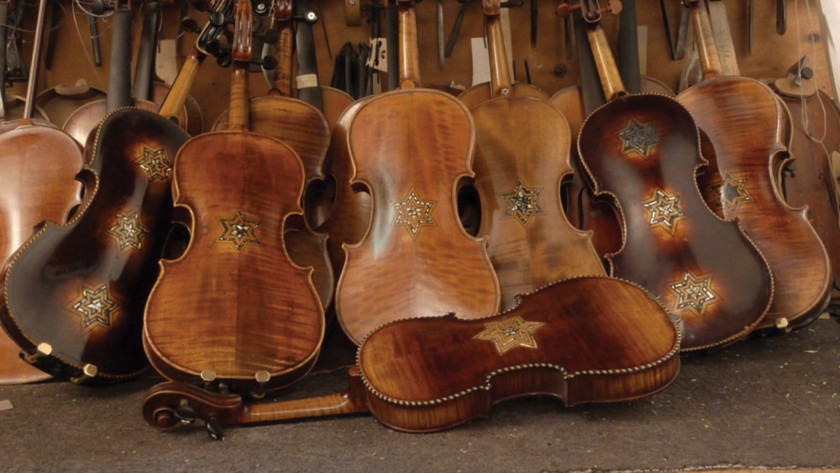 Violins of Hope, a touring exhibit that tells the remarkable stories of violins played by Jewish musicians during the Holocaust – will be in Richmond at three museums for twelve weeks from August 4 through October 24, 2021.

This marks the first time the exhibit has been to the Mid-Atlantic region. Other U.S. cities to host Violins of Hope have included Birmingham, Charlotte, Cleveland, Los Angeles, Nashville, and Phoenix.

The 60-plus violins coming to Richmond were recovered and restored by Amnon Weinstein, an Israeli violin shop owner and master craftsman. Four hundred family members of Weinstein died during the Holocaust.

“My father was determined to reclaim his lost heritage,” said his son, Avshalom “Avshi” Weinstein. “He started locating violins that were played by Jews in the camps and ghettos, painstakingly piecing them back together so they could be brought to life again on the concert stage and serve as a symbol of hope. Although most of the musicians who originally played the instruments were silenced by the Holocaust, their voices and spirits live on through the violins that my father has lovingly restored.”

Explore Social Justice and Talk About the Horrors of The Holocaust

A primary goal of Violins of Hope is to initiate deeper, more meaningful conversations about tolerance and social justice, along with educating people about  the Holocaust.

“If people understand more about the causes and consequences of the Holocaust, they will be less likely to join hate groups or support anti-Semitism in our society,” said Samuel Asher, executive director of the Virginia Holocaust Museum. “Through chamber concerts, educational programs and other activities that are planned during the 12 weeks of the exhibit, Violins of Hope Richmond will serve as a powerful instrument for learning about a time of great despair and the redemption that resulted from giving new life to these violins.”

In addition to hosting the exhibit’s first appearance in the Mid-Atlantic, Violins of Hope Richmond represents the first time that three museums have partnered with the local symphony to host the exhibit.

The Virginia Museum of History & Culture will feature seven violins. One survived through the horrors of Auschwitz and Dachau concentration camps. Some were cherished possessions that narrowly escaped Nazi Europe with their owners. Others continue to bear witness for musicians who were silenced. This display will also highlight stories in which Virginia and Virginians intersected with the Holocaust. In addition, the VMHC will also host a special Community Concert featuring some of the violins on Sunday, October 24. Andrew Talkov, senior director of Curatorial Affairs at the Virginia Museum of History & Culture, added, “Each violin has its own unique and inspiring story that is told in a deeply personal and emotional way. We are honored to be part of a project that transcends religion and sparks a meaningful dialogue that reminds us that, despite our differences, we all share a common desire to live with dignity.”

The Black History Museum & Cultural Center of Virginia is planning to highlight the role of jazz music in Virginia using Violins of Hope instruments. “Music has had a powerful influence on individuals as well as national movements,” said Dr. Monroe Harris, Board President of the Black History Museum & Cultural Center of Virginia. “It provides a connection that can have a profound impact on understanding ourselves and others. We look at the Violins of Hope as another opportunity to bring our communities together to learn, listen and share an experience.”

For information about Violins of Hope Richmond, all the related events, concerts and educational programs, including a downloadable Teacher’s Guide, visit violinsofhoperva.com.