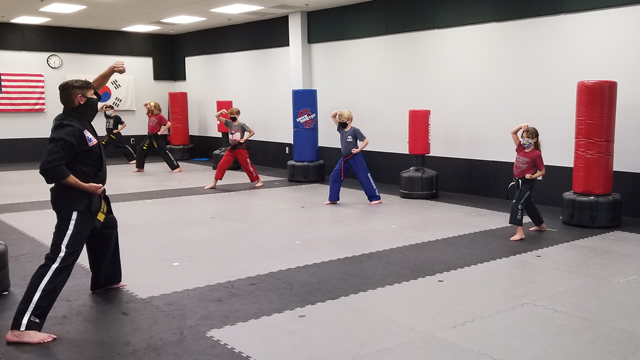 The Benefits of Martial Arts for Families

Twice a week, our daughter dons her white gi – the classic loose-fitting pants and jacket – and heads to taekwondo class to practice her kicking, breaking, and form as she works toward her third-degree black belt. That’s right. She’s thirteen and has two black belts, well, under her belt. She’s been studying taekwondo for six years now, thanks to a friend who suggested she check it out. Since then, her father and I have encouraged her to stick with it, as we feel taekwondo is good for her discipline, focus, strength, and confidence, and, of course, it’s a great form of self-defense. These are the reasons why many Richmond families choose martial arts for their kids.

Hedi Cho’s 10-year-old Cooper has been participating in martial arts at Taekwondo America of Richmond since 2015. The Short Pump mom decided to enroll her son in taekwondo to help tame his hyperactivity and boost his attention span.

“We thought we would try it out for a few months to see if he enjoyed it, but we never saw it lasting more than five years,” Cho says. “It has been great for his development, both physically and mentally.”

Cho has noticed her son mature in many ways since starting taekwondo. She notes that studying martial arts has helped with his focus, memorization skills, persistence, and confidence. Cooper attends classes regularly and has achieved black belt status. His mom hopes that now that he is a black belt student, he will hone his leadership skills as well.

“I love how martial arts teaches Cooper so much discipline and gives him something that he can feel proud about,” Cho says. “I also love how taekwondo helps him know everything doesn’t come easily. He really has to work hard to earn each of his belts. There have been times when he hasn’t passed testing, and that has helped him increase his drive to work harder to eventually reach his goals.”

Discipline and focus are the main reasons some parents choose martial arts for their children. Martial arts can be especially beneficial for children who struggle with conditions such as attention deficit hyperactivity disorder. During training, students must pay close attention to their workout partner or instructor so they don’t get hit themselves or punch or kick their partners. Students are also busy concentrating on their own stance and techniques.

Martial arts programs have become popular for boys and girls for both the physical and mental aspects. Physical benefits include increased cardiovascular health, flexibility, agility, balance, and strength. And the emotional benefits of studying martial arts – like concentration and confidence – are a big perk for kids who might not be interested in traditional recreational opportunities.

“Unlike team sports where only the really talented kids get to play, martial arts allow everyone a place to learn, thrive, and succeed,” says Sonja Scott, co-owner and program director of Taekwondo America of Richmond.
“The truth is not all kids are cut out for team sports, but martial arts offer a chance for students to grow at their own pace and thrive in an environment where really their only competitor is themselves.”

And there’s another reason martial arts are becoming more attractive. As the COVID-19 pandemic drags on, more parents may be opting for alternative activities that allow for effective social distancing. Martial arts like taekwondo or karate can easily provide for individual training in smaller class settings or on virtual formats such as Zoom.

There are private dojos (the name of the room or facility where martial arts are practiced) in Richmond where students can train or they can take classes at the YMCA. At the YMCA, children can enroll in a 3-month program to see if taekwondo is a good fit for them. Students can train at the YMCA from their first belt, a white belt, through their blue belt before moving on to a private dojo. The YMCA has classes in taekwondo for kids starting at age six.

“Taekwondo is not just a class,” says Master Tommy Call, a fifth-degree black belt instructor who has taught at the YMCA for more than ten years. “It applies principles to life. Each step you go through leads to another one, starting at learning respect, then transitioning to discipline, confidence, honesty, humility, patience, diligence, sincerity, positive attitude, and self-control.”

There are many variations of martial arts, which can be divided into two groups: one focusing on striking and grappling (or wrestling), and the other geared more toward self-defense. Karate, a Japanese martial art that uses hands and feet to deliver blows, is one of the more commonly known, but there are many other martial art forms. Taekwondo, which is what most young children start out learning, is a Korean martial art similar to karate that was first developed in the 1940s. Its emphasis is on various kicking techniques and striking. Other martial arts include Muay Thai, or Thai boxing, which is the national sport of Thailand and uses fists, elbows, and knees; jiu jitsu, another Japanese martial art that relies on choke holds and joint locks; and krav maga, which focuses more on self-defense skills using elbows and knees.

Geremi Tan’s son, Levi, started with a junior martial arts program involving Muay Thai and jiu jitsu two years ago when he was four. Her son practices at UFC Gym Richmond, where Tan’s husband is an instructor.

“We value discipline tremendously,” says Tan, who lives in the West End. “The physical aspect is secondary. I love the program because of the values that are taught along with it. Martial arts are not only about learning to fight, but to help build and round character and development.”

While kids can start studying at any age, Scott recommends beginning around the ages of seven or eight, which is usually when children are mature enough to participate and handle a class.

Taekwondo America of Richmond, however, along with other area dojos, offers classes for preschoolers, where the attention is more on learning how to listen and follow instructions. Preschoolers also partake in a variety of games and drills that help them develop their large and fine motor skills, balance, and coordination.

“Our program is individually based, which means although we may have certain requirements for each belt rank, we also take each student’s abilities and work to make sure they are improving as best they can,” says Scott, who has a third-degree black belt and has been practicing taekwondo for more than two decades. “Many students who choose martial arts do so because they are shy and insecure. Our class structure allows them the chance to develop their confidence, make friends, and fail and succeed together.”

Meanwhile, at Richmond Traditional Martial Arts, kids start out with taekwondo and then transition to other martial art forms when they turn thirteen, depending on their maturity and training. Tashi Meg Richardson, the director of the children’s program, has more than twenty-six years’ experience with martial arts, eighteen of them with Richmond Traditional Martial Arts. Two of her children went through the program.

“It is the greatest thing that I could have ever done for my boys,” Richardson says. “One of my sons doesn’t know where he would be without martial arts.” She says martial arts instilled confidence in her kids and gave them the tools to deal with bullies and handle any situation. “Martial arts also translate to the classroom as you learn to work hard,” Richardson adds. “It is difficult to hold a form or practice a stance for a long time. Kids learn that hard work does pay off.”

So how do parents know which dojo is right? Scott recommends matching a martial arts facility to a child’s personality, as well as how well your child responds to discipline and the instructors. Visit a few different dojos to get a feel for the operations.

“Another big thing is how well the instructors respond to the students,” Scott says. “Do they make the kids stand still the majority of the time waiting their turn, or do they keep them engaged and active? If your child has ADHD or other learning issues, do the instructors know how to work with them and how to get them to participate to the best of their ability?”

One sure way to find out is for parents to take a class themselves. Families may want to choose a facility where parents can train and learn beside their little ones. After all, “Martial arts is an on-going, lifelong activity,” Richardson says.

Jennifer Cooper feels that way about martial arts. That’s why all four of her children, who range in age from ten to twenty-one, have participated in martial arts programs.

“I have seen the benefits of martial arts from all ages,” Cooper says. “First, it gave my children a foundation to stay fit as they grew older. It also gave them a sense of pride when they would work hard to learn a new skill or form. I also saw the confidence in each of my children.”

Cooper’s 21-year-old daughter, Grace, found her taekwondo background useful while she attended Virginia Tech. While some of her friends and roommates may not have been able to handle uncomfortable or potentially dangerous situations on their own, Grace felt confident enough to handle anything that came her way.

“Taekwondo gave me a foundation to rely on my abilities and trust myself,” she says. “I felt safer knowing I did not have to necessarily rely on other people around me.”

Cooper’s eldest son, who is in the military, not only gained confidence, discipline, and physical ability through taekwondo, but he also found an outlet for his pent-up energy as a child. Cooper’s two youngest children still practice taekwondo and, these days, “I also like the fact that I can get my middle school boy to do more than just play video games,” she says.

This focus on non-screen activities is exactly what most families want since many children are staring at screens much of the day, in part due to virtual learning as a result of the pandemic. Add to that the challenges of engaging in team sports and contact sports during a pandemic, and it becomes clear that martial arts can be a safer alternative to help kids stay physically and mentally well.

“We know that exercise helps calm the body, relieves stress and tension, and creates a sense of peace in mind,” Scott says. “Now more than ever, children, teens, and adults need to be able to escape, even if it is for a short period of time, whether it’s virtually or in person.”