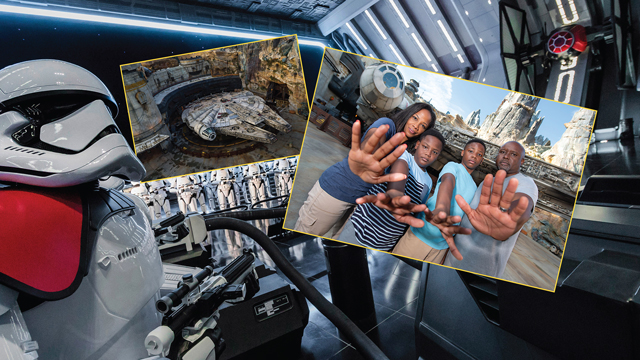 May the Force Be With Your Family 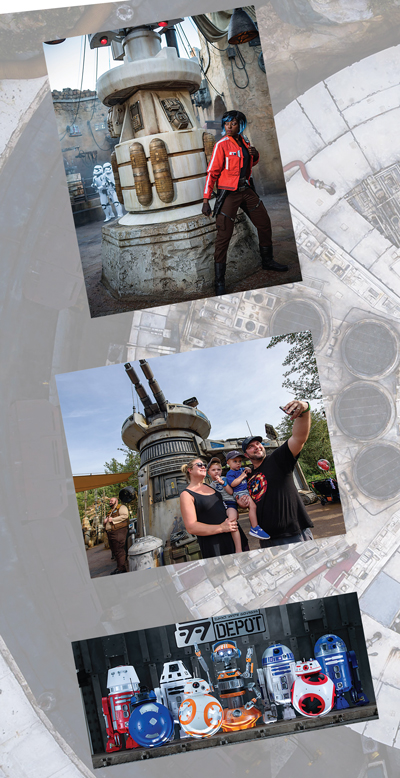 Resistance! Ignite the spark! Light the fire! Those are the orders for fighting the First Order that kicked off my family’s journey into Star Wars: Galaxy’s Edge at Disney’s Hollywood Studios. Okay, so I admit I haven’t seen all the Star Wars films, but I do have a special place in my heart for the original Star Wars movie released in 1977, so I was excited to see how Walt Disney World would bring these galactic adventures to life.

We landed in Disney World in December just in time for the opening of the park’s newest and most inventive ride, Star Wars: Rise of the Resistance.

Star Wars: Galaxy’s Edge opened in August and is the largest single-themed land expansion in Disney history. The 14-acre land is the “most ambitious, immersive, advanced, action-packed attraction Disney has ever created,” says Bob Chapek, chairman of Disney Parks, Experiences and Products.

The new land was named on TIME’s list of World’s Greatest Places 2019 and has already earned several awards from various theme park associations.

Imagineer Chad Stachnik, principal project manager for Walt Disney Imagineering, has been working on Galaxy’s Edge for about five years. “We wanted to create a place to bring all of the [Star Wars] movies to life… take it from the screen to the ground,” he says. “This is new to the Star Wars storyline and includes many different stories.”

Stachnik grew up watching the Star Wars films. Walking up to the Millennium Falcon and seeing it at a life-size scale is “so different than seeing it in the movies,” he says. “I really wanted to be part of this [project] without a doubt.”

Star Wars: Galaxy’s Edge blurs the line between fantasy and reality in expert fashion. And that was the intent of the Imagineers who worked closely with Lucasfilm to develop key design elements that mimicked the style and tone of the production designs from the hugely popular films.

To ensure authenticity, they visited active Star Wars film sets in the United Kingdom to study everything from ships to costumes to props. They also visited George Lucas’ private archives in California to study original concept artwork created by artist Ralph McQuarrie. Whenever possible, the Disney design team referred to pre-1980 materials to capture the look and feel of the props in the first Star Wars films.

Arriving at the Outpost 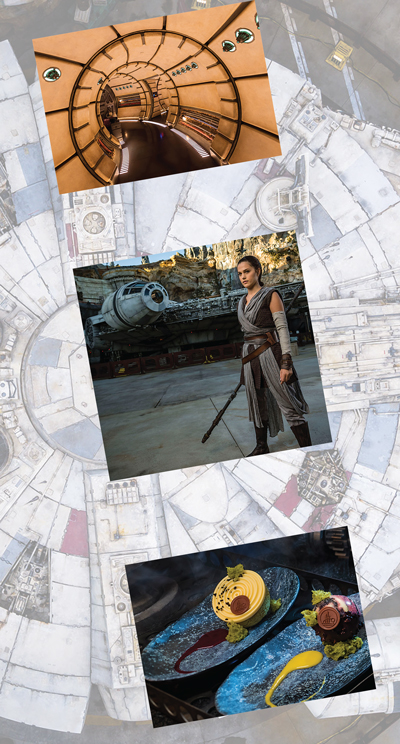 When we set foot on the Batuu in Star Wars: Galaxy’s Edge, we immediately felt like we were stepping into a different time and place that was unlike anything we had seen at Disney. The inhabitants of this uncharted region – think aliens and droids and other unworldly-looking beings – are roaming around completely in character.

During our time at Black Spire Outpost, we ran into the towering Chewbacca – I think I come up to his knee – and the Supreme Leader Kylo Ren and his Stormtroopers. Don’t even think you’ll get a photo with a Stormtrooper. Believe me, I tried. They are on a mission to find members of the Resistance and don’t want to be bothered with selfies – or any other unworthy form of technology.

If you’ve ever wanted to charge through the halls of a Star Destroyer or blast across the stars inside the Millennium Falcon, this is your chance to do just that by way of the land’s two ride adventures: Millennium Falcon: Smugglers Run and Star Wars: Rise of the Resistance.

Millennium Falcon: Smugglers Run opened in August at the park. My daughter Angela’s fiancé Andy endured long lines to experience this ride firsthand. The ride follows the events of Star Wars: The Last Jedi where Chewbacca brings the Falcon to Black Spire Outpost for repairs. He loans the Falcon to Hondo Ohnaka, a smuggler who is making good use of the ship. When you meet Hondo, in hologram form, he says he has more cargo than he can handle and needs extra flight crew – this is you, folks! – to make some runs for him.

Interactive in the purest fashion, the ride gives you the chance to climb into the cockpit and take the controls of the Falcon. Each person has a role in the mission. You can be a pilot, gunner, or engineer. And, if you don’t handle the Falcon correctly, you could crash and burn. Talk about feeling the pressure!

The ride is authentic in every detail of the Millennium Falcon, down to the switches and stickers on the exterior hull. It marks the first time a full-size, 100 percent complete Millennium Falcon has ever been built. And, it’s pretty impressive.

And while Millennium Falcon: Smugglers Run is amazing and fun to maneuver, Star Wars: Rise of the Resistance takes interactive play to another dimension. The story brings you into the middle of a climactic battle between the First Order and the Resistance that includes a face-off with Kylo Ren. When you first enter your journey – and it is more of a journey than a ride – you board a full-size transport shuttle and then a Star Destroyer.

The ride is one of the most immersive, ambitious, and technologically advanced experiences in Disney history, using multiple ride systems that work together to create a seamless story. “You step from one to another that takes you further into the story,” says Stachnik, adding that recruits (that’s you!) are captured and eventually manage to escape during the adventure.

While we were visiting Star Wars: Galaxy’s Edge, we had the opportunity to try the land’s proprietary blue or green milk (sorry, but we passed!). However, we did try some of the out-of-this-world delicacies at Ronto Roasters that included a Ronto wrap, a barbecue-inspired dish with roasted pork, grilled pork sausage, peppercorn sauce, and tangy slaw.

The open-air market in the land is where you’ll find a collection of shops and stalls with everything Star Wars. If you want to build your own droid, head to the Droid Depot where you can pick pieces off a conveyor belt and build either the R-Series or BB-Series droid that interacts with certain elements in the land.

One of my favorite spots was Savi’s Workshop – Handbuilt Lightsabers, where you can make and customize your own lightsaber. Talk about feeling the force. I had no clue that the handles to these lightsabers were so heavy and well-crafted. Of course, I’d never held a lightsaber before, so it was all new to me.

I was told there are more than 120,000 possible combinations for constructing a lightsaber using the pieces in the workshop. Even this shopping experience was eye-opening and loads of fun.

We had an amazing time in the newest land in Disney’s Hollywood Studios, even though I never got that selfie with the Stormtroopers. Oh well, maybe next trip! In the meantime, you can immerse yourself in the world of Star Wars by seeing the newest movie, Star Wars: The Rise of Skywalker, which opened in December. The third installment of the Star Wars sequel trilogy – following The Force Awakens (2015) and The Last Jedi (2017), this movie is the final episode of the 9-part Skywalker saga. You can also catch up with the timeless adventures on the streaming service, Disney Plus. And if you’re looking for more information about family adventures at Disney World’s Star Wars: Galaxy’s Edge, visit RFMonline.com and check out Just Joan: RVA Storyteller.