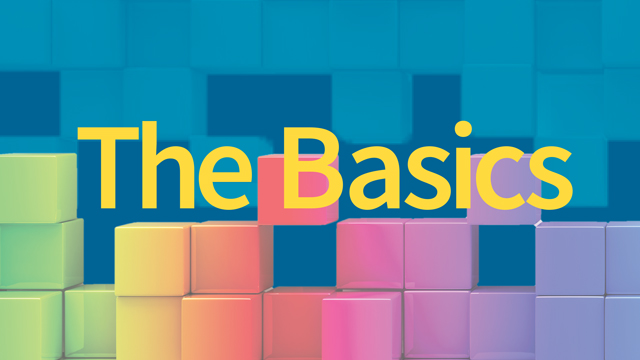 As she was leaving her house, Shakima Broaddus noticed the residual raindrops on her car from the day before. Her three-year-old son Barry saw the same droplets and questioned why the car was wet.

She asked him if he remembered what it was doing yesterday and he replied, “Raining, Mom.”

Each day no matter the weather, Broaddus uses the concept of The Basics to help her son learn about the world around him. The Basics are five simple and powerful principles that parents, caregivers, and childcare providers can put into action to help children thrive and develop in the early years of life.

Broaddus learned about The Basics through her son’s childcare center where the concepts are used and reinforced daily.

“I didn’t realize I was doing it until I looked at The Basics. We use it a lot,” Broaddus says. “I like the fact that I am doing it and his preschool is reinforcing it. Barry now knows a lot for his age.”

The Basics provide a framework and easy-to-use strategies for interacting with young children in fun and meaningful ways. These five evidence-based parenting and care-giving principles can benefit children from all backgrounds and across the spectrum of socio-economic factors:

First identified and launched in Boston by Ron Ferguson, PhD, The Basics, Inc. grew out of the Achievement Gap Initiative (AGI) at Harvard University in partnership with the Black Philanthropy Fund.

“I noticed in the national data that the gaps we worry about during school years are already in evidence when kids are two years old,” says Ferguson, who serves as faculty for the AGI at Harvard. “Some of the science suggests we can detect gaps by six to seven months old.”

Ferguson’s research has focused on achievement gaps in elementary and secondary schools. “If there are gaps there at the age of two, we can’t wait until school,” he says. “Research shows that those gaps are related to early childhood experiences.”

The Basics are the things many parents already do “but don’t know that it’s important to be strategic in doing them,” Ferguson says. “It matters that you do them; make them part of your routine.”

Bringing The Basics to RVA Families

The concept of The Basics was introduced to the Richmond area by Amy Bartilotti, coordinator of the Office of Family and Community Engagement at Chesterfield County Public Schools, who heard Ferguson speak at a conference in 2017.

Since then, a variety of Richmond-area organizations have partnered with The Basics to engage with parents, childcare providers, and the community to provide reinforcement of the five principles of interacting with young kids.

“When The Basics came along, we were excited about the fact that it was broadening out and looking at a child’s experiences in the early years in a more holistic way. It focuses on loving experiences and play,” he says. “It’s been a nice framework to help us continue conversations with families as to what they can do to meet the early skills that kids need.”

The library began including information about The Basics during its story times. “We want to share messages with parents about things they could do to make their kids school-ready,” he says. “We started developing book lists based around The Basics. More recently, we started doing a blog series on our library website about The Basics.”

He finds that families like the messaging behind the program. “It’s just another venue where people are hearing this stuff. Hopefully, they are also hearing it from others,” says Samuelson, who is the father of three boys. “We do outreach, and I would like to try to weave it in with our outreach efforts.”

Pediatricians are another avenue of dispensing information about The Basics. Bergen Nelson, MD, at Children’s Hospital of Richmond at VCU, tries to incorporate The Basics into the hospital’s primary care pediatric practice.

“We know babies’ brains are developing so rapidly. About 80 percent of your lifelong brain development happens in the first three years of life. As [babies and children] develop, they are shaped by everyday interactions with parents or caregivers,” she says.

The information contained in The Basics breaks each category down in simple terms, making it more understandable.

“We participate in the literacy program Reach Out and Read. We provide age-appropriate books for children birth to five in well-care [visits], as well as The Basics materials. In the newborn nursery, we give parents a notebook with The Basics,” Dr. Nelson says.

Messages are reinforced through CHoR’s community outreach programs. “We want to help provide parents with reminders that these daily interactions are really powerful,” Dr. Nelson says.

Even though the messages are simple and may come naturally to some parents, they can be easily forgotten when the pressures of daily life become overwhelming. Parents may push off the interactions they are having with their children for other endeavors.

Dr. Nelson believes parents should start practicing The Basics every day from day one. Consciously make an effort and establish the habits early for best results; then the behaviors will come naturally for adults who are interacting with little ones.

“Babies are learning and taking everything in. Interactions can affect their brain development. It’s important for parents to realize they are their child’s best teacher. There is no substitute for face-to-face interaction, there is nothing as effective,” she says.

Krista Dawson, director of education at the Children’s Museum of Richmond, became intrigued with The Basics when she first heard Ferguson speak at an event in Richmond. “We believe in learning through play,” she says. “This is something we could get behind.”

The museum has incorporated The Basics into the artwork in its Little Farm area, which is designed for infants to age three and their caregivers. “We also put up some signage that we change out that gives guidance on how to play and use The Basics intentionally every day,” says Dawson, adding that museum playgroups are also built around The Basics in an effort to help caregivers learn the strategies.

Parents Are Learning, Too!

The messages in The Basics have also inspired parents in their “own personal development,” Ferguson says. “The better a parent is at managing stress, the more emotionally available that parent can be for their child.”

First lady Pam Northam says that when she and Governor Ralph Northam became parents, “we were very humbled in learning the true reality of living with children.”

During her tenure as first lady, Northam has been committed to early childhood education. A former pediatric occupational therapist and science educator, Northam fell in love with education and teaching. As a teacher and a mother, she wanted to help spark the love of learning in young children. “We know in the first few critical years of life more that one million neural connections form every second,” she says, noting that establishing those connections in the early years is crucial. “We know that parents are a child’s best teacher.”

One of Northam’s favorite principles of The Basics is count, group, and compare because it is “the basis for computer science,” she says.

Every family walk, for example, is an opportunity for a count, group, and compare activity. “Growing up in Hampton Roads, we loved collecting shells, flowers, and pine cones. These simple activities are the building blocks of STEM (science, technology, engineering, and math),” she says.

An outdoor excursion with your child can be a learning adventure. Parents can ask their child to tell them how many petals are on a flower or how many legs are on an insect. When her son and daughter were little, she encouraged them to do LEGOs and robotics.

“Children are natural scientists,” she says. “Every child sees things, and that reminds us as adults of the beauty around us.”

The first lady says cooking is another opportunity to interact with young children. “Put them on a stool next to the counter and have them cook with you,” Northam says, adding you want to continue to ask questions while you are cooking. “This is an entryway to STEM and language simulation. The great result at the end is that you can eat it all up.”

The principle of maximizing love through activities such as reading bedtime stories (the first Basic), is beneficial to both the parent and the child.

“We read to our children before going to bed. Sometimes the kids would fight over who would read,” she says. “They loved that time of being held close. Consistency leads to security.”

Children build skills in early childhood that will eventually help them thrive. A more conscious effort by adults to put The Basics into practice will help all children as they grow and learn and become successful adults.

As they were growing up, Northam’s son used to love taking things apart while her daughter dove into artistic endeavors. Northam would look for opportunities such as a visit to a museum or the library to help foster their fledgling talents. “I believe every child should have the tools they need to succeed. There is no better investment than in our children,” she says. “Building community to support every child is so important. We can’t do it alone.”

Using All the Tools

Parents interested in learning more about The Basics can link to important resources online. RVAbasics.org features free, downloadable tip sheets with a list of suggested activities for each of the five principles of The Basics, along with other resources designed for specific audiences such as parents and caregivers, educators, healthcare providers, faith-based organizations, and community members.

Basic Insights is a free text messaging program designed to support a child’s development and strengthen the parent/child relationship. Each week until your child turns three, families receive two messages based on a child’s age. Monday’s message includes a science-based fact and Wednesday’s message is a suggested activity to boost a child’s brain development and learning. The messages serve as reminders, as well as sources of new ideas for connecting with your little one.

Signing up is fast and easy. Visit smartbeginningsrva.org, choose English or Spanish, and then click the link or scan the QR Code.

The Basics has a “serve and return dynamic,” says Ferguson using a tennis metaphor. “You want to keep the volley going as long as you can. These experiences are ways to give a child experiences that foster conversation, learning, and fascination and don’t cost money or rely on toys.”