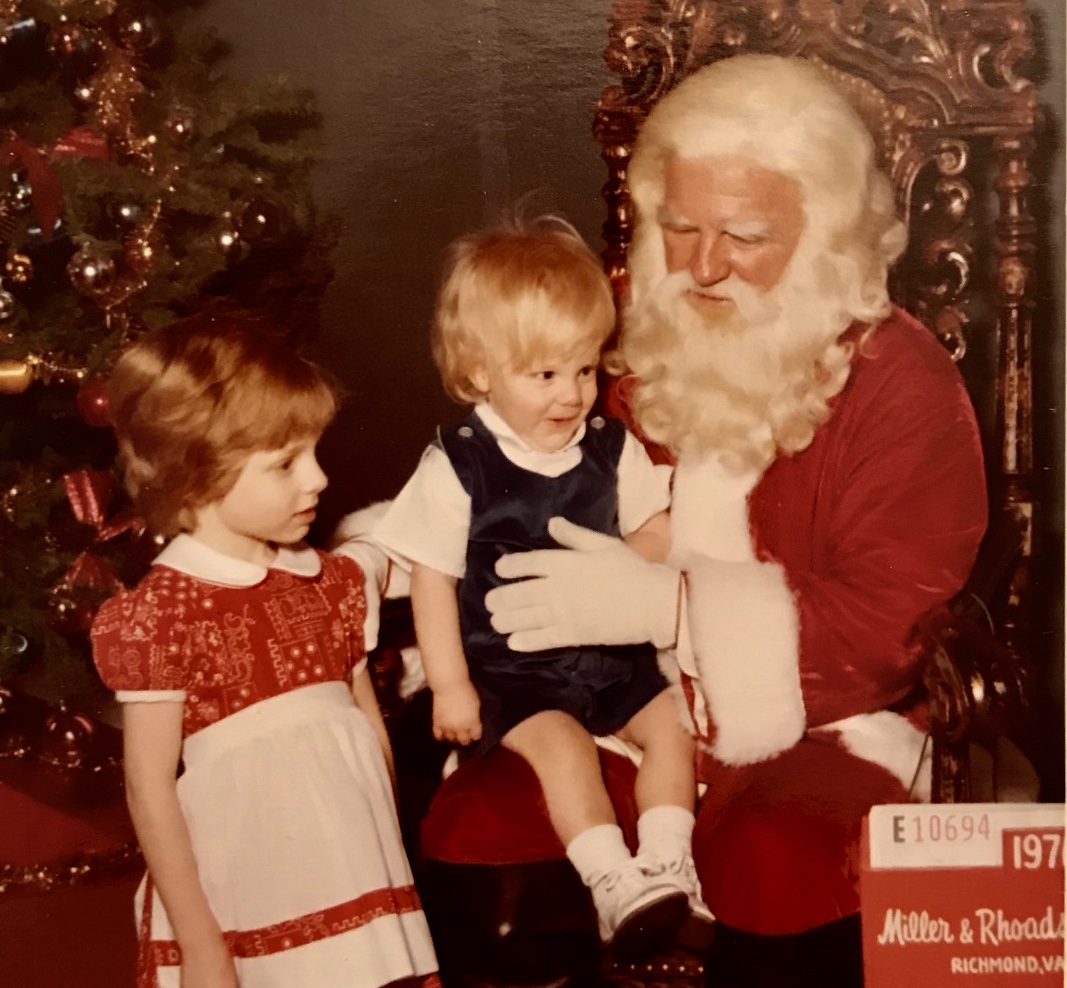 On a special December Saturday in 1983, Dad woke up early to warm up the Toyota. By seven o’clock, my sister Susan and I were inside the car. Then, we waited for Mom, who perpetually ran late. We needed to start just at dawn because we were going to see the real Santa at Miller & Rhoads. Back then Dad was our shuttle. He avoided the line and the outing altogether by dropping us off and picking us up later. It was a smart move.

On the way up Broad Street, Mom reminded us that she, too, had once made the same trip, but she had been coming from Chase City. For her, Richmond was the big time. Her town had one stoplight, one cemetery, and one swimming pool. Susan and I sat in the back and reviewed our lists. The rule was you got to ask for three things. Somehow a third choice of “surprises” was allowed even though it broke the rule. Stuffed inside our Sunday best, which for me meant light blue dress overalls and a white shirt with a Peter Pan collar, we looked polished and ready for hymns. Dad pulled up to the main entrance of the department store, right next to the mannequinned windows with snow scenes from around the world. He threw the car in park, and it was Christmas.

The familiar ding-ding-ding welcomed us to M&R as we caught those first whiffs of Christian Dior and Jovan Musk. We rode the escalator up to the seventh floor, past Isotoner gloves and pre-wrapped Mr. Coffee displays. There was already a line, so we needed to hustle.

In the holding area with velvet ropes, kids screamed and babies cried. It was beautiful. I didn’t even have my Casio watch yet to count the minutes. Instead, we looked at the stars on the ceiling and the animatronic elves. Occasionally, I’d ask the kid next to me what he wanted. No matter what he said, if it wasn’t one of my three things, it sounded like a dumb or impossible request. You’ll never get that, kid.

The Snow Queen looked like the Good Witch in The Wizard of Oz. Talking to her meant we were close. When Santa called us over, he knew our names. Hello John and Susan. I sat on his lap. Susan stood by his knee like a soldier. We smiled for the photograph that showed up three weeks later and cost extra. It was an orderly affair. Waiting in that magical room was as grand as actually chatting up Santa. Afterwards, when we went to the Tea Room for cookies and milk with Mr. Kringle himself, Eddie Weaver serenaded us on his Hammond. By two that afternoon, Dad was back outside in the Toyota. Those seven hours etched Christmas on the brain.

Now that Miller & Rhoads is long gone, my wife Dawn and I have started our own tradition. Instead of forcing our sons to wash their hair, we employ a 7-11 type code: no shoes, no shirt, no Santa. Then, we hop on I-95 and head to Bass Pro Shops.

Parking is easy. If you arrive late, you might be stuck at the end of the lot, but we try and go on a weeknight to ensure a front row space. On the walk into Winterland, Atticus and Levon see what Santa has been working on: some Jon boats and several small pontoons. Glossy hulls with stenciled names like “Nitro Z21” remind us that Christmas has returned.

Instead of walking past racks of Gant dress shirts and riding up the escalator toward pyramid towers of Black & Decker SpaceMaker toaster ovens, we pass vintage fishing tackle, deer horns, and wooden snowshoes. There are no elves. A sales clerk named Joey clicks us in. We walk through the turnstile into the camouflaged amusement park. The boys run off, knocking into Carhartt waders and blaze orange pajamas. There’s a real stuffed bear and mooseheads. The boys ask to buy some buffalo jerky before sprinting toward the 4-wheelers.

Then – a Christmas miracle! There is no line. It’s called the Bass Pass and you get yours near Santaland. Instead of staring at the backs of everyone else and counting floor tiles, the boys can shoot laser guns at LED targets, take turns blasting Nerf arrows, and drive remote-controlled Jeeps over a rocky course. They captain the in-store fishing boats and tap on the glass of the 23,000-gallon aquarium, trying to spot Virginia’s largest catfish. They ride the elevator upstairs to handle geese decoys and take turns mouthing a turkey call. I walk behind them, adding my warnings and confirmations. “Don’t touch that arrow blade.” “Maybe we do need a remote-controlled deer feeder…?” It isn’t Christmas until we look for sticks of face-paint and play with the bear traps.

With a little time to kill before our Bass Pass appointment with Santa, we keep exploring. Raccoon lure, bow-fishing reels, and fleece-lined flannel help us forget that we are waiting. Time moves quickly when there are folding shovels and fireproof gloves to purchase.

When our reserved time slot arrives, the boys’ motors are running at a steady 2000 RPM. We’ve burned off the steam, and they can give Santa their full attention. When we turn in our reservation card, we wait two minutes (I timed it!), and then, Santa is all ours. The photo is free and printed on the spot. They toss in a frame, too. We pocket our candy canes and walk over to Islamorada Fish Company. As part of our visit with Santa, the boys’ meal is free. There’s no organ music, just a little Darius Rucker, a burger, and a beverage.

Dawn and I stare at the framed photo. In it, we see how Levon broke our rule. He’s missing a shoe. Atticus looks like he is napping.