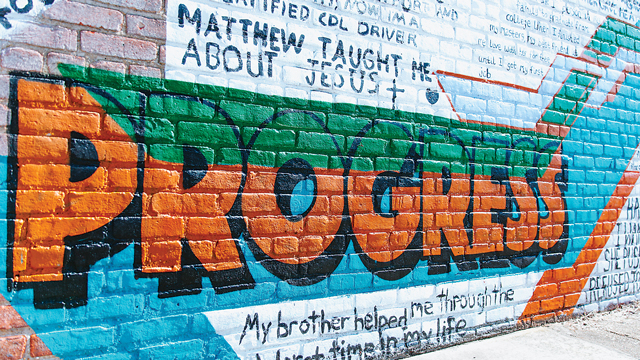 Where Needs are Met, Humans are Helped, and Community is Found

Michael can tailor any garment you bring him, handling every inseam and hem with precision and care. His dream of owning his own business had come to fruition after years of honing his craft and building a clientele. Then came COVID-19, and business evaporated nearly overnight. Since April, revenue has been reduced to a trickle, while the bills continue to arrive with frustrating consistency.

While Michael stares at an unforgiving spreadsheet, Wadiah and Naadir eye a countdown clock. Naadir is pregnant. The couple arrived in Richmond from Afghanistan through the Special Immigrant Visa program because of their work with the U.S. military’s rebuilding efforts in their native land. For this hopeful couple, arrival in Richmond during a pandemic has made the already daunting job search even harder. With only weeks to go before they welcome their newborn, the couple worry how they’ll afford even the basics for their family.

Michael and Wadiah and Naadir represent the more than 1.3 million households in Virginia who, according to this summer’s ALICE report from United Way, were one emergency away from financial collapse – before COVID-19. That number has increased dramatically with the pandemic’s historic erasure of jobs. Most of these individuals and families have been perpetually blocked from financial thriving, unable to establish savings due to inadequate wages, inconsistent job hours and schedules, and more.

In the city of Richmond, almost 25 percent of our neighbors are walled into this kind of poverty. And each unexpected financial emergency adds another brick to that wall.

“If it takes a system of ongoing inequity to maintain those walls, it takes a community to tear them down,” says Reggie Gordon, deputy chief administrative officer for Human Services for the City of Richmond and a founding partner of The Giving Wall.

And that’s the kind of collective effort The Giving Wall invites. On a  simple story-driven website, individual humans who have a need are connected with others who have the resources to meet that need. Every day, new narratives are published. And every day those needs are met, thus removing, brick by brick, the invisible barriers that prevent humans from the progress they desire and deserve.

It sounds too simple, but it works. Over the past twenty months, more than 420 individual needs like Michael’s and Wadiah’s and Naadir’s have been met via The Giving Wall.

Each need posted is less than $300, which, according to Gordon, is the “average amount that triggers a financial emergency from which households struggle to recover.”

Said another way, $300 is the price of a brick in the wall of poverty.

In these small increments, more than $75,000 has moved through the site, funding needs as diverse as career training, small debts and fees, household essentials, groceries, work clothing and equipment, transportation, auto repair, and more.

Where the Need Originates

On any given week, a Believer (how The Giving Wall refers to those who have a need posted) may receive a new laptop to take online courses toward a certification, or a gas card to pay for transport to and from interviews, or have a late bill paid to avoid utility disconnection, or, in the case of Wadiah and Naadir, see a crib in the corner of their small home in a new country.

All of the needs that make their way to The Giving Wall are vetted and approved by partner organizations, whose caseworkers determine if the need is urgent, can be fulfilled by other local organizations, and, if met, contributes to meaningful progress. From the rapid rehousing efforts of St. Joseph’s Villa, to the refugee support from the International Rescue Committee, to the family engagement of Peter Paul Development Center and Sacred Heart Center, to the poverty-reduction work of the Office of Community Wealth-Building, these partner organizations and the dedicated people who work there constitute a system of care for those on a journey toward thriving. The Giving Wall is their partner in removing barriers along the way.

Where the Need is Met

Supporters (how The Giving Wall refers to those who meet a need) come from across the city, region, and state. They are neighbors whose search for making a difference in the life of a fellow citizen has led them to The Giving Wall’s intersection of right-now need, right-now hope, and right-now community.

When Kyle and Michael Graf discovered The Giving Wall online, they said the site’s format struck them as unique and important. “The concept of the smaller, specific needs along with the personalized bios stuck with us,” the Grafs said. “Poverty is cyclical, and a small amount of money can go a long way towards ending that cycle. We found The Giving Wall… and we were moved to action.”

For Supporters and Believers alike, what happens at The Giving Wall isn’t a transaction. Both sides are anonymous, and thanks are given only in the form of paying it forward. What happens instead is a richer sense of progress: on either side of the wall, humans begin to rewrite their own stories of community, compassion, and connection.

While the forces that perpetuate poverty are often abstract and seemingly insurmountable, there is a place where needs are met, humans are helped, community is found, and a city’s story can be rewritten – one brick at a time.

1. Meet a need. If all are met, contribute to the operating fund, and visit again soon. Visit thegivingwall.org.

2. Follow The Giving Wall on Instagram @thegivingwall_richmond so you’re never far from a reminder of the work that’s all of ours to do.

Real Mom Becky Crump is a mother, wife, consultant with The Frontier Project, and health coach with Shift. She lives in the Fan with her husband and family.