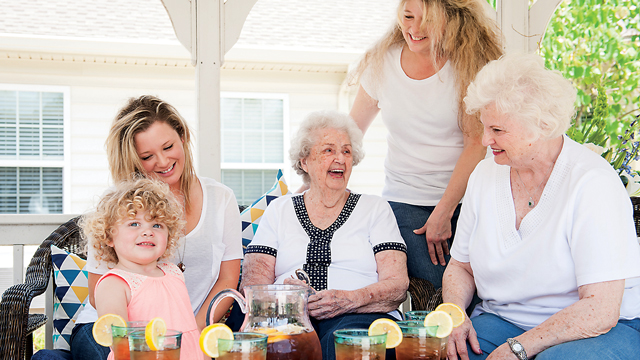 Relatively speaking, most children are very aware of family routines. They know where their toys are, what time they need to go to school, and what to expect when interacting with different people. That becomes more challenging when a grandparent or loved one develops Alzheimer’s disease or another form of dementia. Children will notice the difference in the person and have questions about why a loved one is acting differently than he once did.

Right now, there are over 140,000 Virginians aged sixty-five and older who are living with Alzheimer’s disease or another form of dementia. That number is expected to grow to 190,000 by 2025. That is not just a number; it is our grandparents, loved ones, and friends. More and more children will be exposed to dementia over the coming decade, so it is important that we find the necessary courage to speak with them about the disease.

No matter the age of the child, when speaking about Alzheimer’s disease, it is always best to use simple language. Children and teenagers are more at ease when they hear words they understand. For example, it is best to say: “The illness makes it hard for him to remember things.” We all struggle to remember things sometimes – even when we are young. That is a natural part of life and one that a child can relate to. 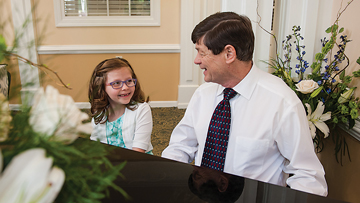 The major difference between a child or teenager in how you approach this conversation is the how. Younger children will not have the knowledge base regarding how the human body works. Keeping the explanation to neutral words like illness or forgetfulness is less threatening, but the message still gets across that something has changed with the loved one. Teenagers will have a better understanding of how the brain works so provide them with a more detailed explanation of what the disease does to a person. Providing that enhanced honesty in the conversation will ensure that the teenager is able to prepare herself for the different stages of the disease.

Honesty is the most important element when explaining Alzheimer’s disease to a child or teenager. By ignoring the subject, we inadvertently stigmatize both the disease and our children. If you need help, the National Institute on Aging, part of the U.S. Department of Health and Human Services, has created an extensive list of resources about the subject at nia.nih.gov.

We all tend to avoid people who are ill. No one wants to be exposed to contagious illnesses, like the common cold or flu. For children, their first reaction to hearing that a loved one is ill might be fear of catching that illness. It is essential that children understand the difference between communicable diseases and non-communicable diseases, like Alzheimer’s disease.

Both children and teenagers can and should have a relationship with a loved one suffering from Alzheimer’s disease or dementia. It is important that they not be forced into an environment where they feel uncomfortable. However, numerous studies by the Centers for Disease Control have shown that interaction between a grandchild and a grandparent with dementia can be beneficial for both. Simple and fun interactions like reading a book together, drawing, singing songs, and playing games make the child more comfortable about the disease and provide the grandparent with intellectual stimulation.

It may be harder to convince a teenager to continue his relationship with a loved one who has dementia. Parents may need to customize the interaction so it’s fun for the teen and the grandparent. This might include visiting a restaurant, cooking and baking, or another activity the teenager used to enjoy with the grandparent before the disease progressed. Developing a safe and welcoming environment between your child and loved one is an important step when trying to manage a child’s perception of Alzheimer’s disease.

Debrief About Each Encounter

Children often do not communicate about how they feel because they may not have the words to accurately express their feelings. Teenagers oftentimes are embarrassed. Parents may have learned how to navigate these complicated moments, but for kids, talking is especially important after interaction with someone who is suffering with Alzheimer’s disease or dementia.

After each interaction, parents should ask their kids how they felt about the encounter with a loved one. The best way to do that is for the parent to admit their own insecurities. Did you feel uncomfortable or sad about the interaction? Express that feeling so your child understands that it’s okay to feel the same way. Keeping an open dialogue with your child will help you both emotionally.

According to the Alzheimer’s Association, there are three stages of dementia and not everyone will progress sequentially to the next stage. Even as the numbers of people with dementia increase, individual experiences won’t be the same. There are numerous resources available from the Alzheimer’s Association and National Institute on Aging to help parents. If we can guide our children’s understanding of each stage of the disease in a productive way, we can break down the stigma associated with Alzheimer’s and ensure that they can continue their relationship with the loved one. 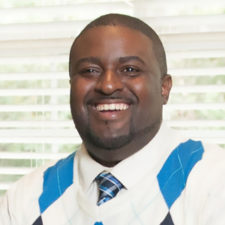 Reuben Canty is executive director of Commonwealth Senior Living at The West End. A certified dementia practitioner and a licensed assisted living administrator, he has a decade of experience working with seniors. Reuben and his wife have a 7-year-old son and they live in Highland Springs.