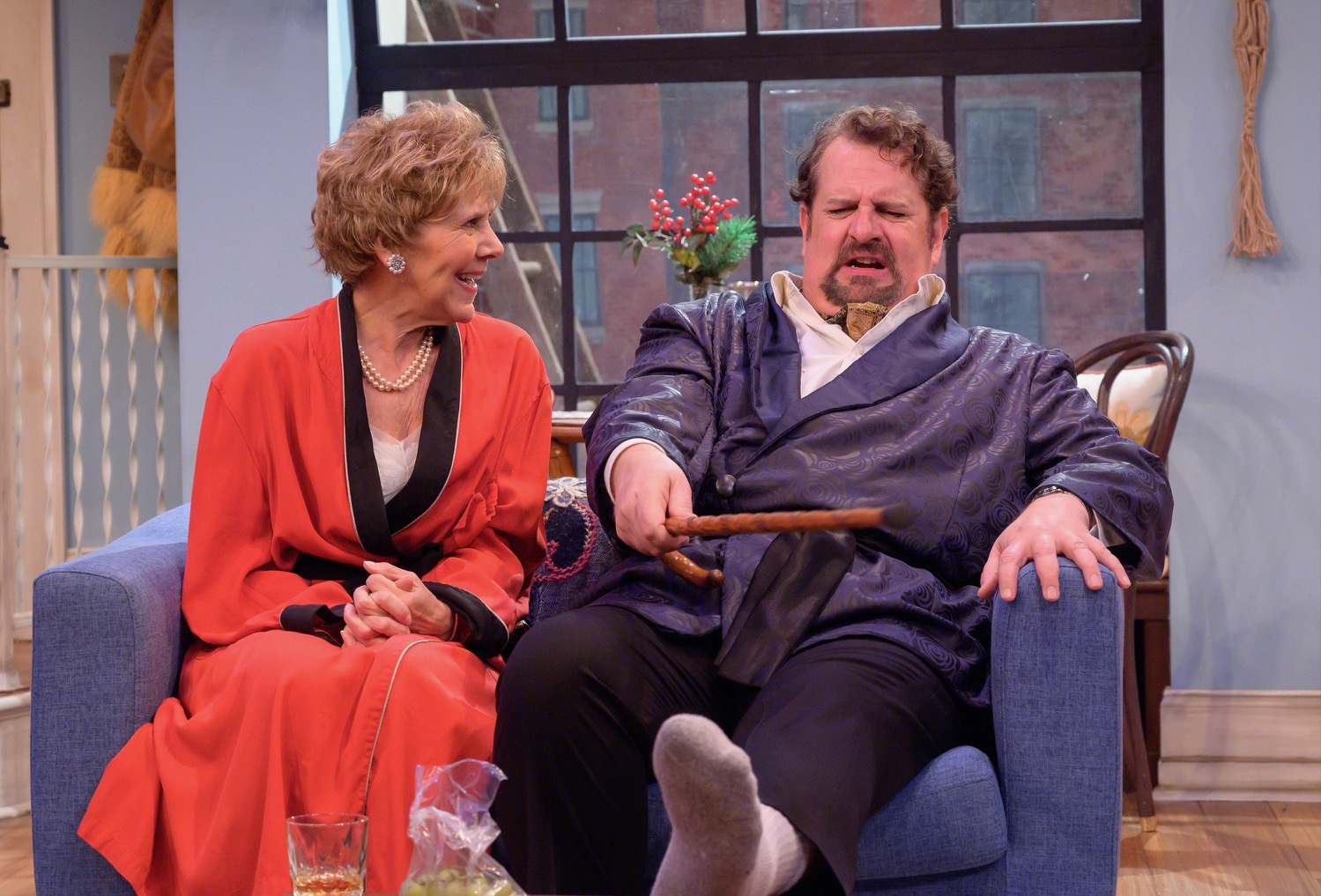 Virginia Rep’s current production of Barefoot in the Park at Hanover Tavern stage marks the reunion of scenic designer Terrie Powers and actors Joy Williams and Joe Pabst, who are playing their original roles of Ethel and Victor from the 2006 production of the show.

“This is actually my third involvement with the play.  Back in 1983 – when the script was a mere twenty years old – I played the deliveryman (in a wig and lots of old age makeup) for a young theatre company in Minnesota,” says Pabst. “I also served as the backstage manager for the production.  This time, the play is almost sixty years old, and I’m not only reprising my role of Victor Velasco, but I’m also revisiting the deliveryman role as the understudy for Eric Williams.”

This beloved Neil Simon comedy tells the story of young newlyweds, polar opposites Corie and Paul, adjusting to living with each other in their tiny, fifth-floor walk-up in New York City. Everything comes to a comic head when Corie sets up a blind date between her dour mother, Ethel, and their exotic neighbor, Victor Velasco.

“I think this play is unique, because it’s not only really, really funny, but it’s all about love and hope and taking chances,” says Williams who is having fun with the role of Ethel. “It’s such an endearing, timeless play. I just love it. But more than anything, at the end of the play, I hope the audience is rooting for all of us.”

The character of Ethel Banks is her favorite role of all time and her goal is to make Ethel approachable, relatable, and vulnerable.

“Not only is the part incredibly well written and incredibly funny, there’s also so much heart in the role. I try to bring to it an underlying love for my daughter, Corie, in the show. That’s what drives her. That’s why she goes along with everything in the play. She loves her daughter and tries to be a good sport about it all.”

Pabst hopes to capture the free spirit of Victor, his strong love of life and his laughter.

“Victor is such a wonderful character. He always finds the positive side to life and wants to experience every bit of it. He’s an adventurer, and a bit of a wild card – an overgrown imp who enjoys taking the road less travelled,” Pabst says. “He’s also got a sense of mystery about him. It’s never explained exactly where he comes from, but I play him as vaguely Eastern European. I created a dialect for him that’s a kind of mash-up of a bunch of different dialects. I jokingly call it ‘James Bond Villain,’ from the movies where it wasn’t exactly clear which country the villain was from.”

The two veteran actors have worked together repeatedly in the past and have formed a great working relationship.

“He is wonderful in this role,” Williams says of Pabst. “I can’t imagine doing this show with anyone other than him. He has such charisma and charm in this role. Not only is Joe very, very funny, he’s also really smart and really skilled. He is so consistent onstage.  I can set my watch by what he’s going to do and when he’s going to do it. And, in a comedy, where timing is everything, that is a real gift. I adore being on stage with him. He’s such a talent.”

Pabst is equally delighted to work with Williams.

“Joy has a wonderful sense of comedy. She makes the perfect partner. We’ve worked together a number of times, particularly in comedies,” he says “We know immediately how to play off each other. If I can make a scene funny, she can make it hilarious. We’re perfectly matched—like a pair of ice skaters who know exactly how to pull off spectacular routines.”

Both actors are glad to be back on the Hanover Tavern stage.

“I love working in this space. I am so glad live theatre is back, and truly grateful to have the opportunity to reprise this role,” says Williams.

Pabst, who is fascinated with Hanover Tavern’s history, says he fell in love with the tavern the moment he saw his first play there nearly thirty years ago.

“When I walk through the building, I feel a sense of that history – what it must have felt like to walk those halls 250 years ago. I am honored to work on the same stage that has seen so many brilliant performances over nearly seventy years,” he says.

In 1996 when Barksdale Theatre moved its operation to Willow Lawn from Hanover Tavern, Pabst found the move devastating.

“When they made the decision to return to the Tavern in 2006, I jumped at the chance to return,” he says. “[In 2006] Barefoot in the Park was the first show that Virginia Rep staged at the Tavern in ten years. It’s now the first show to be staged there in almost two years. To be a part of that return was and is a privilege indeed.”

He believes Barefoot in the Park resonates with audiences today “because it reminds us that we can all give a little in order to get what’s really important out of life,” he says. “The characters seem mismatched at first. When these forces meet, their differences threaten to push the young couple apart. But when they all relax a bit and see the good in each other, they get along splendidly. It’s hard to live in a world of extremes. But meeting in the middle allows you to accept, appreciate and even love the differences in each other.”

Barefoot in the Park runs through January 16 at Hanover Tavern. To provide the highest level of safety, all patrons are required to show proof of vaccination, or proof of a a negative COVID test by a professional technician within 48 hours of the performance date/time.

Patrons must show your vaccination card or a photo of the card on your phone, along with a valid photo ID, when you arrive for the performance. If you are unable to be vaccinated, you may provide proof of a Rapid COVID-19 antigen test taken within 48 hours of your performance. At-home tests will not be accepted.