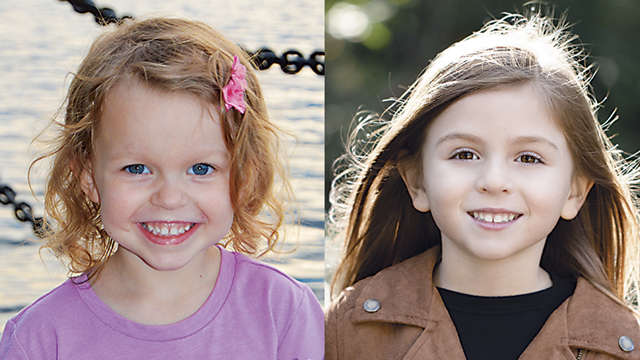 Strangers a few weeks ago, 4-year-old Devyn McDowell and 5-year-old Arabelle Pitera now share something very special in common. The two youngsters are alternating the role of Lulu in the Richmond engagement of the Tony-nominated musical Waitress in February.

Waitress tells the story of Jenna, an expert pie baker working at a local diner and stuck in a loveless marriage. Her salvation comes in the form of her daughter, Lulu. Devyn and Arabelle will each act in four performances during the Richmond engagement.

This will be the first acting gig for both young ladies. “Arabelle is in her second year of tap and ballet at Central Virginia Dance Academy. She performed on a real stage for the first time last year for her recital at the Carpenter Theatre,” says her mom Kate Pitera. “She loved it. She was fearless.”

Arabelle, who lives in Short Pump, is “quite the little actress at home,” her mom adds. “She constantly plays dress up. She plays a different character every day.”

Devyn, whose home is in Midlothian, is a natural performer as well, says her mom Renee McDowell. “I have videos dating back to when she was only a year old with a microphone in her hand, playing every instrument she owns, and singing her favorite songs. She loves all things music and the arts … singing, dancing, concerts, musicals, and hosting matinees at her puppet theatre at home.”

Both Arabelle and Devyn are outgoing, a plus for their acting debut. “Arabelle has a bubbly personality,” her mom says. “She’s always dancing around the house and putting on recitals in our living room.”

Devyn has a big personality, her mom says. “She’s extremely outspoken, articulate, competitive, sweet, smart, sassy, sarcastic … amplified by one hundred. There is never a dull moment, that is for certain.”

Of course, both girls have other interests as well. Arabelle loves doing art projects and making crafts. Devyn is a whiz at building perfectly symmetrical towers and structures with dominoes and other small blocks or magnets. She also enjoys Tae Kwon Do, soccer, the beach, and spending quality time with family and friends, especially game nights with mom and dad.

Both families learned of the auditions for the touring production through Facebook posts. “I was familiar with Waitress, but had never seen it,” says Pitera. “We pulled up a clip of the show on YouTube and showed it to Arabelle. She was very excited and wanted to try it.”

The McDowells knew Devyn loved music and theater and decided it would “be a great opportunity to at least introduce her to that side of things,” McDowell says. “Why not, right? We went in with no expectations, except letting her see how the experience goes and if she were to get the part, a great bonus.”

Auditions were held at the Libby S. Gottwald Playhouse at Dominion Energy Center on November 27. Over twenty-five girls participated in the auditions, which were presided over by members of the company of Waitress. Each child auditioning had a specific time slot for the closed room audition – no parents were allowed in – with casting.

“They said they were looking for a girl who would follow directions and do silly things like march around the room and not be intimidated,” Pitera says.

Both girls got the good news in less than two weeks. “We were all extremely surprised and excited to receive the news,” says McDowell. “We celebrated later that evening with a sparkling grape juice toast.”

Each girl received videos of the production and a script for rehearsal purposes. They will rehearse with the cast the afternoon of opening night.

The girls will be getting paid for their work. Both will have the opportunity to join the Actors’ Equity Association for their speaking role. “That’s a huge honor,” Pitera says.

It means a lot to Arabelle to appear in the show. “I’m so excited,” she says.

The two families have already had the opportunity to get together for breakfast and meet each other. “It’s been nice to have another family to share this journey with,” says McDowell. “I’m confident this is going to be a fun, exciting, and rewarding experience for all.”