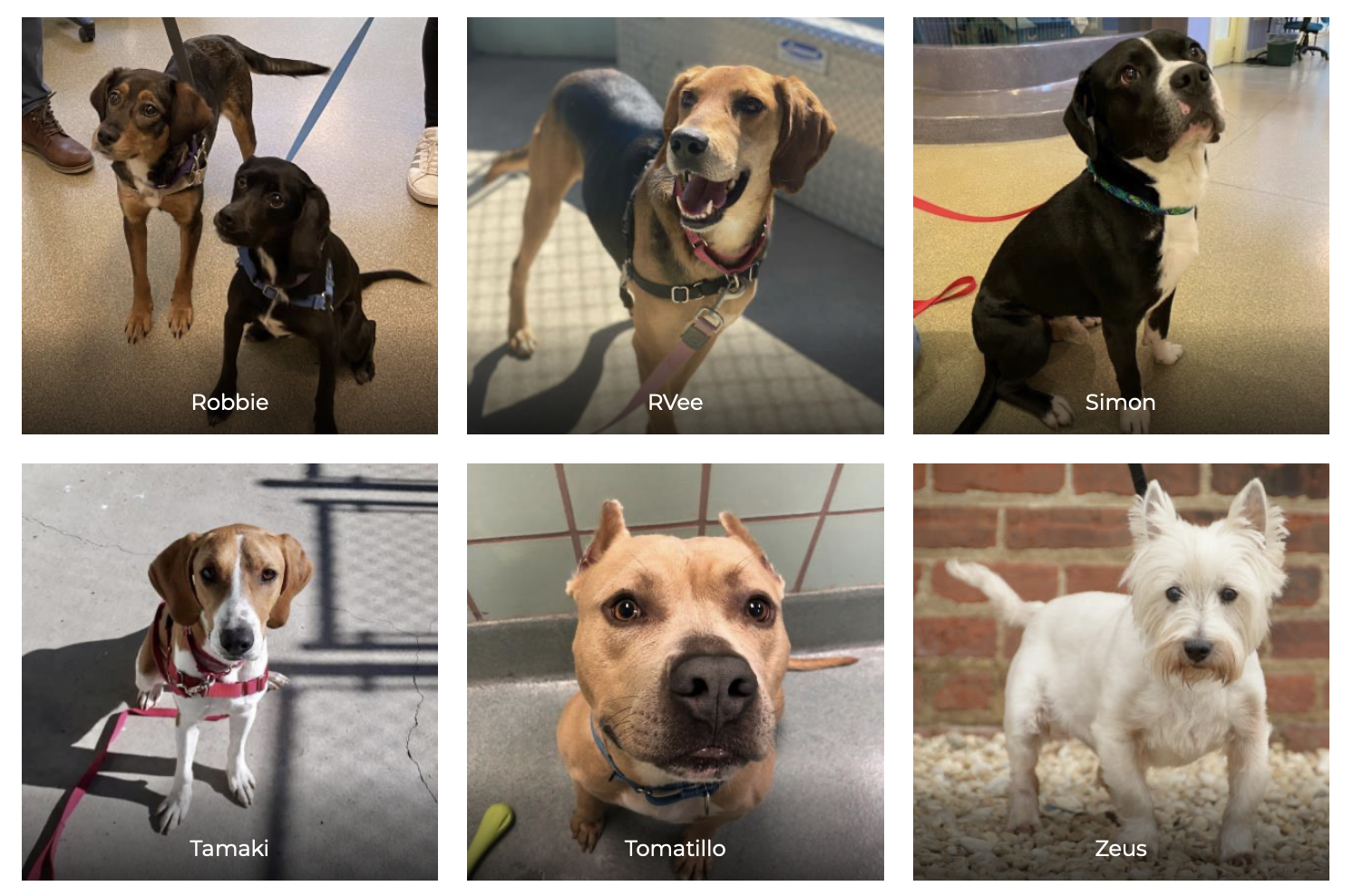 After months of having people follow her medical progress on social media, Gal, a medium-sized mix dog who had been transferred to Richmond SPCA, is learning her way around the streets of Washington, D.C. with the Farris family.

“She is great. She’s definitely getting used to living in a city,” says her new mom Caroline. “She loves to stop and check out everything, and she’s getting more comfortable here. Her personality is coming out more. Her transition has been smooth.”

Gal came to the Richmond SPCA last November when her former owners surrendered her to the Powhatan County Animal Shelter. At the time she weighed about fifty pounds but would have weighed closer to sixty pounds in normal circumstances.

“She was covered in a multitude of growths that had been untreated, and the county shelter reached out to our admissions team about transferring her to our humane center to receive veterinary treatment,” says Tabitha Treloar, director of communications. “We knew she’d have to undergo multiple surgeries because of the size and number of the masses.”

Before Thanksgiving, the Richmond SPCA’s associate veterinarian, Dr. David Molinas, performed a first round of surgery, during which he spayed Gal and also removed the

“largest mass from her neck/shoulder area as well as the right side of her mammary chain (akin to a partial mastectomy). All of these were sent for biopsy,” Treloar says.

Gal went through the surgery like a champ, Molinas says. “It blew my mind how she recovered so well. She lived with these tumors that weighed multiple pounds for years. I didn’t give her enough credit in the beginning.”

While Gal healed and doctors waited for the pathology report, Gal was sent into a first-time foster home – the home of Amanda Freed and her family. “We had been on the foster list for a couple of months. Gal was the first dog that came up (that could be in a home with kids and animals) so we jumped on it,” Amanda says, adding she and her husband, Chris, have four daughters under twelve.

The first thing Gal did when she came into the family’s house was sniff the perimeter, as dogs do. Then she laid down on the couch and “took a three-hour nap,” Amanda says.

Gal fit into the home nicely. “She’s a happy, joyful dog, a personable dog with a nice personality,” Amanda says. “She has a sweet, calm disposition and she’s great with the kids. She’s very affectionate.”

While Gal was having fun with her foster family, doctors got back her biopsy reports. There was both good and bad news. The large mass removed from Gal’s neck was a low-grade mast cell tumor that was expected to be cured by the surgery. The bad news was while some of the mammary tumors were benign, there was a malignant tumor with evidence of local spread to a lymph node that was also removed in the first surgery.

The biopsy report did not change the SPCA’s veterinary team’s plan in any significant way.  “A week later, the staples were removed from her first surgery, at which time Dr. Molinas assessed her healing and pain level to determine when she would be ready for a second surgery,” Treloar says. “Gal spent the holidays with her foster family and was a delight to the shelter medicine team at the Richmond SPCA each time she came for a checkup.”

In January, the Freed family brought Gal back for her second surgery. Gal came through the surgery well and was eventually cleared for adoption.

“Gal is the strongest dog I have ever worked on,” says Dr. Molinas. “If you had done part of that surgery on a normal dog, it would have shown more discomfort. Both surgeries were three hours, and she had large incisions. The next day she was eating and her comfort level was high. She is a real loving dog.”

With Gal cleared for adoption, the Freed’s knew they had a difficult decision to make – adopt Gal or let the Richmond SPCA find a forever family for her. They knew they wanted to foster other dogs in their home.

“That’s part of the reason we decided to let the SPCA adopt her out. Having the ability to foster other dogs was important to me. If we adopted a second dog, fostering a third was beyond our capacity,” says Amanda, who adds the family has a three-year old muggle named Penny. “We went back and forth because she did fit in our home. Ultimately, we decided we have an amazing dog in Penny. We knew that Gal was amazing, and we wanted someone else to have that experience.”

Caroline Farris credits Amanda and her family for taking such good care of Gal (now renamed Betty). “Gal was not intimidated by people. She had an awesome foster experience. She’s so sweet,” Caroline says.

Gal’s recovery wouldn’t have been possible without the Richmond SPCA’s Cinderella Fund, which is devoted entirely to the veterinary treatment and rehabilitation of sick, injured, and neonatal homeless pets.

The pets saved by the fund are the community’s most vulnerable, at-risk animals. Out of the 3,621 dogs, cats, kittens and puppies that the Richmond SPCA took in between October 1, 2019 and September 30, 2020, more than 80 percent were treated for sickness or injury before being adopted to lasting homes.

Contributions to the Richmond SPCA’s Fur Ball exclusively support the Cinderella Fund. The Fur Ball, held virtually last year, raised more than $387,000 for the fund. The date for this year’s Fur Ball is November 6.

“All of Gal’s veterinary care at the Richmond SPCA – from surgeries performed by Dr. Molinas, lab work, and biopsies that were sent for pathology, and the specialist consult that proclaimed her clear of metastases – was provided through the Cinderella Fund,” says Treloar. “Gal’s remarkable story of recovery is a direct result of the community’s support of the Fur Ball.”

Read more about the Cinderella Fund below.