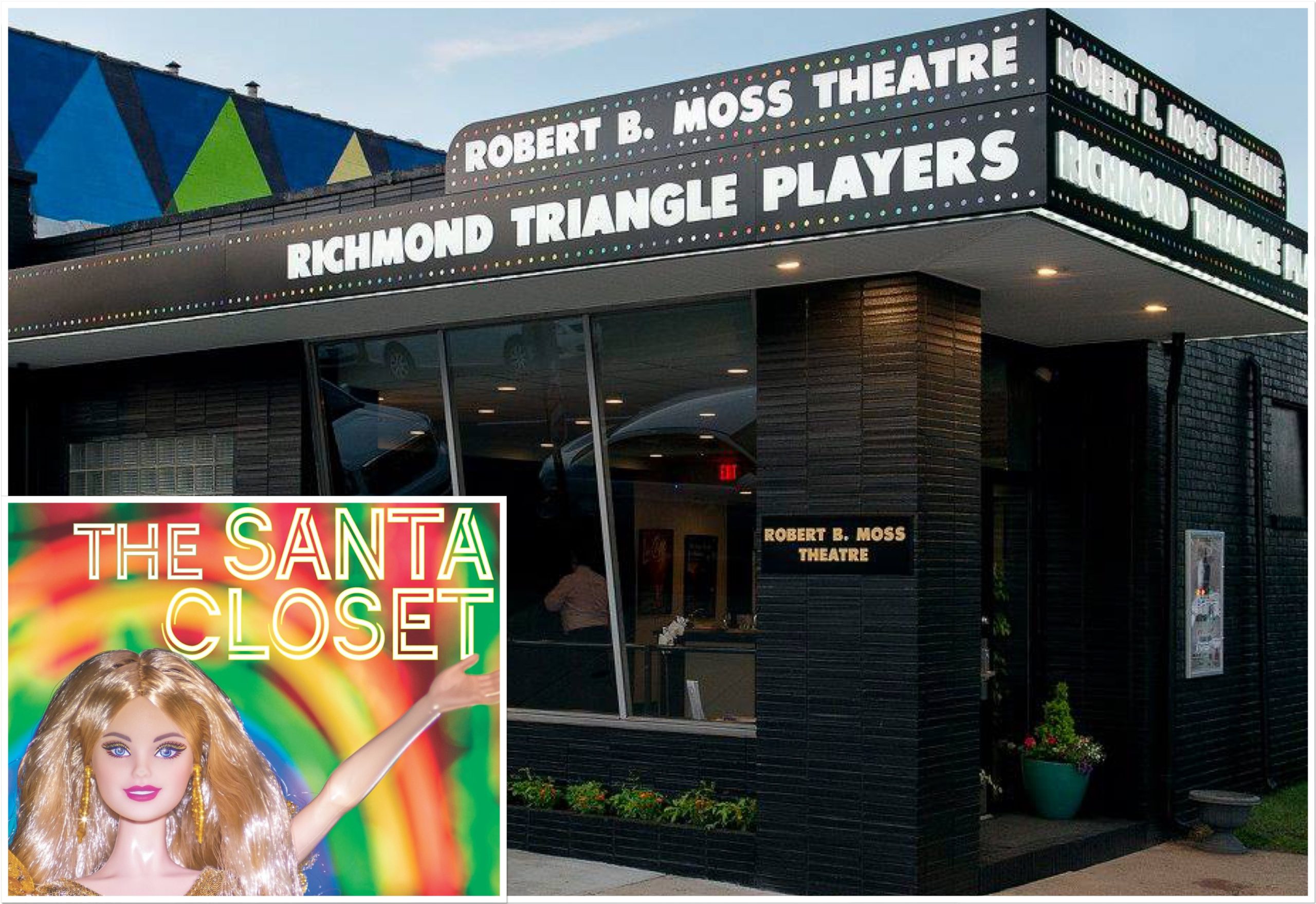 The Santa Closet will be Richmond Triangle Players’ first theatre production since the start of the pandemic and the show’s star, Eddie Webster, is thrilled to be back on stage.

“It’s a wonderful opportunity that I’m very grateful for. RTP has been very supportive throughout this process,” he says. “It’s wonderful to be creating with them again.”

Webster, who has appeared in Times Square Angel, Corpus Christi, and as Gould in Grey Gardens, admits the rehearsal process has been anything but traditional.

“We did about a week-and-a-half of work through Zoom meetings and then moved into the theatre. It was a very different atmosphere and process,” he says.

Masks and social distancing are now the norm at the theater. “It’s definitely hard to get used to,” Webster says. “RTP has done a great job of keeping everyone safe.”

The theatre has held two cabarets during the pandemic. “That went really, really well,” says Triangle’s executive director Philip Crosby. “We sold out the in-person shows.”

Seating capacity for this production will be limited to comply with Virginia’s re-opening guidelines for entertainment venues. Instead of the usual ninety seats, Triangle is only selling twenty-seven seats for each in-person show. Other CDC-recommended safety protocols will be followed to ensure the safety of patrons, as well as RTP staff and artists during the show. Masks must be worn by patrons – all those entering or inside the theatre.

“Everyone is appreciative of the COVID-19 safety procedures we put into place,” Crosby says.

“Christmas has been politicized over the last several years, and there are a lot of people who think that traditional Christmas is being attacked,” he says. “I think our play shows that there are many different types of Christmases and that everyone celebrates the holidays differently and that those differences are good and important.”

The Santa Closet is about a little midwestern boy named Gary who writes a letter to Santa asking for a doll for Christmas.

The letter has an impact on Gary’s parents and on Santa, who “in our play is a real man, with a complicated backstory, and who lives in Christmas-town with all of your favorite holiday characters, who also have something to say about Gary’s letter,” Webster says.

The letter from Gary nudges Santa out of the closet and into a heated culture war. The play “pulls at the holiday heartstrings while asking the question ‘How do we speak honestly and openly to children and each other about LGBTQ+ lives and issues?’, says Crosby.

The play has approximately fifteen characters and Webster plays them all. A challenging task for any actor.

“Director Nora Ogunleye, has done a great job with digging into each character and making sure I understand exactly where that character is coming from and their background,” he says. “This is very helpful because the characters change so rapidly. Having that preparation is vital.”

Webster says his favorite character in the play is Gary. “He has a really great journey and a really great moment with Santa toward the end of the play.”

The 80-minute play by Jeffrey Solomon is very clever, Crosby says. “It suits our mission. It’s mostly funny, but I think people will be touched by it. It’s about love, being who you are and being accepted for who you are. It’s a message that never goes out of fashion. People who are fans of our holiday shows are really going to like this one.”

The production runs through December 19 and is recommended for fifteen and up, so bring the teens. Streaming options are available as well.

Reserved seat tickets can be purchased online at RTP’s web site at www.rtriangle.org, through RTP’s Facebook page, or by leaving a message on the RTP Ticket hotline at 804-346-8113. Tickets for the live productions are $35 for Friday and Saturday evenings, and $30 for weekday evenings and Sunday matinees.