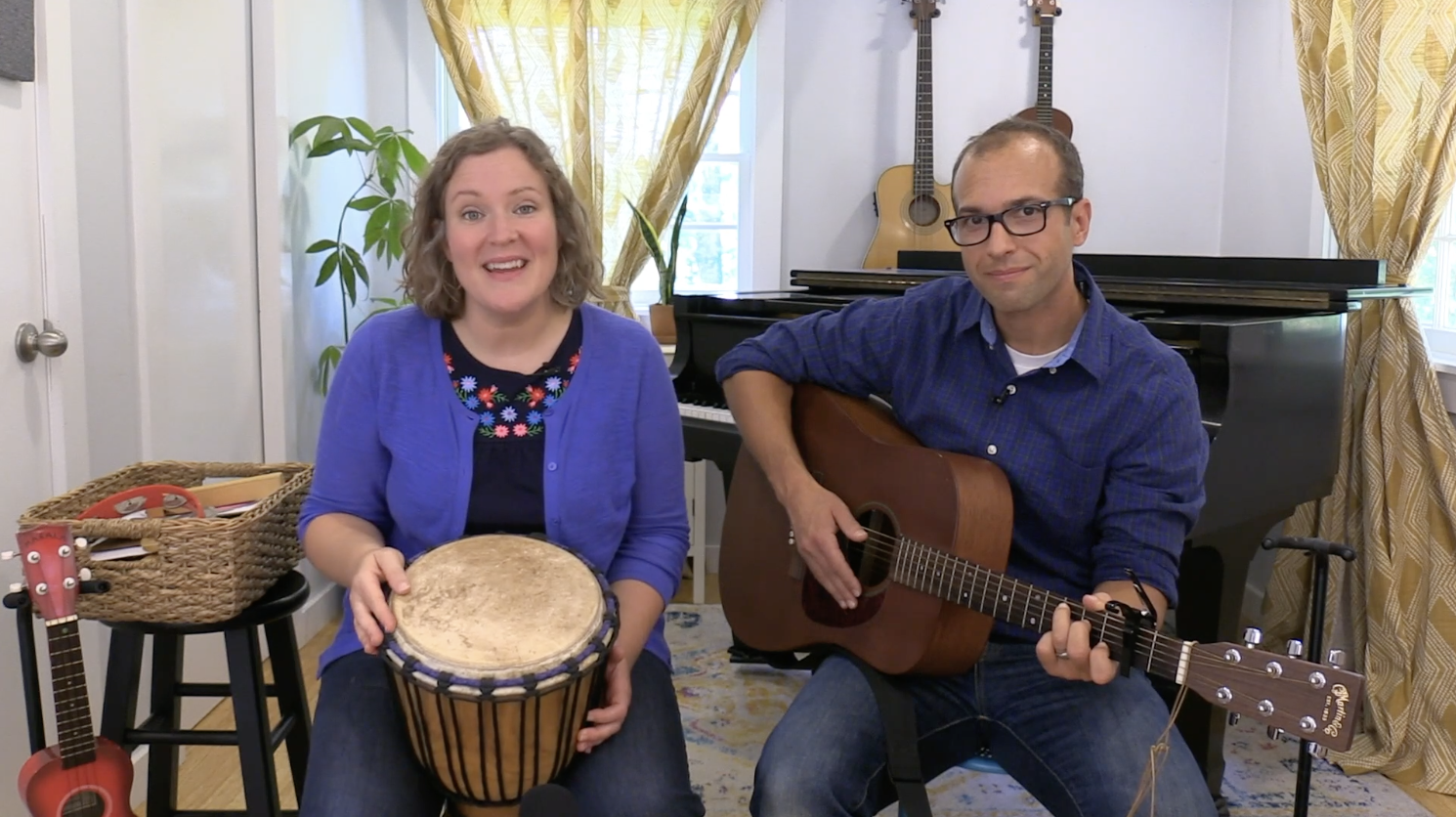 Richmond native Mary Anderson looks at music as a gift, a lifeline that helps children as they grow and develop.

“Music has been my number one passion since I was itty bitty,” says Mary, who, with her husband Mike, teaches children about music. Their early childhood education program, Songs & Stories with Mary and Mike, is on VPM Plus as part of its Home Learning programming.

The show uses musical play as the pathway to engage young children ages two to seven in learning and features different themes each week.

Each show is designed to meet Virginia pre-K school readiness standards and uses the power of music to engage and entertain while supporting children’s brain development for a lifetime of curiosity and learning.

Mary, the mom of two sons, ages six and eleven, loves to observe children interacting and engaging with music. “I want them to see our show and see themselves and think, I can do that.”

Sending and teaching the message of love and confidence is a goal for teachers everywhere, she says. By featuring special guests in each episode, “Songs & Stories” brings real teachers, artists, musicians, authors, and community members directly to children to inspire them and help them grow.

It Begins with Music

Mary, who graduated from J.R. Tucker High School and has a bachelor of music degree from Virginia Commonwealth University and a master’s in music education from Boston University, was on track to be a symphony trumpet player when she sidetracked.

It all started when she began volunteering in a pre-school program to teach music classes. “I loved the energy of the young children and seeing the power of music work through them,” she says. “Every time I step in front of children, I get this rush about what we are able to do in their learning process. On camera, when we start recording, I picture myself in a class of children.”

Mary met her husband, Mike, at Boston University. Both are musicians and music educators. The couple launched My Music Starts Here in 2016 and converted their detached garage into a studio that serves as their home base.

The Charlottesville-based company creates and produces Songs & Stories with Mary and Mike. They have also created more than 200 short videos sharing songs, poems, steady beat activities, and dances – child-centered and teacher-centered – that are accompanied by sample plans for pre-K classrooms and virtual learning environments.

“We are now focusing on the television program,” says Mary, who also taught pre-K through fifth grade for thirteen years.

During the first year after she left the classroom, Mary volunteered in more than seventy-five preschool classrooms learning what teachers needed to create musical learning experiences in their classrooms. “That’s why we designed My Music Starts Here, so non-musical pre-school teachers could implement high-quality musical learning experiences for their students’ brain development,” Mary says.

It’s been shown that musical activities stimulate development in every area of the brain. Music helps language, listening, and social skills as well as executive functioning skills such as planning and organizing.

When the pandemic hit, Mary was concerned that pre-K students would miss out on any kind of high-quality learning experience. “I convinced myself that we have to be on PBS,” she says. “We have to reach these children.”

VPM looked at the couple’s website and YouTube videos and “loved what we were doing,” Mary says.

Mary and Mike film their shows in their home studio without a film crew — Mike handles filming, editing, and the like. The process for the show started in July. Since August, they have produced ten episodes of the show, which are airing now. “We were doing videos in much smaller pieces,” Mary says. “Doing a 30-minute episode was a huge learning curve.”

Taking what she was doing in the classroom and making it applicable to television was also a learning curve, she says. “We are very much self-taught. We had to teach ourselves how to do it and it had to be fast.”

For the most part, guests on the show do Zoom presentations. When interviews have been done in-person, they usually take place outside where everyone can be safely distanced.

For their episode “The Sounds of Cuba,” they talked with the managers of the restaurant Havana 59 in Richmond who opened the restaurant early to let the couple in to film musical segments. “We needed a Cuban flavor in the background. There was no one else there,” Mary says.

“When we met with Dr. Davison, we were outside at a safe location,” Mary says.

Mary and Mike want their shows to be more than just music. Mary has a passion for children’s books and wants to integrate them into the show by crafting an episode around a book.

“We also use inspiration from amazing teachers in science, math, and reading but with arts and a music thread,” Mary says. “That ties it all together.”

One of the show’s missions is to give children access to “these incredible teachers, professors, and world-class musicians. We see ourselves as a conduit for this,” Mary says.

Both Mary and Mike are inspired by Fred Rogers, better known to kids as Mister Rogers from Mister Rogers Neighborhood, who made children feel seen, heard, loved, and cared for.

“You felt safe in his hands,” Mary says. “That is absolutely what we want our viewers to feel. Kids don’t have what they need to be successful. In our show, we want them to learn, but at the end of the day, I want a child who watches us to feel loved, cared for, and that they are important. We always end with the message that you are brave, curious, strong, and a beautiful learner.”

Mary openly discusses the fact that they have never done a show like this and that she is nervous about it. “So often kids are led to believe if they try something and fail they are not good at it, but that is not true,” she says. “We want to send this message to kids — sometimes things are hard, but I am going to do it. We want to help them believe in themselves.”

The message that Fred Rogers gave to the adults in the world is “children are meant to be cherished, respected and not patronized,” she says. “To the child, the message is you are perfect the way you are.” 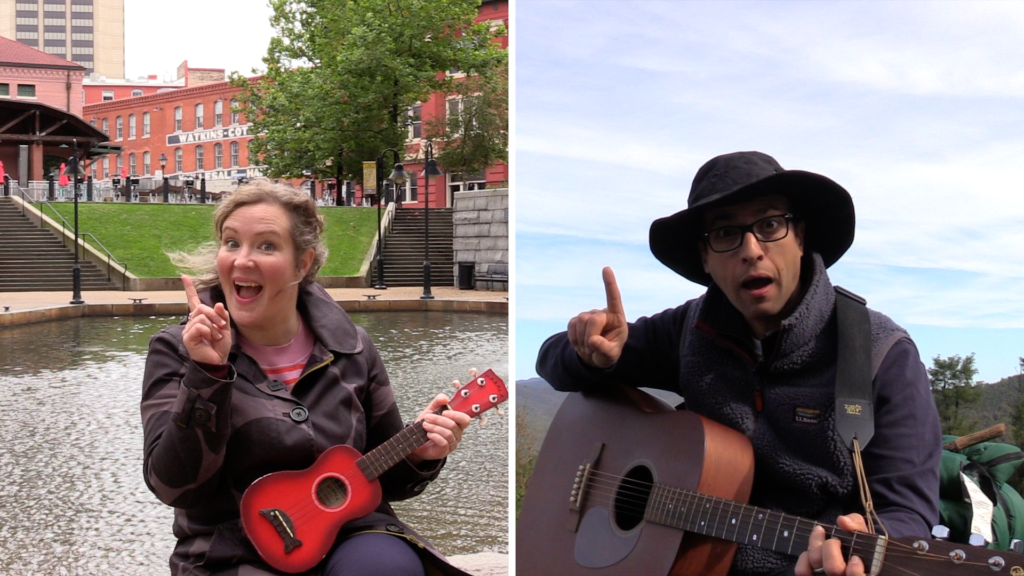