Words and pictures by Teresa Schardein

If you’re here after reading the article on Virginia’s State Parks in this month’s RFM, you know my family has visited a lot of parks over the years. Our family has stayed in a wide variety of cabins, ranging from 1-room log cabins built in the 1930s by the CCC

(Civilian Conservation Corps) to the brand new 6-bedroom lodges, all of which allow pets for an additional nightly fee. There are so many ways you can narrow down where you want to go – be it time of year, distance, interest, and of course, availability.

I have made most of our selections by referring to a “most romantic/favorites” list I found online, as well as the list of new cabins completed in 2017. However you decide where to stay, I hope my list of things I have learned about Virginia State Parks helps make your stay more enjoyable.

1. Staying at a Virginia State Park can be so easy. You can check availability and make reservations online at reserveamerica.com.

The cabins and lodges (not camping cabins) come with the beds already made (maybe not the top bunk, but the sheets will be there), bath and kitchen towels, refrigerator, stove, microwave, coffeemaker, toaster, dishes, silverware, pans, a roll or two of toilet paper, and a small bottle of dish detergent to get you started. Soap/shampoo dispensers have recently been installed in the bathrooms, which is why the park system won a Virginia Green Travel Award in 2018.

2. It is very affordable. The parks have been known to have a 25% off sale on gift certificates that starts the Monday after Thanksgiving. There are also last minute discounts on Thursday and Friday throughout the year for cabins that have not been rented for the upcoming weekend. Virginia State Parks has a couple of photo contests each year with gift certificates for the top winners. I have heard a new one will be starting in July. While the State Park website is a good resource, I have had good luck staying informed about Virginia State Park’s discounts and contests by following their Facebook page.

3. Lodging varies by park. Some of the more popular cabins get booked pretty quickly, especially on the weekends. During the offseason, you can rent for as few as two days, but during the summer, cabins rent by the week. The rental start day varies from park to park and even from cabin to cabin within a park. If there are any vacancies during the summer as the date approaches, shorter rentals are accommodated.

4. Douthat State Park and Hungary Mother State Park are two of the six parks with cabins built by the CCC. At Douthat, they built a lot of different styles to test what style was best to build in other parks. We loved the covered porches on both Douthat cabin 6 (a 1-room log cabin with a fireplace, bed and sofa in the main room, small kitchen, and bathroom) and Hungary Mother cabin 7 (2-bedroom cabin with a beautiful large stone porch). These two parks have restaurants that have regular hours during the summer and are available for catering all year long. The original sections of both restaurants were also built by the CCC and have nice decks with views of the water. Check the State Park website for days and hours.

5. Although Grayson Highlands State Park doesn’t have cabins, it is still one of my favorites due to the wild ponies and spectacular vistas. The first day we visited, we must have seen well over one hundred wild ponies. Every time we turned around, there was another group of ponies. We went back three days later and only saw two. They say not to feed the ponies and to stay a safe distance. While I never saw anyone feed them, staying a safe distance was sometimes a challenge, as both days we came across ponies walking the same narrow trails we were on. With the park at 4,500 acres and very little fencing, I guess there is no guarantee that you will see ponies, but we will definitely be going back.

6. The new Bowen Lodge (6 bedroom, 3 bath, sleeps 16) at Twin Lakes State Park is one of our favorites for kayaking or paddle boarding. It has a large covered porch all the way across the back with several rocking chairs. It was the perfect place for four generations of our family to gather for a relaxing weekend. This lodge has a large open floor plan, with a dishwasher, washer and dryer, and plenty of seating for a large group. We loved that the lot had a gradual slope down to one of the lakes so you can very easily launch your boats and boards right from the bottom of the property.

7. At Claytor Lake State Park, most of the cabins are waterfront and have a couple docks shared by other cabins on a first come, first served basis if you want to fish or tie up your boat. The two bedrooms are all the older cinderblock constructionwith screen porches, and the lodges and thre bedrooms are the newer style, with cathedral ceilings making them feel very spacious. We have stayed in Cabin 18 (three bedrooms, two baths, sleeps eight) which is across the street from the lake and has a gas fireplace, dishwasher, and large wraparound open porch with rockers. Last summer, we rented both Lodge 14 (six bedroom, three baths, sleeps sixteen, waterfront) and Cabin 13 (three bedrooms, two baths, sleeps eight, waterfront) for our family group of twenty-four, it was so much fun, we have rented them both again for this summer. Cabin 13 is universally accessible and has ADA-compliant fishing access. The water is so clear there. True story: My husband actually lost his glasses, we had no idea when or where he last saw them and I spotted them in waist deep water.

8. Westmoreland State Park is only an hour and a half from Richmond. The cabins there are older, with some built by the CCC, but the furniture and mattresses have been updated recently. There is an Olympic size pool with concession during the summer and a beach on the Potomac River. It is a great place to look for shark teeth and sea glass. We have stayed in both cabin 24 (2-bedroom cinderblock with screen porch) near the edge of a cliff overlooking the river and also in Potomac River Retreat Lodge (5-bedroom, five baths, sleeps sixteen). I’ll have to admit after staying in the brand new lodges at Twin Lakes State Park and Lake Anna State Park one of our granddaughter’s first impressions was not great. It is a bit unusual and appears to have been made up of two old river houses connected together – it has three living rooms and two kitchens. That said, it did not take long to realize this is a special place, and we cannot wait to go back. The main living room has big windows and French doors giving you a great view of the Potomac River. The large patio has patio tables and chaise lounges, a fire pit on the beach and a pier with gazebo at the end, just for lodge guests. They also rent the lodge out for meetings, retreats, etc.

9. At Kiptopeke State park, all cabins and lodges are the newer style, and I would choose the one that fits the size of your group. They have 2- or 3-bedroom cabins and several 6-bedroom lodges. I don’t see any of these as having a special feature or location to highlight one in particular. The park is on the Chesapeake Bay and a great place for birding, kayaking, and letting the little ones play without having to worry about big waves or undertow. The Southern Tip Bike and Hike Trail is right across the street and is the perfect place to bike to the Eastern Shore of Virginia National Wildlife Refuge. Cape Charles, a neat little town, is only ten miles away.

10. Virginia State Parks put on a lot of great programs/events, and you can always attend and participate in these even as a day visitor. Chippokes State Park offers tours of the Jones-Stewart Mansion, a fossil walk, and a number of other programs repeated on a very regular basis all year long. We were very impressed that Hungary Mother State Park,besides the more expected programs (canoeing the lake, making walking sticks, night hikes, etc.), they also offer a number of programs outside of the park including, biking the Virginia Creeper Trail and canoeing the New River (they provided equipment and transportation for a very reasonable fee). Staunton River State Park has been designated as an International Dark Sky Park by the International Dark Sky Association and has programs with high-powered telescopes and seasoned astronomers throughout the year. James River State Park has recently earned the same designation, so you could watch for similar programs there. You can enjoy free concerts at some of the parks during the summer including Belle Isle State Park, Westmoreland State Park, Hungary Mother State Park, and Natural Tunnel State Park. When looking for a park last fall to observe the fall colors, we chose Natural Tunnel based on the number of programs they were offering during the off season. You can find a complete list of Virginia State Park programs under “What to Do” on the website.

I hope you’ve found some useful information and that you get a chance to enjoy the parks as much as we have. One thing that is consistent, the Virginia State Park system does a great job and is always improving. They have recently built yurts at twelve state parks, but we have not tried these yet. It seems like it would be a neat experience. There are also major renovations scheduled for most of the CCC cabins, beginning with Staunton River State Park this fall, with the rest probably starting in the fall of 2020. We hope to see you at a State Park soon! 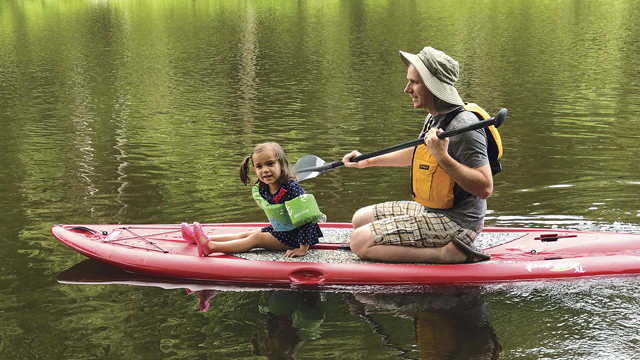