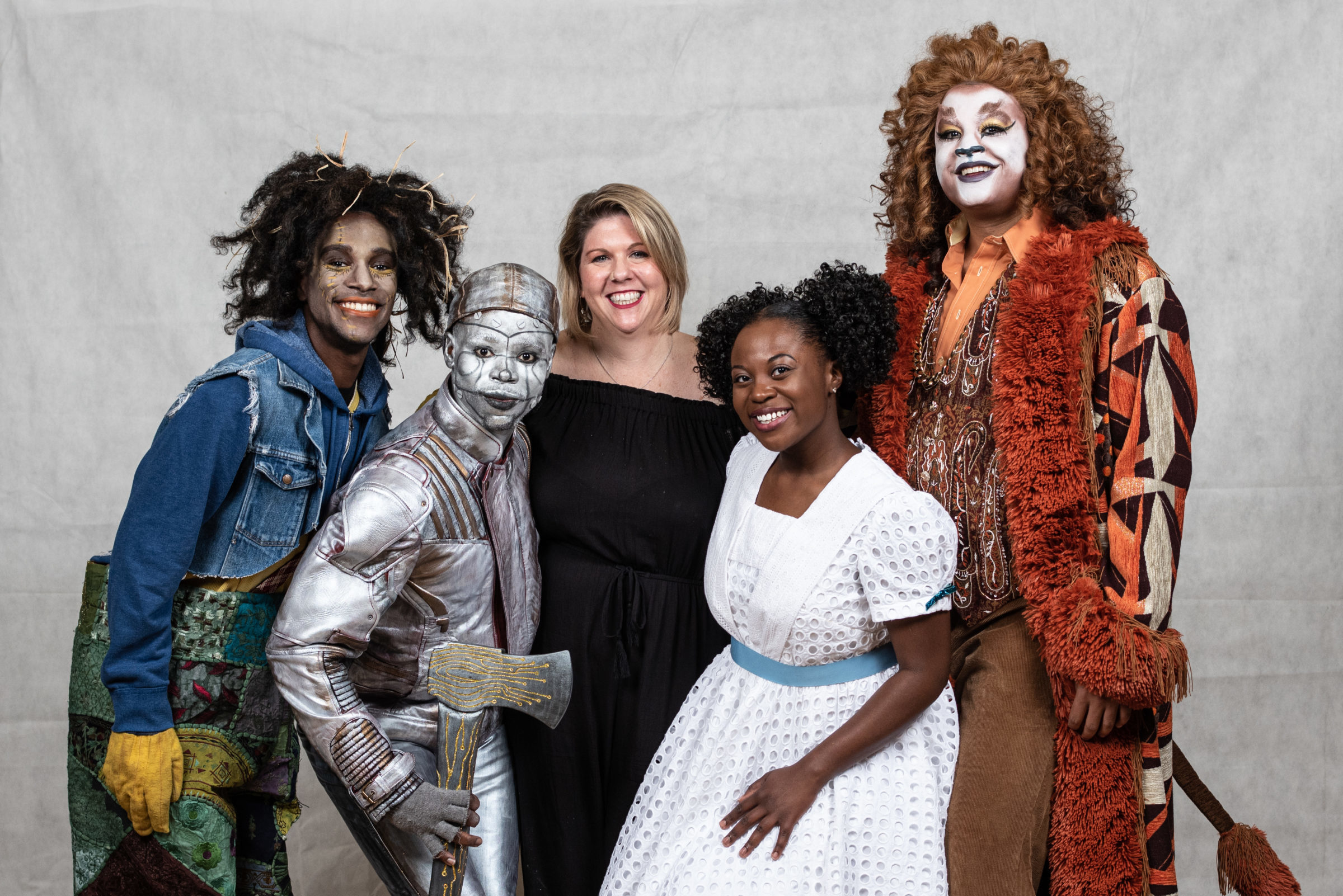 Building the costumes for Virginia Rep’s upcoming production of The Wiz is turning out to be a one-of-a-kind experience for costume designer Jeanne Nugent.

“The Wiz has its own unique direction, both the show itself and the way the director [Virginia Rep artistic director] Kikau Alvaro has taken us,” says Nugent.

In the production, members of the ensemble are the yellow brick road as well as the ominous tornado that sends Dorothy on her journey and the bright red poppies she encounters on her way to Oz.

Everything in the costumes has to be lightweight and sturdy, Nugent says. “We have to get creative. For example, the centers of the flowers in the poppy hats are made of spray-painted Easter eggs.”

The scenery and costumes in the show change from world to world. Munchkin Land is the most colorful stop on Dorothy’s travels, while the world of the Wicked Witch of the West, Evilene, is darker and scarier. “When we are doing Oz, everything is brighter with more greens and golds. Everything has a futuristic look,” Nugent says.

The show, a reimagining of L. Frank Baum’s classic children’s novel The Wonderful Wizard of Oz in modern African American culture, will open on June 21 at Virginia Rep’s November Theatre.

Set to the sounds of R&B, soul, and pop, The Wizfollows Dorothy and her friends as they Ease on Down the iconic yellow brick road. The Broadway production won seven Tony Awards, including Best Musical in 1975.

Creating Costumes is a Process

Nugent started working on ideas for costumes in late February after the start of production meetings. “We’ve been meeting every two weeks so everybody understands what other departments are doing,” she says. “It’s very collaborative.”

The show was the first musical in the 1970s with “a full African American cast,” she adds. “Everybody that does a production of the play can interject their own flavor into the show, unlike The Wizard of Oz.”

The Wiz pulls from urban influences, allowing the creative team to incorporate interesting cultural aspects into the show. “We’ve tapped into musical styles, art, and an Afro-centric vibe,” says Nugent. “It’s a throwback to the 1970s with technology that takes it to the future.”

In the Virginia Rep production, some members of the ensemble play multiple characters, calling for rapid costume changes and clever costumes. Alvaro has allowed Nugent to be creative with the costumes. “He gave me enough guidance, but he also gave me freedom,” she says. “It’s been a fun process. I use anything I can from our in-stock collection, but this isn’t a show where I can use a lot of that stock for costumes.”

In doing her research for the show, Nugent discovered the work of an African American artist who creates masks out of found objects. Those masks served as her inspiration for the Flying Monkeys’ masks. “I used a Fry Daddy slotted spoon and Ball jar lids for canning,” she says. “I’ve spent a lot of time walking down the aisles of Lowe’s. I’ll also be using wires and old computer parts in the show. I haven’t figured out where I am going to put them, but they are going to be somewhere on someone.”

Nugent found the costume for the Tin Man to be the hardest to create. “I was struggling,” she says. “I did the initial design and I wasn’t loving it. I wanted to change it. I didn’t like the way I designed him initially.”

She ended up going more futuristic than her initial drawing. “His costume is more space-age and modern,” she says.

Unlike some of her peers, Nugent didn’t major in costume design in theater when she was in college. Her studies included art and graphic design. She got involved in theater when her children started appearing in local theatrical productions. “I started out helping with costumes,” she says. “I learned how to sew, and fast forward after about sixteen years, here I am. It’s a lot of work but also a lot of fun.”

She enjoys the process from beginning to end. “I see all of the departments working together to put on these big productions,” she says. “When I see the show on opening night, it’s very satisfying.”

Read about Richmond’s Jerold E. Solomon, who plays The Wiz in the Virginia Rep production, in RFM.

The Wiz is showing at Virginia Rep June 21 through August 14. For showtimes and tickets, go here.