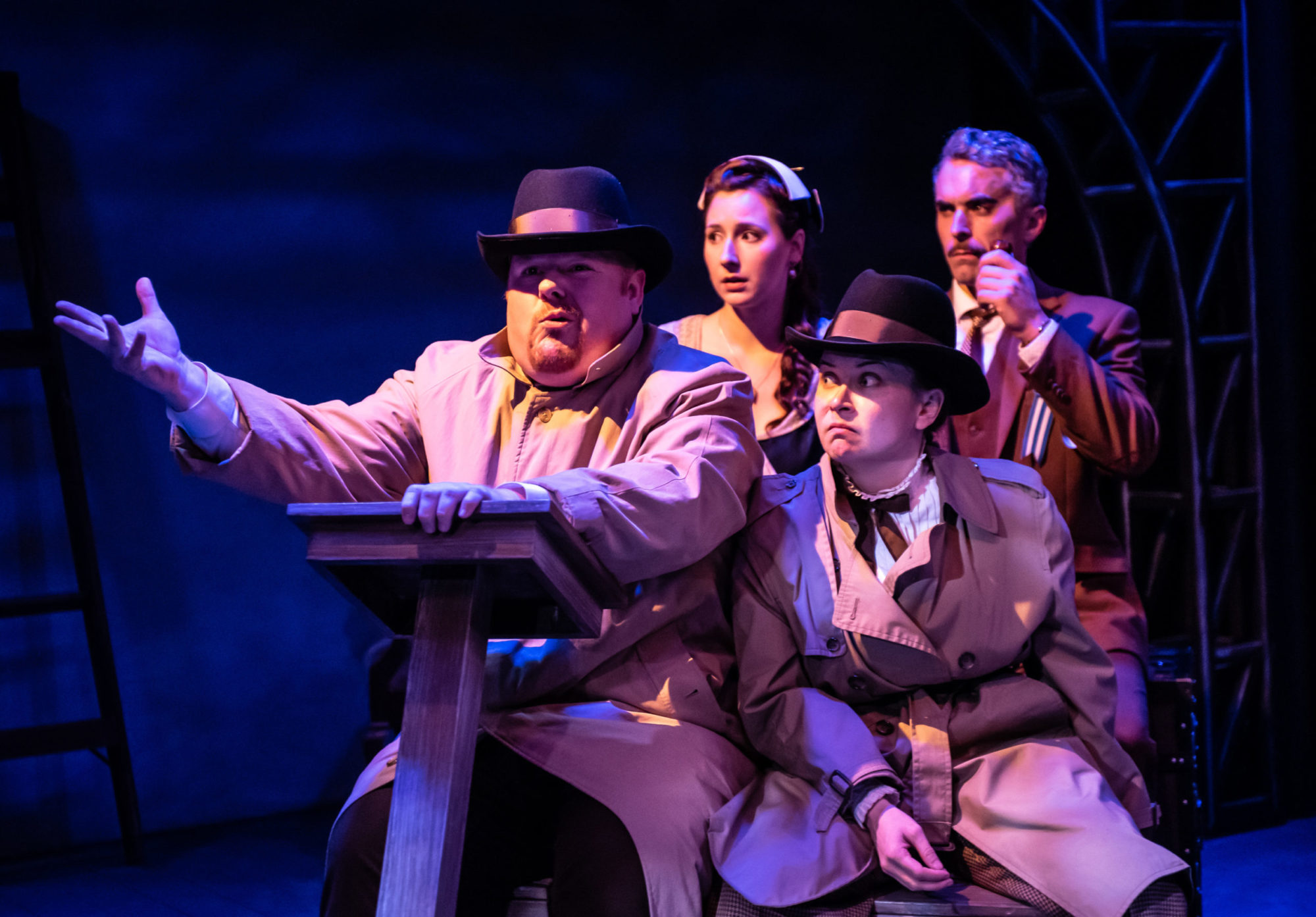 Virginia Rep Artistic Director Nathaniel Shaw wanted to stage The 39 Steps at Hanover Tavern because the play is “just darn fun,” he says.

A spoof on the 1935 Alfred Hitchcock thriller, the Tony and Drama Desk Award-winning play opened Friday at Hanover Tavern and mixes a Hitchcock masterpiece with a juicy spy novel. A dash of Monty Python turns this into a fast-paced whodunit with a boatload of zany characters played by a cast of four.

“The show does a wonderful job of honoring and also poking fun of that melodramatic style of the 1930s,” says Shaw, who is directing the production. “I also think there’s a wonderful love story inside this hilarious romp. You have a story about two people who have never allowed themselves to love before. They find each other and meaningful love inside an adventure that feels like a spy thriller.”

The 39 Steps is very different from the shows that usually play to audiences at the Tavern. “The Tavern has been doing a lot of kitchen-sink comedies and dramas that exist inside the home and I love that,” Shaw says. “This show is thirty-two short scenes in various locations.”

Two of the four characters in the production, the Clowns, play upward of fourteen characters each. “Irene Kuykendall who plays The Woman plays three characters,” Shaw says.

Alec Beard who is making his Virginia Rep debut only plays Richard Hannay, the hero of the production. “He maybe leaves the stage long enough to get a sip of water one time,” says Shaw. “All of the actors are working really hard.”

Casting the show was quite “easy,” he adds. “We saw a lot of brilliant people. Ultimately the four actors that emerged were quite clearly the right people.”

Audra Honaker jumped at the opportunity to play one of the Clowns in the production. She liked the fact the show was so unique.

Honaker has been working with the production’s dialect coach to nail down the various dialects she has to use. The characters she plays are “differentiated by the accents,” she says. “That’s the challenge of the play, but it is also one of the things I was most excited about. I love the Scottish accent but it doesn’t come easily to me. I’m working on it.”

Each of her characters, as well as the multiple characters Paul Major plays as a Clown, has some different type of clothing or accessory. “We add coats, hats, badges, etc. to out base costumes,” Honaker says. “We use things that can be added quickly.”

Honaker’s penchant for comedy is innate and always spot-on. “I remember being a little girl and making my baby brother laugh,” she says. “I like for people to have a good time. Bringing joy to people is a good thing.”

This show tests her quick wit and endurance. “There are scenes where the play slows down a lot and scenes where it’s wild and quick,” she says.

Shaw encourages all the actors in the production to contribute to the creative process. “The best idea in the room wins even if it’s not my idea,” he says. “A lot in this play is nurtured by the ideas of the actors.”

While the show, which is less than two hours, is “endlessly silly, it also has heart and an important and resounding message inside all that silliness,” Shaw says.

The 39 Steps runs through March 29 at Virginia Rep at Hanover Tavern. For showtimes and tickets, go here.