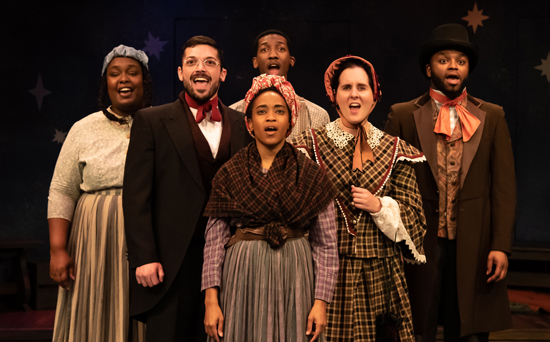 Amber Martinez didn’t know about Harriet Tubman’s sleeping spells until she was began research for the study guide she created for Virginia Rep’s production of Harriet Tubman and The Underground Railroad. The show is playing until March 1 at The Children’s Theatre at Willow Lawn.

Born into slavery, Tubman escaped to freedom in the North and became a conductor on the Underground Railroad, risking her life to help others find their freedom.

Her sleeping spells started after she was hit in the head by a brick that cracked her skull. “She would randomly fall asleep during a conversation,” says Martinez, Virginia Rep’s arts in education manager. “Those sleeping spells and her injury caused her to have vivid dreams.”

A lot of what Tubman did in her life was based on those dreams, which the abolitionist likened to a religious experience with God who “told her to rescue her people,” Martinez says.

Before starting to create the educational materials, Martinez did as much research as she could do regarding the subject. She also had to go through the Standards of Learning and Curriculum to make sure “the materials match the SOL material that students are reading in the classroom,” she says.

She also sat down with the show’s director, Katrinah Carol Lewis, and went through the original touring guide for the show – the show has been touring the country for Virginia Rep for thirty years. “She let me know what she would like to have included or expanded on,” Martinez says. “I took some of the ideas and used them on a lobby display poster.”

The poster includes information about the Richmond Slave Trail. “It’s not part of the Harriet Tubman story, but it’s a way for us to expand learning for people in Richmond,” Martinez says. “We wanted kids to see that part of this city’s history.”

Working on the study guide has been a real learning experience for Martinez. “I didn’t know that Harriet Tubman worked so hard during the Civil War,” she says. “She was involved as a spy for the Union army, and she worked for the Union as a nurse and cook because of her knowledge of plants and herbs.”

Martinez also enjoyed learning about spirituals and how they were used as coded songs. “Harriet used music to give enslaved people hints on how to escape,” she says. “For example, she loved the song Wade in the Water. That was used to tell enslaved people they had to walk in the water to avoid being seen or smelled by the dogs.”

Another song used by Tubman was Swing Low Sweet Chariot, which let enslaved people know they needed to be able to escape that night. “The Underground Railroad was the sweet chariot and it’s coming to the south to take enslaved people to freedom (swing low, sweet chariot, coming for to carry me home),” Martinez says.

If enslaved people heard Go Down Moses, they knew Tubman didn’t feel like it was safe for them to come out of hiding because danger was around. The song Follow the Drinkin’ Gourd was code for the Big Dipper, which points to the north. “It suggests escaping in the spring when the days are longer,” Martinez says. “Moss grows on the north side of dead trees and if the Big Dipper is visible, you can follow the moss north.”

The lyrics tell them what to do – “Well the river bank makes a mighty good road, dead trees will show you the way, left foot, peg foot, travelin’ on, follow the drinkin’ gourd.”

Researching these types of stories is a joy for Martinez. “Being able to do research to make a theatrical experience more rounded out is fun. I really like it,” she says.