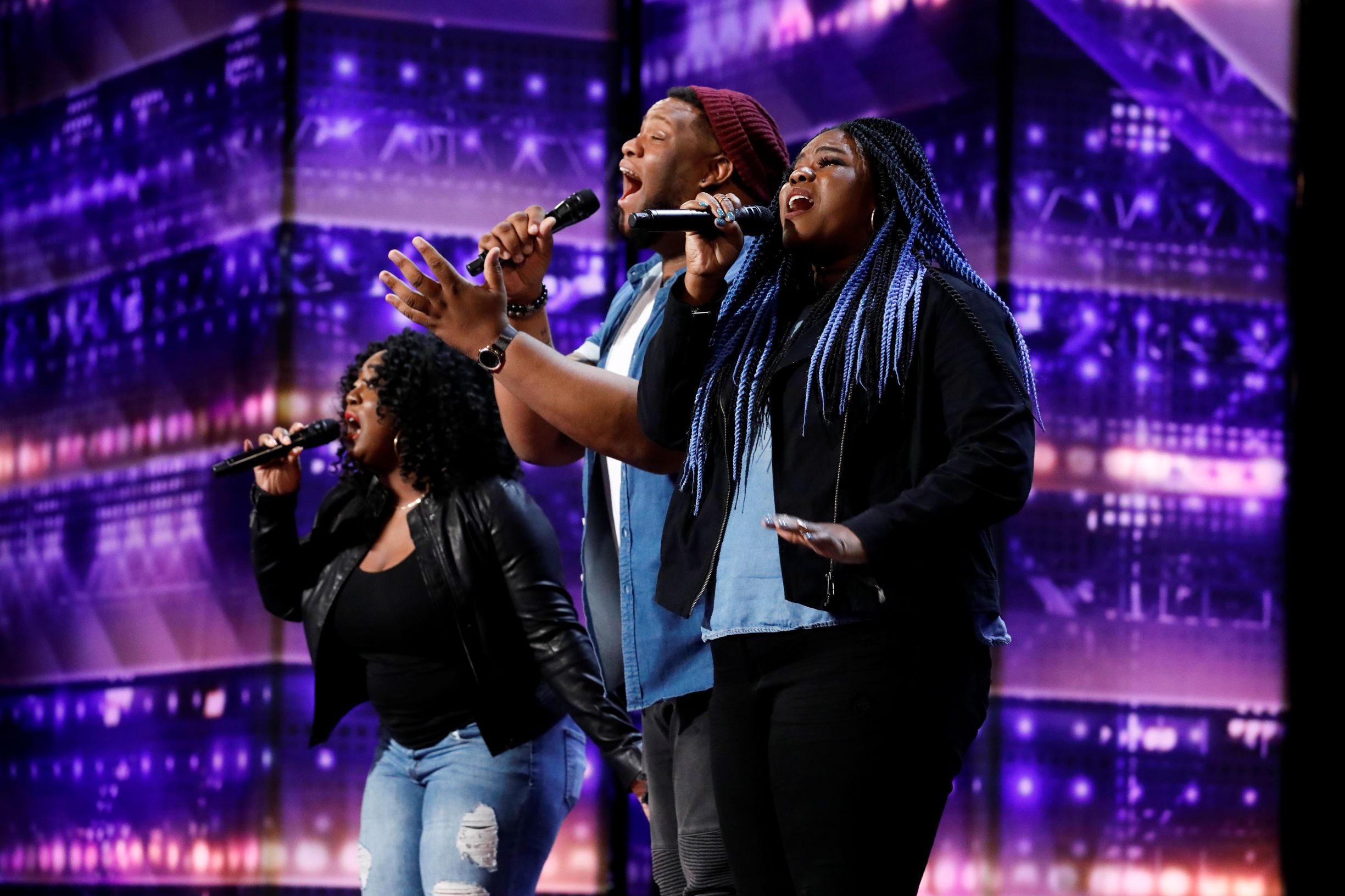 When members of Richmond-based a capella trio, Resound, quit their jobs in 2018 to devote all their time to music, they didn’t foresee that just two years later they would be performing on one of the biggest stages in the world as part of NBC’s mega-hit America’s Got Talent.

Their audition performance, which was taped in Pasadena, Calif. right before the pandemic hit, aired on AGT’s June 9 show.

When the opportunity to audition for AGT presented itself, the group – Jessica Fox, Joseph Clarke, and Mariah Hargrove – thought “what do we have to lose?” says Hargrove. “Let’s go and try it out. We would rather try and fail than not know what we could have done.”

Hargrove didn’t mind the large crowd in the venue, but she was a bit nervous about singing in front of the four celebrity judges, especially Simon Cowell who is known to dish out some blistering comments. “I was like, I hope we do well,” Hargrove says.

Fox felt a pang of anxiety thinking about the cameras, knowing that millions of people would be watching the show. “I thought what if Simon tells me I am tone deaf and should never sing again,” she says. “It was the pressure of knowing that everybody will see what the [judges] do say.”

While there are other competition shows on television featuring musical performances – think American Idol and The Voice – the group felt like AGT was the right fit because it features different types of acts, everything from sword swallowers and magicians to singers and dancers.

“We have always been non-traditional. It’s hard to fit us in a category,” Fox says. “AGT gave us the freedom to be ourselves more than any other competition has to offer.”

After they finished singing What the World Needs Now is Love, made famous by Jackie DeShannon in the 1960s, all of their fears subsided when the audience and all four judges gave them a rousing standing ovation. “We went on to grab the hearts of the judges and audience,” says Hargrove.

Finding their Voice as a Group

A love for singing is the thread that connects all three members of the group. Fox, 30, and Clarke, 29, both grew up in Mechanicsville and graduated from Hanover High School. Fox is also a graduate of Virginia Commonwealth University.

“I’ve been singing all my life. My earliest memories are of singing,” says Fox, adding that Clarke also started singing early in life. “His mother is a musician and she sang at my parent’s wedding. Our families have been friends since we were toddlers.”

In high school, Fox and Clarke performed with the chamber chorus. Clarke was also in show chair and Fox was in the all-girl jazz group, Satin Dolls.

Hargrove, 26, grew up in the city of Richmond and later moved to Varina. She graduated from J.R. Tucker High School with honors and is now studying through Ashford University’s online degree program.

She also has been singing all of her life. “It’s one of my favorite things to do. It’s how I can de-stress,” she says. “I don’t remember a time when I wasn’t singing.”

Fox and Clarke met Hargrove when all three sang background for the play Road to Redemption. They didn’t set out to be a group, but they knew they had found their calling after posting a rehearsal video for a church performance on their social media pages. “We kept doing videos and after a while people were asking [if we had a] name and Jessica came up with it,” Hargrove says.

“We wanted something that was faith-based, but had musical meaning,” Fox says. “Resound has two definitions. The first is to echo and fill space with sound. The second is to proclaim, sing the praises of.”

The group has produced one album, First Christmas that includes the song they featured on AGT, and has songs on all digital outlets such as Spotify, Apple Music, Google Play, Amazon Music, and YouTube.

When they started performing, the group sang gospel music because it was familiar and comforting to them – all members in their respective churches. “As time went on, we wanted to spread hope and joy, but we never forget our gospel roots,” says Hargrove. “We are an inspirational group. We believe in hope, love, and bringing people joy.”

The Road to AGT and Beyond

The group started getting recognition when gospel singer Byron Cage recorded their arrangement of the song Total Praise. Later they did a Christmas medley that was retweeted by singer, songwriter and actress Ariana Grande in 2014.

“It had 6 million views,” Hargrove says. “We went to Good Morning America because they saw the video. We’ve had a lot of opportunities since then, but it was those two things that solidified us as a group.”

When all three quit their day jobs to pursue music, they only had one gig on the calendar, says Hargrove. “We didn’t know how we were going to pay the bills and then God sent [Christian singer] Lauren Daigle our way. We went on tour with her.”

Now that the pandemic has closed most live venues, the group’s schedule has included several recording projects as well as a couple of local performances. “We’ve gotten a lot of calls for background vocals that we are able to do,” says Fox.

This month they performed What The World Needs Now and Black History, a medley of spirituals, at the 5,000 Man March in Richmond. “We gathered at the statue of Robert E. Lee. That statue represents pain for people of color,” says Hargrove. “We were protesting police brutality as well as white supremacy and systemic racism.”

They are performing Thursday, June 18, at 5:15 p.m. hosted by The Martin Agency on IG Live @martinagency. Juneteenth Jubilation includes musical guest Resound, plus storytelling and a live poetry reading of Bury Me In A Free Land by Frances E. W. Harper, a black female poet who was an abolitionist, suffragist, and one of the first African American women to be published in the United States. The poem will be read by vocalist and performer Nickey McMullen, followed by a powerful musical performance from Resound.

While they are not looking too far ahead in the AGT competition, Fox, Clarke and Hargrove would love to get to the finale. “As a group we have all experienced financial hardship,” Hargrove says. “If we win and get $1 million, we would find a way to enjoy ourselves, but we would use the money to set us up so we don’t have financial hardship again. We would also use the money to help others as well.”