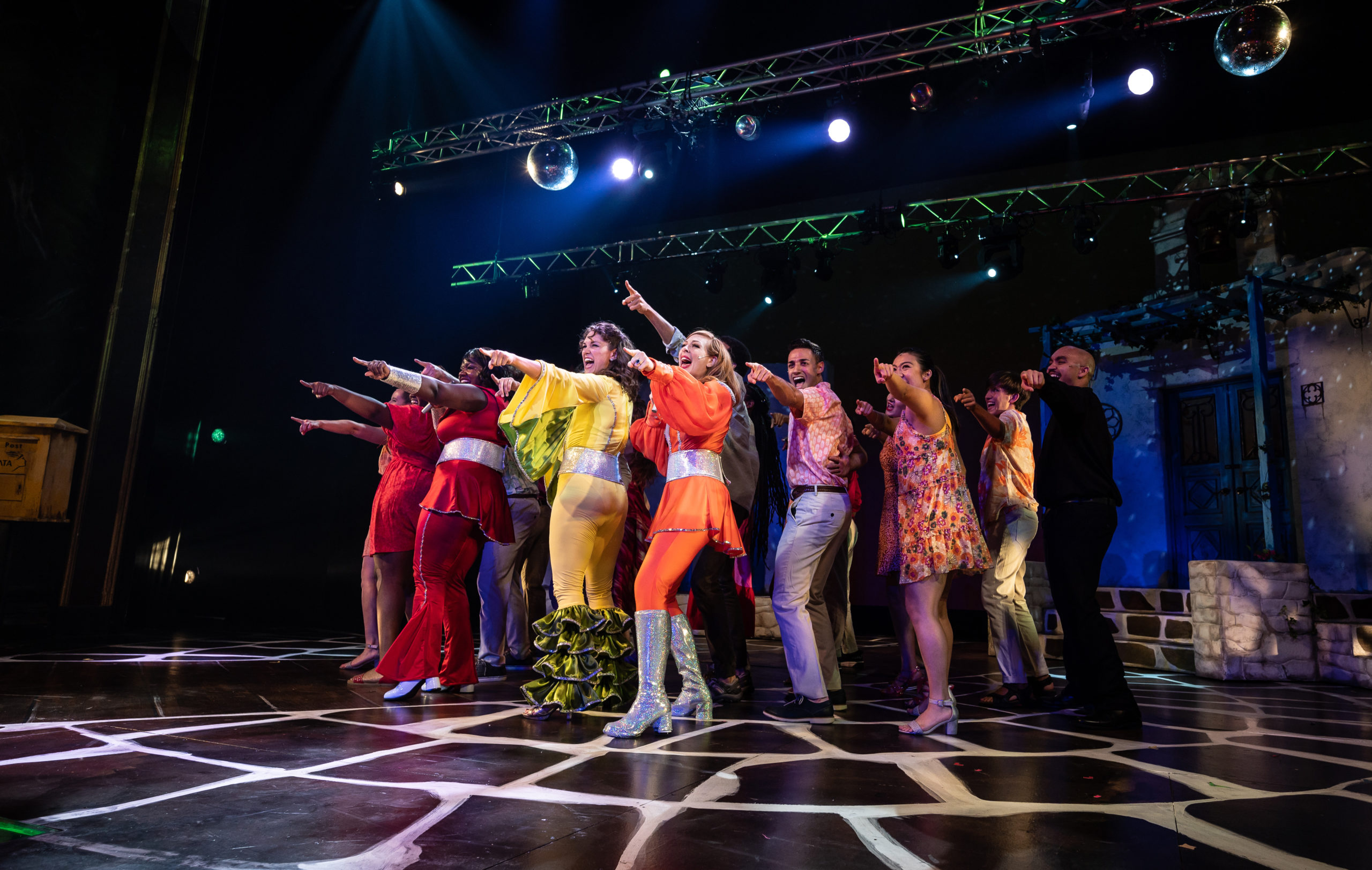 If you’re expecting to have a ball when you see Mamma Mia! at Virginia Repertory Theatre, you won’t be disappointed.  This fun and light-hearted production will turn you into a “Dancing Queen,” as this musical takes you on a reminiscent journey through the schmaltzy, yet lovable ABBA songbook.

Mamma Mia!, directed by Happy Mahaney, is a story of a young woman who invites three of her mother’s former lovers to her wedding– to great amusement – in hopes of discovering which is her biological father. In the process, both mother and daughter explore their respective romantic relationships, a staple of most Broadway musicals.

Other relationships are also explored, such as the one between mother Donna, and daughter Sophie, performed by Emelie Faith Thompson and Hannah Jennison respectively. Like many young people, Sophie has ambivalence about her relationship with her mother, especially as it pertains to the youthful mischief that left Donna a single mother.

Less obvious, and possibly even more touching, Mamma Mia! explores Donna and Sophie’s relationships with their close friends. Sisterly love and support comes shining through in several touching scenes for both mother and daughter through their friendships. Sophie’s friends Ali (Havy Nguyen) and Lisa (Jana Prentiss) provide listening ears and playful distractions as she sorts through her evolving situation.  Donna’s friends Tanya (Grey Garrett) and Rosie (Catrina Brenae) also prop Donna up through unexpected turmoil in part by hilariously resurrecting their musical performances from their younger days as a singing trio, complete with spandex, bell bottoms, and glitter.

Vocal performances and music (musical direction by Sandy Dacus) were spot-on. Jennison (Sophie) delivered tunes like “I Have a Dream“ and “Honey, Honey” in her crystal clear, angelic voice. Thompson (Donna) hits every note and shows off her range, especially with “The Winner Takes It All” and “Money, Money, Money.” Brenae (Rosie) is alluring as she delivers “Take a Chance on Me,” leaving me holding my breath to see what happens. Garrett (Tonya) is a riveting presence, acting head-to-toe in every scene, especially with “Does Your Mother Know?”

And as the whipped cream, sprinkles, and great, big, fat cherry on top of this luscious, glitzy concoction, the combination of choreography by Ashleigh King and costumes by Sue Griffin and Marcia Miller Haley is stellar. The energy of this talented team gave this production an exciting, fun, and memorable wow factor that will make you and your whole family want to stand up and cheer.

Mamma Mia! deals with themes of single parenting, wanting to discover your roots, sexual liberation, marriage for the right or wrong reasons, being self-reliant, and dealing with past regret. That said, it’s also an high-energy, music-infused show that will have you and your kids dancing in the aisles. Recommended for about age eight and up.

Over the past twenty-five years in higher education as a teacher, coach, and a faculty and student development professional, Dr. Susanna Wu-Pong Calvert has taught and counseled hundreds of students and faculty members on interpersonal relationships and personal development. She is the founder of Foundation for Family and Community and Healing.