Testing For and Reducing Radon

Radon is a naturally occurring radioactive decay product of uranium, which is found in trace amounts in certain types of bedrock and soils. In Virginia, uranium and its radioactive decay products are most often found in certain types of granite and shale. Emitted as a gas, radon naturally works its way up through permeable soil where it can enter homes or buildings through any type of foundation – basement, slab, or crawl space.

Exposure to high levels of radon gas has long been suspected to increase a person’s risk of contracting lung cancer. Many scientific studies have concluded that exposure to radon may contribute to as many as 21,000 cases of lung cancer in the United States each year.  Radon exposure is believed to be the leading cause of lung cancer among victims who have never smoked. People who have a smoking history may be more vulnerable to the effects of radon. The Environmental Protection Agency (EPA) has set a recommended action level of 4.0 picoCuries per liter (pCi/L) for radon in residential air.  It is estimated that about one out of every fifteen homes in the country has radon levels that exceed this standard.

Of Virginia’s ninety-eight counties, forty-six have been designated by the EPA as high risk for radon in indoor air. At least a few elevated radon test results have been found in every county in Virginia. In the Richmond Metro area, all the counties immediately to the south and west of the city have been designated as high risk. Although Richmond City and the counties of Henrico and Hanover are officially designated as low risk, many high radon test results have been reported in these jurisdictions – particularly in their western regions and near the James River. Due to changes in local geology, the radon risk generally decreases as you move east toward the Chesapeake Bay.

The only way to know if radon is a problem for a particular property is to test for its presence. In real estate transactions, it is always best to hire a professional tester who is trained to follow proper testing protocols. The Virginia Code stipulates that professional radon testers or mitigators operating in Virginia must be certified by either the National Radon Safety Board (nrsb.org) or the National Radon Proficiency Program (nrpp.info).

In most homes, the highest indoor radon levels will usually occur in the coldest winter months, while the lowest levels usually occur in the summer. Testing during major storms should be avoided. The minimum testing period should be at least forty-eight continuous hours. If the initial short-term test result is close to a level that requires action, you may consider retesting with a long-term test. A long-term test that lasts an entire year is the most accurate method to determine the true year-round average radon level.

The most commonly used mitigation method employs a collection pipe of 3-inch or 4-inch diameter PVC which is attached to a low-powered electric fan that runs constantly to supply continuous suction. The system is designed to pull radon gas out from beneath the foundation to prevent it from entering the occupied regions of the home. The gas is vented out the top of a pipe that should terminate twelve inches above the gutter line of the roof. The exhaust gas is naturally dispersed outside of anybody’s potential breathing zone. The piping can either run through the interior of the home, or it can be attached to an exterior wall. The fan must be located either in an unoccupied attic, a garage, or on an outside wall. The pipe should be labeled and have some sort of visual indicator that shows the homeowner that the fan is operating properly. For an average home, a radon mitigation system may cost $800 to $2,000, and can usually be completed in one day. The Virginia Code mandates that radon mitigators follow the installation standards as presented in ASTM (a voluntary standards developing organization) to make your home as safe as possible for your family. 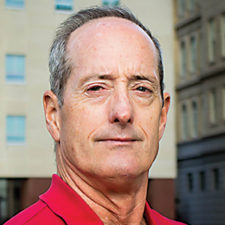 Ryan Paris is a radiation safety specialist and the radon program coordinator with the Virginia Department of Health, Office of Radiological Health.