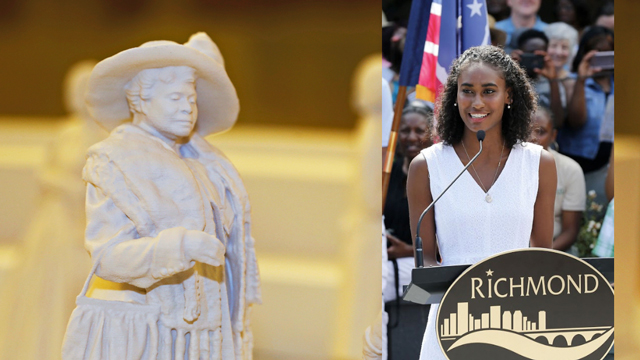 Voices from the Garden: The Virginia Women’s Monument, slated to be dedicated in October 2019, gives Liza Mickens yet another reason to be proud of her great-great grandmother, Maggie Walker. Walker, the first African American woman in the United States to found and charter a bank – St. Luke Penny Savings Bank – is one of twelve women being honored with the new monument on Richmond’s Capitol Square.

“She gave women, as well as African Americans in general, the opportunity for economic empowerment,” says Mickens who is in her last semester at James Madison University as a communications major.

Voices from the Garden: The Virginia Women’s Monument is the nation’s first monument designed to celebrate the remarkable women who made significant, but often unrecognized, contributions and accomplishments in a variety of fields and endeavors over the 400-year history of Virginia.

When completed, it will include twelve bronze statues of historic Virginia women. The life-size statues will be placed in a granite plaza where visitors can come closer and experience their powerful stories of trials and triumphs.

The monument also features a glass Wall of Honor inscribed with the names of two hundred and thirty notable women from across the Commonwealth. The list is intended to represent the many inspiring Virginia women who made contributions or achievements during their lifetimes. A large amount of blank space will be available for the names of other outstanding women to be added in the future.

Walker’s contributions to the Commonwealth also include starting the St. Luke Herald newspaper and St. Luke Emporium. “She was the largest employer of black females in Richmond at the time when black women were starting careers in servitude in taking care of other people’s children and cleaning people’s houses,” says Mickens. “It’s so important that she is recognized in this monument.”

“I was a senior in high school then,” Mickens says of her grandmother’s passing. “Now that I’m older I do have more questions about the family. We have a great relationship with the National Park Service and I go through their archives. I go through my great-great grandmother’s speeches. It’s so fascinating to me to see what language she was using to address her people.”

She is impressed by Walker’s strongconnection to family. “She acquired her home at 110 ½ E. Leigh Street and did renovations to accommodate family,” Mickens says. “She added twelve rooms.”

Walker’s home in the Jackson Ward neighborhood is now a National Historic Site. “My grandmother remembered growing up and playing there,” Mickens says.

Unveiling the statue of Maggie Walker in 2017 at Broad and Adams Streets was an honor for Mickens and “such an accomplishment for my family,” she says. “That crowd blew me away. It showed how Maggie Walker is so embraced by the community and it shows how strong her legacy is today.”

Mickens sees Walker as a “woman far ahead of her time.” The new Virginia Women’s Monument will showcase women like Walker who are “creating history,” she adds. “There are a lot of women from different walks of life who will be honored, and they are leaving room for other women. The monument is a reminder and a remarkable opportunity to showcase these stories. No matter what part of Virginia history you come from, it all needs to be recognized.”

To Mickens, history is an inspiration. “It’s a reminder we can continue to change the times,” she says. “My great-great grandmother’s dying words were ‘have faith, have hope, have courage, and carry on.’”

The monument will feature statues of:

More information about the monument, the twelve women who were selected to be cast in bronze, and the names of those on the Wall of Honor can be found at the Virginia Women’s Monument.