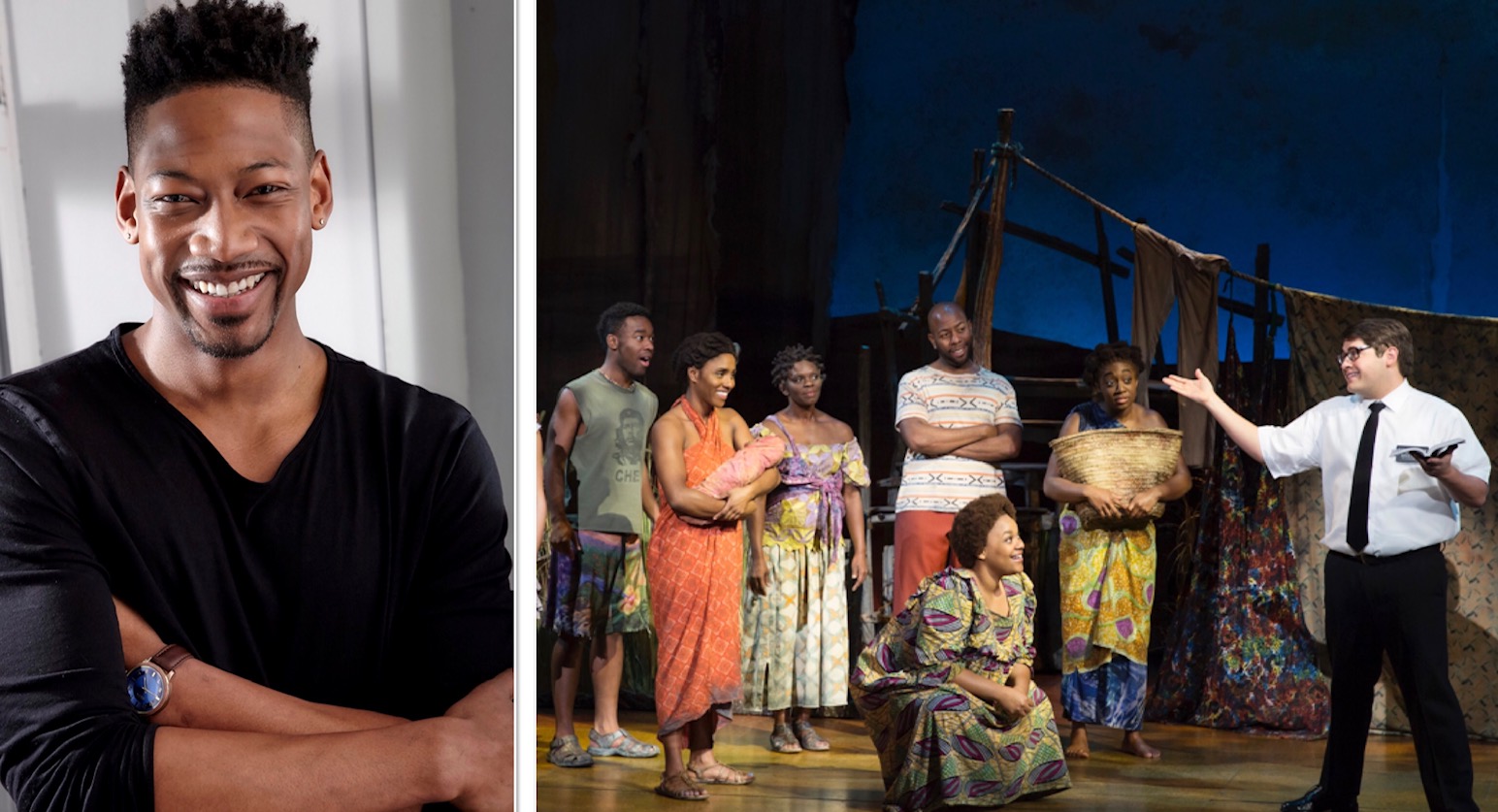 When Josh Marin moved to New York in 2014, his goal was to star on Broadway. He’s one step closer to that goal with his role in the touring production of the Broadway musical, The Book of Mormon, opening at Altria Theater next Tuesday.

A 2012 graduate of VCU with a BFA in theatrical performance, Josh is taking on his first national tour with the 9-time Tony Award-winning The Book of Mormon. During his time in Richmond, he worked with a variety of theatres including Virginia Rep where he starred as Harpo in the 2014 production of The Color Purple and Benny in the Tony Award-winning musical, In the Heights.

Having a national tour on your resume is a great career move – one reason he was eager to book the tour. “The biggest thing for me is my career,” he says. “Doing a big national tour gives you exposure to a lot of different cities and experiences.”

Knowing the gist of the show, it was important for Josh as a faith believer to research the production and really understand what it’s all about. Touted as “the best musical of the century,” the show follows the misadventures of a mismatched pair of missionaries sent halfway across the world to Uganda to spread the Good Word. The show is outrageous and often offensive, but it’s downright hilarious and has a definite positive message.

“You can’t take the show at face value,” Josh says. “There is a lot going on that makes it a powerful piece of theatre – friendships, crossing the lines of people you don’t interact with, and understanding them. The show has a big heart. It says we are all similar people. As human beings, it’s our responsibility to take care of the planet.”

People seeing The Book of Mormon have to recognize that the show’s creators are Trey Parker, Robert Lopez, and Matt Stone. Parker and Stone created the biting animated comedy South Park. Lopez co-wrote the music for the musical Avenue Q, Frozen, and Coco.

“This is a dynamic piece of theater. It’s super current. It spans generations,” Josh says, adding that he understands the show can be a little shocking to some people.

In The Book of Mormon, the two naive missionaries that travel to Uganda have to learn how they can fit in and create change with the Ugandan village and its warlord. “As the journey continues they start understanding each other’s perspective, which paints clear pictures of humor, love and commonality. They discover they are not different from one another,” Josh says.

Josh has been with the tour for the past ten months and has learned a lot about himself. “I’ve learned things I like and don’t like, things I want to accomplish,” he says. “I was able to be with myself in a different way than when I was living in New York. I was learning to grow as a person.”

On stage, he’s learned how to take care of his voice and his body in order to have enough stamina for the duration of the show’s run – eight weeks in this case. “I understand when I can pull back and conserve vocally, and when I can have vibrato so I can make it through the week,” he says, adding he always wants to push himself and grow. “You have to learn how to make it fresh every night.”

In the future, Josh would love to be part of an original Broadway cast. He would also like to be part of a Netflix or HBO series. “I want to challenge myself in a different way,” he says. “The biggest thing for me is to have a big enough platform to touch, change, and inspire somebody.”

He loves to hear from fans that reach out to him. He remembers one young girl who sent him a message to thank him for the work he does on stage. “You inspired me to go after my passion to be an actress,” she told him. “That is the type of conversation I love to have,” he says, noting one day he would like to establish a foundation or program for youth that don’t have the opportunity to act. “I want them to experience the beauty and magnitude of the theater.”

Josh, who is extremely grateful for all that he has, lives his gratitude on a daily basis. “You have to stay in gratitude,” he says. “I want to be able to communicate that with the platform I have. I didn’t do this on my own. It took a lot of help from friends, family and relationships. I believe God is the end all, be all. You have to have that faith component to remain positive and faithful.”

The Book of Mormon opens Tuesday, March 26, and runs through Sunday, March 31, at Altria Theatre. For showtimes and ticketes, go here.

Read more about Josh in a Q&A from RFM here.