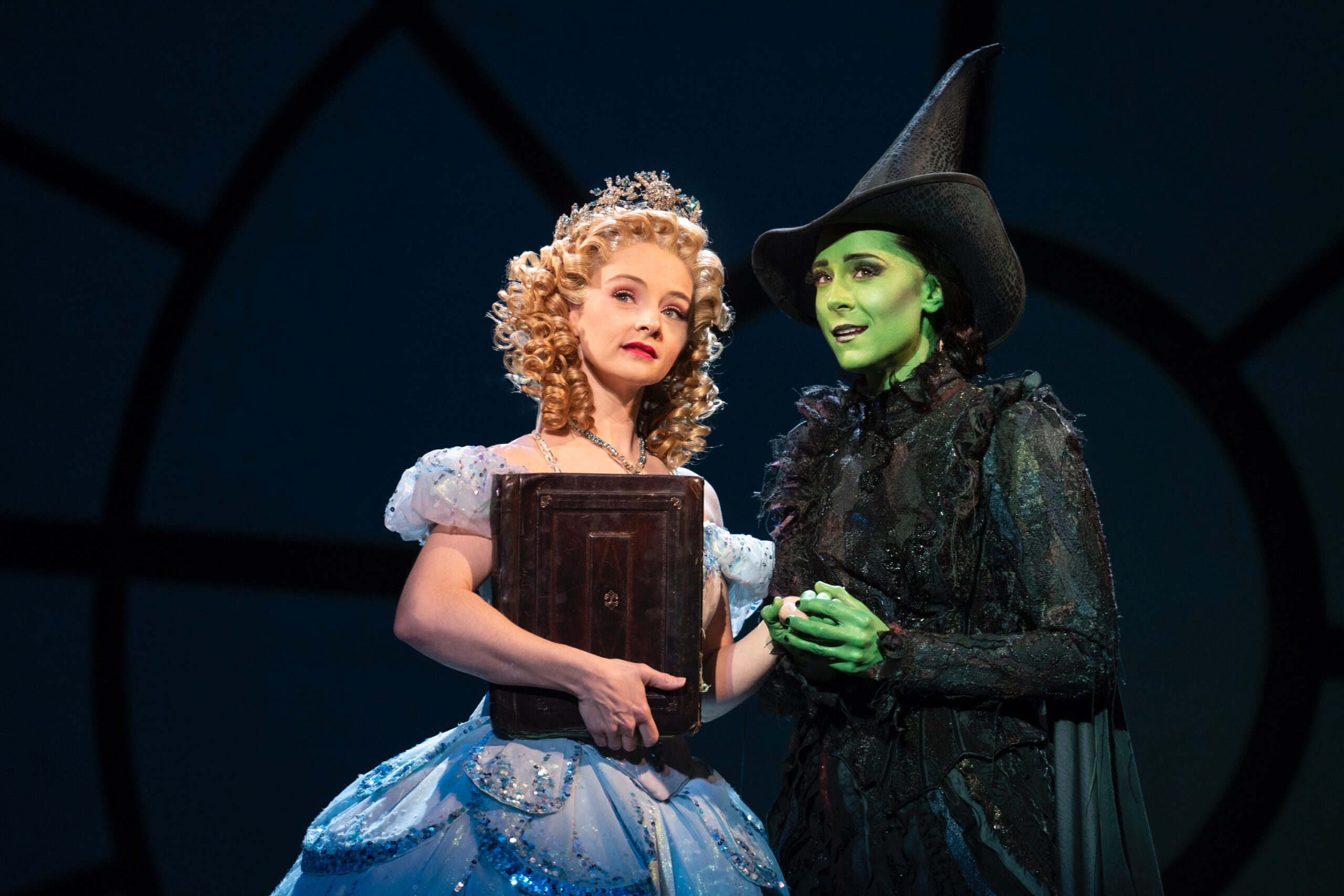 [Photos by Joan Marcus. This article was originally published in 2014 and has been updated.]

Live theater has been dicey with my boys since the first giraffe walked onto the stage of Lion King. Even though they’d been going to live theater since they were five, the Lion King experience immediately became my boys’ gold standard for theater. Ever since, whenever we see a show I ask if it was as good as Lion King.

“Of course not, Mama,” is the response.

When I saw that Broadway’s Wicked was about to hit Richmond, I immediately Googled it’s appropriateness for kids. I’m one of those parents who worries that my little flowers might be marred by mainstream culture. I wanted to assess: Was Wicked geared more to girls or to boys? Were the themes too adult? Would something in the show set off my parent-alarm (which my son calls my “paranoid alarm”)? If you have the same questions, the answers are: no, a little, and not too much.

The Broadway show Wicked is based on the novel Wicked: the Life and Times of the Wicked Witch of the West by Gregory Maguire (which is definitely not for kids) and is the prequel to the 1939 Wizard of Oz movie. The show opens just after the witch is declared melted. But the elaborate clock-stage turns us back in time to a world that has never heard of Dorothy or Aunty Em. We meet two girls – Galinda (Glinda the Good) and Elphaba (the Wicked Witch) – who are forced to room together at boarding school and eventually became lifelong friends.

From their initial meeting, the songs (including “Defying Gravity,” “Popular,” and my favorite “For Good”), the soaring singing, and cool storylines unfold connecting every dot to that turbulent moment when a house lands on the Wicked Witch’s sister.

So, who will like Wicked more – boys or girls? Well, Galinda is a fairytale version of Reese Witherspoon’s Elle in Legally Blonde and has the wardrobe to prove it. Some of your kids will adore Galinda’s frothy pink frocks, rows of sparkly shoes and hilarious “it’s all about me” one-liners. They may even turn an eye to the Wicked Witch’s costume that boasts a black sparkly phosphorescence glamour.

On the other side of the coin, my boys – who are eleven years old – didn’t notice that Galinda had pretty dresses (I asked and they acted completely unaware that dresses had been involved), but they can tell you about the monstrous overhead dragon, the flying monkeys, Elphaba’s dramatic ascension into her full power, and the impressive facade for the Wizard.

Is the premise too adult? Yes and no. Yes, because the core of the story is about a man, a woman, and a woman scorned. My prissy-self didn’t like the amount of kissing and the quick – but funny – reference to something quite adult that hopefully flew over my sons’ heads.

Is it worth the ticket price for kids? Under two years old aren’t allowed in Altria Theater. The fact that the show is two hours and forty-five minutes long (including intermission)should help you decide your younger kids can handle it. The official Broadway recommendation is eight and up. I agree that if your kids are at least eight and are experienced theater attendees, then they’ll love Wicked. If your kids haven’t been to many live shows, I’d forgo Wicked for now and start them on shows like Lion King, Seussical, Peter Pan, and Shrek the Musical.

Overall the show’s sub-themes are perfectly PG – very little to make an uptight parent squeamish. In fact, a lot of the show asks us to think hard about popularity, being shut out of a peer group, and how character and morals develop even while living in a politically correct bubble. Galinda – with her elaborate puffy ego to match her frilly clothes – eventually develops from a pouf ball who cherishes popularity, beauty, and “projects” (that honor her self-absorbed values) to wanting more from her life.

It may be cliché to say, but many of us have run the girl-gauntlet and experienced feeling being shunned and left out. Wicked reminds us that our culture demolishes girls who aren’t classically beautiful or at least paying homage at the salon. While most of us haven’t experienced the Galinda ego (from the inside), we’ve certainly known girls who posture like Galinda with her attitude asking, “It’s good to see me, isn’t it?”

I loved that my boys were exposed to themes that involved choosing a thoughtful life over a frothy-party life. And I also like that they’re starting to chew on the idea that life isn’t always as simple as Darth versus Luke. It’s new for them to consider that the Wicked Witch of the West had layers – and was framed.

Wicked also has a political theme that involves a sinister wizard and his sidekick who were attempting to silence a group of Oz citizens. I’m pretty sure this particular theme was ignored by my boys due to the dragon and monkeys and company, but I plan to bring up the topic and talk with them about the disenfranchisement of groups of people.

The two leads – Galinda and Elphaba  – are powerhouse singers who blew the roof off the Altria when we saw it and took the audience along on a rocket ride to the stars. In fact, the entire cast of Wicked are proof that aliens live among us. Mere mortals don’t sing, act, dance and toss out one-liners with such aplomb unless they’re from a galaxy far, far away.

When my son, Matt, saw me writing this article he said, “Make sure people know that Wicked is a good show and worth the money.”

Better than Lion King? I asked. His brother yelled from the other room, “equal!” Matt shook his head and said, “much better.”

Wicked from Broadway in Richmond is showing at Altria Theater August 31 through September 11, 2022. Tickets are priced at $25 to $162.

A limited number of Wicked lottery tickets will be made available for each performance. The Wicked digital lottery is open for entries the day prior to each performance, from 10 a.m to 4 p.m. Lottery winners will be randomly selected and contacted via email to process their payment; tickets will be available at Will Call for pickup  one hour prior to showtime. Lottery tickets are $25 each. Maximum of two per person.

Wendy irvine is a family travel writer who recently relocated to the East Coast and a regular contributor to Trip Advisor and Expedia online, as well as local and national magazines. She homeschools her twin boys and lives with one foot in RVA and the other in Atlanta. Visit JellyFishinJuly.com for more from Wendy on the reality of family travel.

In-person voting for the November 8, 2022 general election began September 23 and will continue…