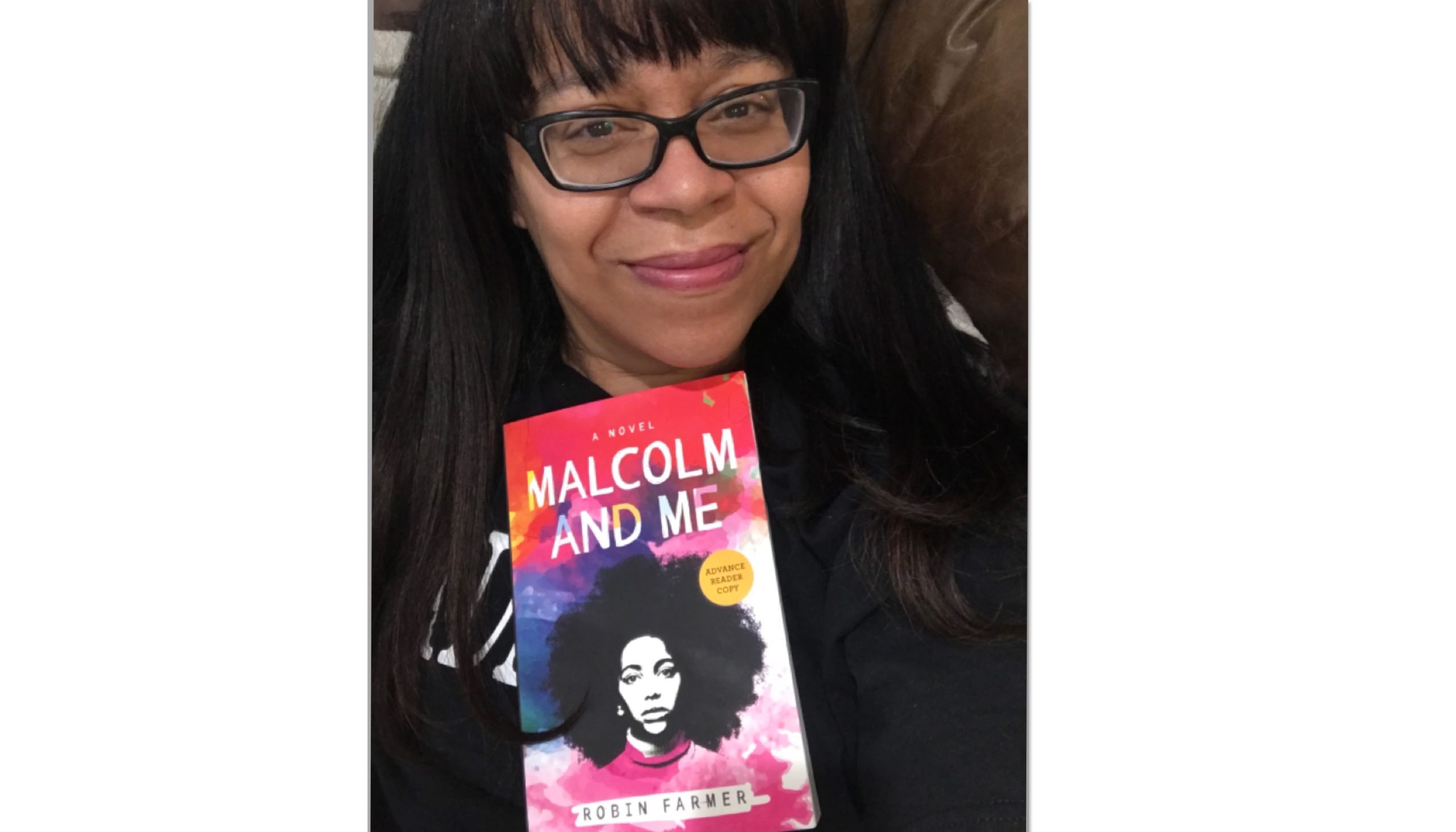 Robin Farmer’s new book, Malcolm and Me: A Novel, is as relevant today as it was when the author was growing up in the 1970s. The young adult publication is based on an incident during elementary school that changed the African American writer’s life forever.

That moment in class at the predominantly white Catholic school she attended in southwest Philadelphia is etched in her memory. She was eleven years old when her homeroom nun asked the question “Why did Thomas Jefferson write the Declaration of Independence when he had slaves?” Farmer answered, “Because he was a hypocrite.”

“I said it with my whole heart. There was no malice,” she says. “I thought that was the answer. Apparently Sister did not. She said, ‘How dare you talk about one of our forefathers like that who built this great nation?! Get out of my room and go back to Africa.’” And with that, Farmer was suspended from school.

In the 1970s when it happened, that type of situation wasn’t publicized or talked about. So, Farmer didn’t talk about it. “It was traumatic for me,” she says.

In 1976, she wrote about the event when she entered the first national Black Awareness Essay contest. The winner’s picture was published in Right On! magazine, which is no longer in print. “I won first place in the national competition. That experience validated that maybe I could write one day,” she says.

Farmer started thinking about writing a book after reading To Kill A Mockingbird in elementary school. Her writing career includes twenty-one years at the Richmond Times-Dispatch, covering everything from education to diversity. She has also published articles in Richmond Family Magazine.

Over the years, she received a writing fellowship and also attended workshops and residencies. She didn’t write about her experience with the nun again until applying for her fellowship at University of Michigan in 2000.

“When you get a fellowship, you have a year of reflection,” she says. “I thought about what the incident meant. All of it was swirling in my head.”

Farmer had studied screenwriting and decided to write the story as a screenplay. She sent the screenplay to actress Keke Palmer’s agent who asked Farmer to send Palmer the screenplay.

After Palmer’s agent told Farmer it wasn’t right for the actress, Farmer put the screenplay aside.

She became serious about writing a novel in 2015 after attending the Djerassi Resident Artist Program in California that year. The real moment of clarity for Farmer came when the executive director of the program made the remark “you only get here by invitation and we only invite artists.”

“Once I thought of myself as an artist, everything changed,” Farmer says.

That same year, Farmer’s house caught on fire and the house had to be rebuilt. “As I am watching my house burn I was in a state of shock. At some point, I looked at my house and said at least I am alive to finish my book. That fire lit another kind of fire in me,” she says.

Malcolm and Me: A Novel 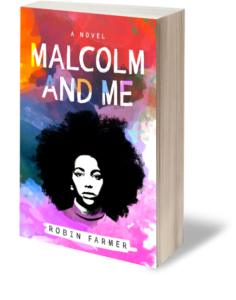 Farmer’s book, published by Spark Press, was scheduled to be released in June 2021. The novel’s release date was moved up to November 17 in response to current events around racial reckoning and politics that mirror the seventies.

For ages thirteen and up, Malcolm and Me is about Roberta, a young teen during the 1973-74 school year, and her search for this illusive thing called the truth.

At the time, Roberta is reading the story of Malcolm X, a person she idolizes. “Roberta is in the eighth grade when Malcolm X, who also attended a predominantly white school, has his teacher call him the N word,” Farmer says.

Farmer said two main themes drive the book. “The book is about hypocrisy,” she says. “It’s also about how divorce impacts kids. Roberta’s parents were having trouble in their marriage. It focuses on a changing relationship for the better.”

Having the book published “crosses a big to-do off my long bucket list,” says Farmer.

“Toni Morrison said if the book you want to read hasn’t been written yet, then write it. That’s what I did, and I hope this book sparks intergenerational discussions.” 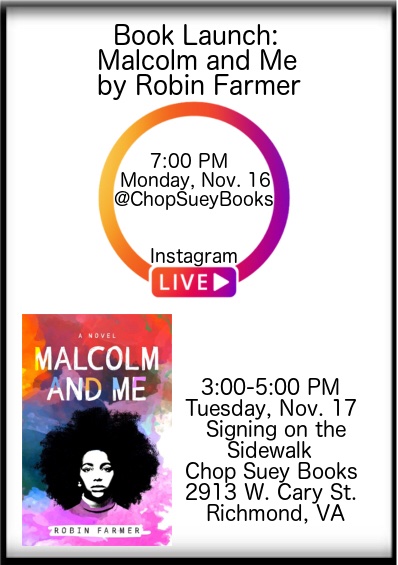 Malcolm and Me: A Novel is available at a variety of outlets that include Amazon, Farmer’s website, robinfarmerwrites.com, Target, bookshop.org (the online alternative to Amazone that lets book lovers support local booksellers), and at Chop Suey Books in Carytown. Farmer will will participate in an online interview with Chop Suey on Instagram on Monday, November 16, and sign books outside of Chop Suey on November 17 and at 7 p.m.