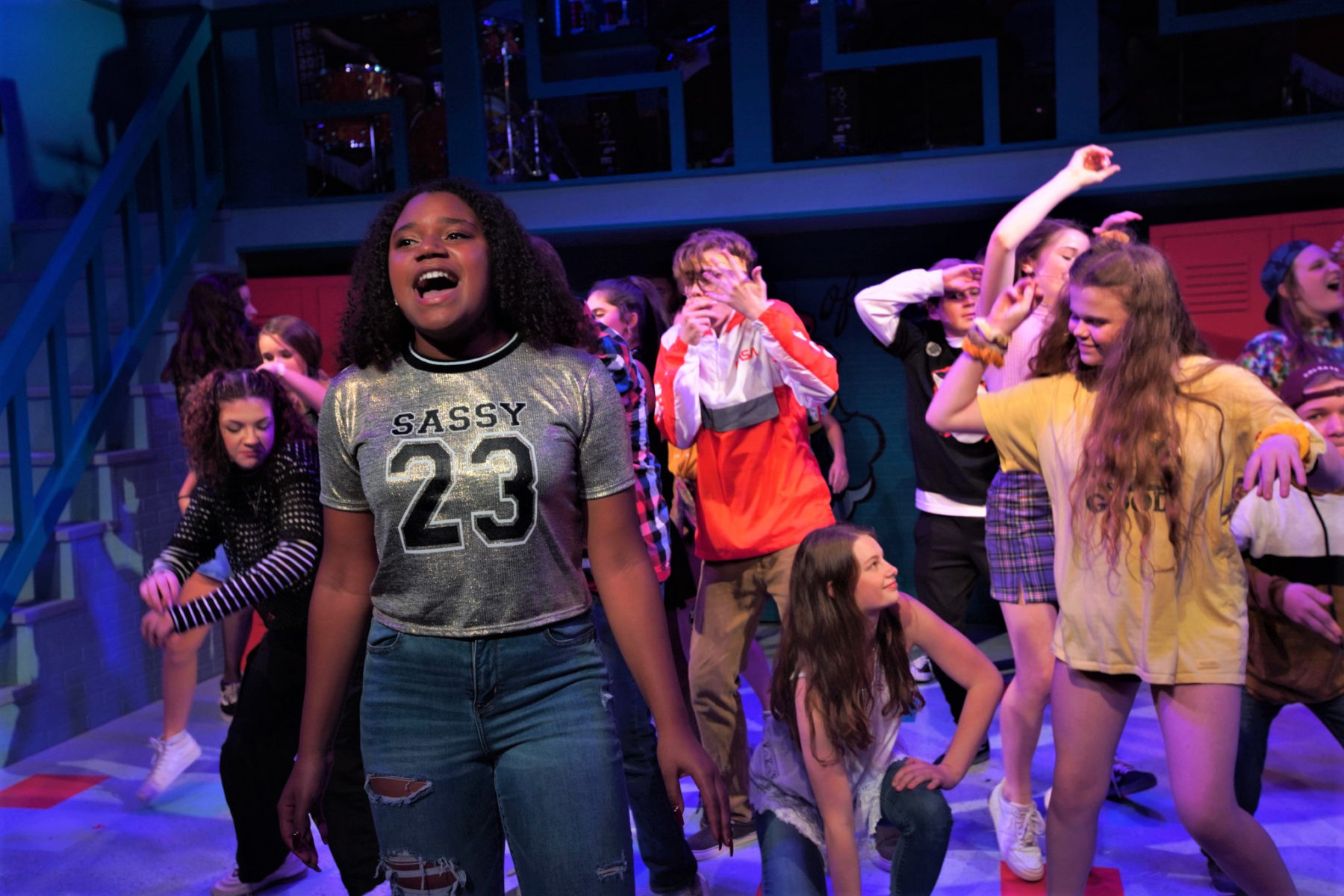 When my oldest daughter turned thirteen, her Godmother gave her the soundtrack of the first and only all-kid Broadway show ever produced. From that moment on, my whole family was hooked on 13. That was ten years ago.

Today, I can’t say enough good things about the music and message of this show, produced in conjunction with Cadence Theatre and showing through November 17 at Virginia Rep’s Theatre Gym.

The play follows the tumultuous preteen life of Evan Goldman. Transplanted from trendy and multi-cultural New York City to a sleepy Indiana town after his parents divorce, Evan remains committed to staging the grandest Bar Mitvah event ever – which he quickly learns shouldn’t be difficult at Dan Quayle Junior High School. When he first moves to town, Evan finds a new friend in neighbor Patrice (played by Violet Craghead-Way). Once school starts in the fall, things change quickly when Evan learns that Patrice is not in the popular group. The politics of trying to kiss up to the cool kids drives the plot as Evan schemes to get Brett the jock (Cohen Steele) a date with the cheerleader of his dreams, Kendra (played by Caroline Johnson).

You’ll meet all the characters as you travel back to middle school – geeks, jocks, emos, posers, beauty queens – in this rock musical from Tony Award-winning composer Jason Robert Brown.

The all-youth cast of 13 is large and it alternates nightly, so I’ll give my shout-outs based on the night we saw the show. It was a packed house and from observing the row in front of me, I assumed that the family of Josh Chapman, who played Archie the special needs kid, was in attendance. I later learned this was not the case, as everyone in the house – family and non-family alike – was blown away by Chapman’s performance. Chapman’s acting and vocals were top-notch from start to finish with nary a miscue or crack.

Evan Dymon as Evan Goldman was another standout on opening night, especially in his duets, as his voice blends perfectly with both geeky girlfriend interest Patrice and geeky special needs friend Archie.

Funny, realistic, and cutting in a Mean Girls kind of way, the characters of 13 are tropes of the typical middle school experience your kids may or may not encounter every day. Parents should know that Brett the jock says dumb, insensitive things, and Kendra the cheerleader is predictably shallow. In a couple of very funny numbers, Brett’s sidekicks, Malcom and Eddie, provide very obvious comic relief. Oh, and Kendra’s frenemy, Lucy (Anjali Sharma), is doing some scheming of her own to date Brett the jock, so of course, she is pegged as the stereotypical fast girl.

As a parent, I’ve always appreciated the innocuous introduction the arts can provide to more complicated subject matter. The only thing semi-mature in 13 is discussion of “the tongue” – as in, French kissing. There is also a song set to a viewing of a scary movie that contains some PG-13 language, but by this point you might be laughing too hard to hear it clearly. As a whole, the play provides a ton of conversation starters for the way home. As a matter of fact, the program also has a discussion guide exploring kids’ emotions.

Director Anna Senechal Johnson does a fantastic job of keeping the kids connected onstage and the action moving. My daughter and I were a touch worried that the stage of the Theatre Gym wouldn’t be large enough to hold the cast of 13 and its impressive ensemble numbers, but that did not prove to be the case. The sets are perfectly crafted, and there is room for a few dance numbers that we didn’t expect and the impeccable house band, which is on stage throughout the production. While at its heart, the show and its coming-of-age message are meant for about 12- to 15-year-olds (maybe eleven, depending on the child), older teens and adults will enjoy it thoroughly.

With no intermission and a run-time of an hour and forty minutes, the show wraps up very neatly with a life lesson about growing up and fitting in – and the important realization that guess what? You don’t have to. Not at thirteen. Not at thirty. Not ever. In the end, Evan has his Bar Mitvah and all the right people show up. If you want to know who that is, you’ll have to see 13 at the Theatre Gym at The Rep, with or without your young teens.

13 runs through November 17. For show times and tickets, go here.

Read more about the cast of 13 in Just Joan: RVA Storyteller.